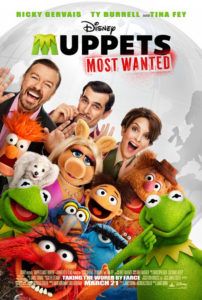 It seems like every other Muppet movie follows Jim Henson’s lovable creations on a road trip—either to get the band back together for the umpteenth time, stage a production in a new and challenging venue, or even carry out another daring heist. Muppets Most Wanted, the seventh sequel to the 1979 original, combines these familiar Muppet situations in a vehicle for their comic routines, musical numbers, and celebrity guest appearances. In other words, everything we’ve come to expect from a Muppet movie. Although its predecessor from 2011, simply titled The Muppets, revived the franchise for a new generation through its edgy humor and the cartoonish-yet-endearing qualities of its animated human stars (Jason Segel and Amy Adams), Muppets Most Wanted makes up for what it lacks in humanity or engaging characters with catchy, hilariously written musical numbers.

Along with producer and co-writer Nicholas Stoller, Segel wrote and provided the creative ambition to Disney’s 2011 hit, which made $165 million in box-office receipts. Both Segel and Adams, who were the focus of The Muppets, are conspicuously absent here both in front of and behind the camera, leaving the story to Stoller and director/co-writer James Bobin. But given the absence of a human protagonist, they place the bulk of their screen story on the felty shoulders of Kermit and company. From the self-referential opening song “We’ve Ordered a Sequel”, in which the characters acknowledge their part in the film and call attention to how sequels are often lesser than their predecessors, expectations are set. Not only does the audience wonder if indeed this sequel will prove the trend of fading quality, but the first song proves so entertaining you can’t help but ask yourself how they could top it.

Muppets Most Wanted occupies a familiar European tour sequel setup, following everything from National Lampoon’s European Vacation to Ocean’s 12. After their breakout show in Hollywood at the end of The Muppets, the gang is approached by Dominic Badguy (Ricky Gervais), a shifty talent manager in cahoots with Constantine, a nefarious criminal mastermind who could also be Kermit’s identical twin. Constantine and Dominic arrange a switcheroo in which the Russian-accented Constantine takes Kermit’s place, while Kermit is deported to a Russian Gulag under warden Nadja (Tina Fey). None of the Muppets except Animal notice the change, though Constantine’s behavior, which includes a proposal to Miss Piggy, is very un-Kermit-like. Meanwhile, Dominic’s proposed Muppet Show tour through Europe allows him and Constantine to infiltrate a number of high-profile museums to steal artifacts that will eventually give them access to England’s Crown Jewels. Onto the criminals’ scent are a French Interpol agent (Ty Burrell) and a CIA agent, the Muppets’ own Sam the American Eagle.

As the ho-hum plot drags out over a protracted 1 hour and 53 minutes, the scenario is enlivened by the colorful and catchy musical numbers. Bret McKenzie (one-half of Flight of the Conchords, together with Germaine Clement) tackles songwriting duties and his efforts are just as characteristic and eclectic, just as silly and musically diverse as the songs from the Conchords’ output. (NOTE: Bobin co-created the HBO series Flight of the Conchords with McKenzie and Clement.) Fey’s adorable performance of the doo-wop gem “The Big House” may steal the movie, while McKenzie’s brand of oddball staccato lyrics is hilarious in Constantine’s “Stick with Me”. The entire soundtrack deserves recognition, as I’m hard-pressed to think of the last movie musical which delivered such consistently memorable songs.

Much of the humor in Muppets Most Wanted derives from the staging of these musical performances with the movie’s impressive cast of celebrity cameos. In three numbers performed in the Gulag, including a cover of “Working in the Coal Mine” by Allen Toussaint, Clement appears as a Russian prisoner beside fellow inmates Ray Liotta (who must love Muppets; he also appeared in Muppets in Space) and Danny Trejo (as himself). Other cameos are less substantial, with a number of big names delivering one line of dialogue for a brief moment of audience recognition. The names include Christoph Waltz, James McAvoy, Stanley Tucci, Frank Langella, Tom Hiddleston, Saoirse Ronan, Chloe Grace Moretz, Toby Jones, Sean Combs, Salma Hayek, Zach Galifianakis, Celine Dion, Lady Gaga, Tony Bennett, and others.

Various plot strains carry on far too long and some of the humor falls flat between songs (notably the tiresome anti-French jokes propelled by Burrell’s character and the ill-timed villainousness of Russians), while the wedding climax couldn’t be more of a cliché. And with the absence of a human protagonist, Muppets Most Wanted calls our attention to how the Muppets themselves, though hilarious in a comic gag or satire, serve better in comic relief supporting roles and rarely drive the story. If Disney and Bobin continue to make Muppet movies, their next task in their ongoing modernization should be to imbue Henson’s beloved characters with dimension or a greater conflict to overcome. Bobin and Stoller’s movie, while energetic and filled with funny moments, rarely engages the way earlier Muppet movies have. Luckily, any quibbles the viewer may have are dismissed by McKenzie’s charming songs, which on their own make this Muppet Show worth the price of admission.