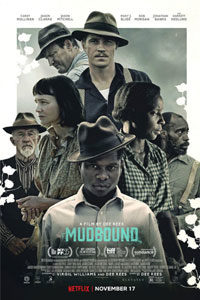 Dee Rees’ Mudbound is about the things that keep people apart and bring them together. A sprawling tale of enforced racial segregation under Jim Crow laws in the Mississippi Delta, the film was based on Hillary Jordan’s acclaimed 2008 debut novel. The film’s setting reflects a disturbing time in U.S. history when white men compelled their states to circumvent the Fourteenth Amendment of the Constitution by creating laws that deemed people of color “equal but separate,” resulting in systemized racism that lasted until 1964 (on paper). Rees and co-writer Virgil Williams have adapted the best-seller into a novelistic period piece that captures all the ugliness and misery of its setting. But Mudbound offers more than a civil rights drama—it also contains elements of a Southern Gothic romance; a feminist struggle for identity; and a somber coming-home-from-World War II narrative, worthy of comparisons to The Best Years of Our Lives (1946). An intimate epic assembled in a loose literary narrative, the film somehow finds a hopeful note among the discordant time that continues to inform the country’s current division.

Most of the film takes place on a stretch of Mississippi farmland. Fulfilling his dream of operating a farm, the rather narrow Henry McAllan (Jason Clarke) relocates his wife Laura (Carey Mulligan), their two young daughters, and his venomous racist-of-a-father Pappy (Jonathan Banks) to their newly purchased property on a Memphis cotton farm. Having been swindled out of leasing a farmhouse, Henry’s family must live in a dilapidated shack that makes Laura question whether she’s suited for farm life, the pervasive need for violence, and the presence of mud everywhere. Just down the road from the McAllans are the Jacksons, an African American family sharecropping under similar conditions. The community preacher Hap Jackson (Rob Morgan) and his wife, Florence (Mary J. Blige), raise their children with the hope of owning their own farm someday. In their current situation, they remain employees of the McAllans, and subordinate in the prevailing social dynamics (hence the title). Bad weather and a nasty fall set the Jacksons back even further, while those same complications place the McAllans in similar hardships, leading to a distant bond between the mothers, Laura and Florence.

Elsewhere, Henry’s younger brother Jamie (Garrett Hedlund), a decorated bomber pilot, returns home from the war, transformed from his prewar status as a cocksure charmer (who clearly has more chemistry with Laura than her husband) into a self-destructive drunk with PTSD. The eldest Jackson son, Ronsel (Jason Mitchell), also returns home from overseas after serving in General Patton’s “Black Panthers,” an all-Black tank battalion. Ronsel, who faced none of Mississippi’s brand of cruel prejudice in Europe, and in fact fell in love with a German woman, finds that his heroic service means nothing to his hometown locals who look only at the color of his skin. Feeling detached from their families upon coming home, Jamie and Ronsel bond over their shared service, a similar loss of friends over there, and a mutual affinity for drink. Jamie doesn’t care about the color of Ronsel’s skin, and Ronsel calls Jamie “one of the good ones.” Inevitably, Jamie’s vile father, who isn’t above ogling his daughter-in-law during open-air baths, focuses his wretched attention on Ronsel, leading to a breathless climax. 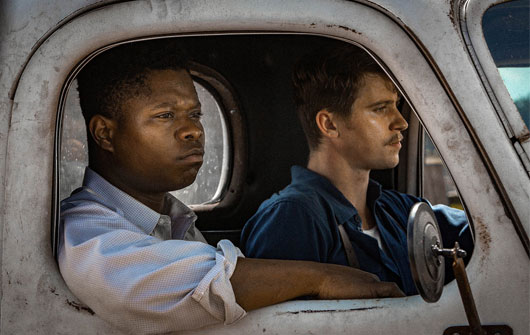 Rees, whose autobiographical breakout Piriah (2011) earned her attention as a lesbian director of color (and therein representing several marginalized groups among directors), reveals an incredible elevation of her talents in Mudbound, both formally and narratively. Rees and Williams remain faithful to the structure of Jordan’s novel, which alternated first-person perspectives between each chapter. In the film, the six main characters narrate their scenes, less in a way that provides crucial plot information, but more to capture their essential feelings, most of which prove impossible to express aloud in this hard-living and suppressive environment. The effect has a Malickian touch to it, although perhaps less lyrical and more organized. Though the shifting perspectives threaten to destabilize the narrative (early on the viewer bonds with Laura, whose trajectory later feels insignificant and passive compared to other characters), the overall narrative structure proves rather conventional when the opening scene teases the film’s climax in a tired device. In any case, Rees balances the alternating voiceovers, creating a coherent use of multiple voices and perspectives—ultimately showing that they have more in common between them than the arbitrary differences that keep them apart.

Mudbound premiered at the Sundance Film Festival earlier this year, where Netflix paid $12.5 million (more than the film itself cost) to outbid competitors and acquire the independently financed production, ensuring that more people would see the film sooner, while all but robbing Rees’ work of real awards consideration. Due to Netflix’s extremely limited theatrical distribution plan, their “originals” technically qualify for the Oscars, but many in Hollywood remain opposed to Netflix’s resistance to theatrical exhibition. This may mean that Mudbound gets overlooked. The film adds to the growing list of quality Netflix titles that have been unceremoniously dumped onto the streaming platform, where they remain hidden beneath the service’s nonsensical recommendations feature and often incomplete new release list. Along with Okja, The Meyerowitz Stories (New and Selected), and Gerald’s Game, Netflix has bowed a strong year of acquisitions and original content. Mudbound belongs near the top of that list.

In spite of some of its occasional customary narrative touches, the film looks carefully polished and composed, as Rachel Morrison’s sharp digital lensing avoids the typical or expected visual approach that might otherwise make Mudbound appear like a mainstream commercial film. The earthy colors and drab costumes capture the agonized state of things in the 1940s Mississippi setting, though Rees ensures the film has a certain beauty too. She also proves to be a fantastic director of actors, giving Hedlund his best role thus far. Mulligan and Blige at times look unrecognizable, the former rail-thin for her character’s brutal farm life, the latter appearing without her usual style. And Mitchell’s performance contains humanity to spare, recalling his film-stealing role as Eazy-E in Straight Outta Compton (2015). Rees manages to bring dimensional shape to most of the characters, making Mudbound into a substantive and emotional experience. More significantly, the film moves among these families with an effortlessness that demonstrates their sameness, while also providing an achingly relevant commentary on how notions of racial inequality prove false and inhuman.