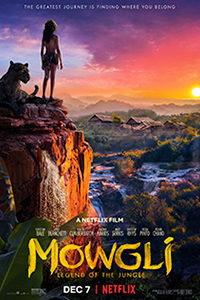 In the first seconds of Mowgli: Legend of the Jungle, the viewer’s brain struggles to reconcile the gap between the human actor Rohan Chand, who plays the titular hero, and his almost-but-not-quite realistic looking CGI animal costars. Descending deep into Uncanny Valley territory, the directorial debut of motion-capture pioneer Andy Serkis employs cartoonish-looking characters in a narrative treatment that’s more attuned to young adult sensibilities—as opposed to the comparatively photo-real look of Disney’s pseudo-live-action The Jungle Book. Typically, Hollywood productions achieve verisimilitude by using thematic severity and visual realism. But the disparity between the film’s bloody, PG-13-rated dramatics and the frequently bogus-looking animals never settles, leaving the viewer unable to reconcile the incongruence between what we’re feeling and what we’re seeing. Despite its impressive roster of voice performers and the appealing, weightier treatment of Rudyard Kipling’s original characters, Serkis’ film is a mass of aesthetic contradictions.

Written by Callie Kloves, daughter of Harry Potter adapter Steve Kloves, the film embraces the well-worn narrative trajectory: Man-cub Mowgli, orphaned when the Bengal tiger Shere Khan (Benedict Cumberbatch) kills his parents, survives infancy with the help of the jungle animals who take pity on him. Bagheera (Christian Bale), a wise black panther, places Mowgli among a pack of noble wolves. The pack’s alpha male Akela (Peter Mullan) allows Nisha (Naomie Harris) and Vihaan (Eddie Marsan) to raise the boy. Baloo (Serkis), a cockney-accented bear, trains Mowgli to become one of the pack. As Mowgli approaches adolescence, the others question his wolfiness, and Bagheera resolves that he belongs in the man-village. At the same time, Shere Khan schemes to divide the wolf pack and take over, betraying the laws of the jungle, enforced by Kaa (Cate Blanchett, whose bookend voiceover sounds suspiciously like her work on The Lord of the Rings trilogy). Meanwhile, the viewer cannot help but feel distracted by how every CGI character looks vaguely like the actor providing its voice.

The screenplay, while boilerplate, also treats familiar scenes with dramatic archness, sometimes effective, sometimes overblown. Once he’s sent to live in the man-village, Mowgli befriends a hunter (Matthew Rhys) and a young woman played by Freida Pinto—in a thankless role, her undeveloped character is nothing more than a symbol of an absent mother. Mowgli’s first interactions with other humans cannot help but tug on the heartstrings, but these scenes are followed by his grim realization that the hunter is killing jungle animals. Consider the fate of Bhoot (Louis Ashbourne Serkis, son of Andy), a cute albino wolf cub and outsider in the pack who, like Mowgli, just wants to belong but probably never will. Of course, the nicest animal onscreen must be killed to demonstrate the harshness of the jungle, and the unflinching quality of Serkis’ vision. Of course, when Mowgli explores the hunter’s tent, he finds Bhoot’s mounted head, in a predictable but no less shocking reveal. And of course, because the film’s CGI animation makes the animals appear slightly anthropomorphized, it looks as though the hunter has mounted a cartoon. Still, that doesn’t make the sight any less horrifying.

Choices such as this seem determined to shock the viewer out of our preconceived notions about The Jungle Book—largely influenced, at least in the United States, by Walt Disney. Kipling’s original tale wasn’t a storybook for children, and Serkis attempts to depict a story closer to its roots. It’s also a showcase for his breakthroughs in motion-capture performance. Although his turns as Golem from The Lord of the Rings or Caesar from Rise of the Planet of the Apes and its sequels remain outstanding, the mo-cap work here looks subpar, in large part due to the cheaper quality of the special FX. Moreover, viewers familiar with Serkis’ role as King Kong in Peter Jackson’s remake from 2005 will raise an eyebrow at how Baloo shares a similarly crooked-jawed, battle-scarred appearance. Fortunately, the film’s generally poor reception won’t likely impact the otherwise talented filmmaker. Serkis has since directed last year’s drama Breathe and currently has an adaptation of George Orwell’s Animal Farm underway.

Mowgli: Legend of the Jungle arrives not with a whimper but an air of grimaced confusion; though, it seemed doomed to fail from the start. The film went into production at the same time as Disney’s more expensive, more polished version, and both titles were due to hit theaters in 2016. Disney’s version arrived first, made oodles of dough, and almost certainly made the original distributors at Warner Bros. think twice about what they had—a high-concept adaptation bound to confuse audiences. After a series of delays, Warner Bros. eventually sold the package to Netflix, and the film debuted on the streaming platform, save for a few isolated theatrical screenings. It’s not difficult to conceive why Warner Bros. backed out, since the film is an aesthetically mystifying production. Watching it, I kept asking myself, “Who is the target audience here?” It’s not for children, whose parents won’t appreciate some of the scarier situations and one particularly horrific death. But teens and adults will undoubtedly respond to the off-putting animal designs and subpar CGI with the due repulsion. And while unlikely stylistic contrasts can often result in more interesting and playful films, Mowgli: Legend of the Jungle never recovers from those employed here.