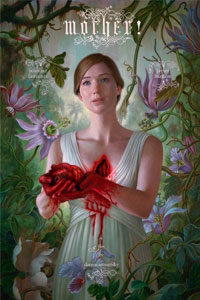 Darren Aronofsky’s seventh film opens with a title card that reads just “mother” in lowercase before adding an exclamation point, which arrives with the sound of a chime no less. In a film overcome by its allegorical intentions, the director of such overt psychodramas as Black Swan (2010), Requiem for a Dream (2000), and Pi (1998) feels that an exclamation point provides inadequate emphasis; only an exclamation point and a chime sufficiently capture the film’s verboseness. How true. The title of mother! suggests the level of histrionic symbolism on which the director operates, always going a level or so too far into the parable, but not far enough into his characters and their emotions. Aronofsky’s script functions solely to serve his metaphoric aims, providing—like his last film Noah (2014)—another environmentalist commentary through characters and a narrative that have no living, breathing dimension. Their identities and trajectories have been shaped by the demands of the central, clumsy, and overreaching metaphor.

The conceit begins with the first frame, before the silly titles, when a singed face appears onscreen for a moment before being engulfed in flames. We’re soon introduced to a benevolent poet (unnamed, as each of the film’s characters are) played by Javier Bardem, who lives in a secluded country house along with his notably younger wife, played by Jennifer Lawrence. Burdened by his apparent and absurd rockstar-poet status, he nonetheless suffers from writer’s block, while she serves as an apologetic and accommodating wife that tries to rebuild their house after an allusive disaster. One night, a stranger (Ed Harris) knocks on the door, and the poet curiously welcomes him to stay, despite the wife’s obvious reservations about an unknown houseguest. The stranger’s wife (Michelle Pfeiffer) joins them the next day, followed by their sons, and a series of other followers—all of whom the poet welcomes, despite his wife’s objections, because they’re fans of his. As the house that she has toiled so desperately to renovate is left in shambles, and she hurriedly rushes around the house and plays host to the guests, the disorienting situation becomes increasingly unbelievable.

Although it might be tempting to describe mother! as a tale of domestic encroachment (like Madhouse from 1990, except unfunny) or a film about the process of artistic creation, its symbolism replaces any sense of story logic, making the metaphoric intent glaring. After all, it takes just fifteen minutes or so of screentime before their marriage stops feeling like a marriage and transitions into a relationship that is about something. Natural characterizations are replaced with allegorical intent. Without much stretch of the imagination, it becomes evident that Lawrence is playing Mother Nature, while Bardem plays a divine figure willing to sacrifice His most beloved creation (and she is a creation) to narcissistically indulge a string of devoted, irresponsible, and ultimately ravenous followers. The houseguests become stand-ins for Christians, who abuse their environment because they want to celebrate God, but also selfishly want a piece of God’s beauty—Nature—for themselves. Several characters represent Biblical icons, from a timeworn Adam and Eve to the bickering Cain and Abel (Domhnall and Brian Gleeson). The metaphoric intent descends into further transparency when mother! plunges into feverish riots, cannibalism, murder, and delusional cultism.

Meanwhile, the viewer is preoccupied with deciphering the film, as opposed to any substantive emotional involvement. Granted, it’s frustrating to watch as Lawrence’s character deliriously tries to keep visitors from sitting on a newly installed sink that hasn’t been properly supported, keep unwanted guests from snooping around the house, or prevent anyone from touching her husband’s mysterious rock—seemingly the source of all creativity and life. Anyone who has had reckless visitors can empathize. Aronofsky’s film, on the scum-level surface, creates a tightly-wound chamber drama of sorts, something reminiscent of Roman Polanski’s tense and surreal Apartment Trilogy. The trouble is, the situation itself isn’t enough for Aronofsky. Every visitor is meant to represent another real-world faction and its relationship with Nature—be it followers who interpret God’s message for themselves or well-meaning-but-crude environmentalists, all of them following their own self-interest and ignoring Mother Nature’s pleas to respect her house. Outside of this surreal and transparent symbolism for the characters and story, nothing about the film makes much sense or earns our sympathy on an essential emotional level.

Sadly, mother! is arguably Aronofsky’s best-directed film yet; it’s the script that’s the problem. Just as he borrowed from Repulsion (1965) to inform Black Swan, he draws from another Polanski masterwork, Rosemary’s Baby (1968), by evoking the same claustrophobic space and sinister domesticity. There isn’t a better filmmaker to steal from for this type of material. Aronofsky’s stylistic command provides a clear layout of the house within the first minutes, and the absence of a musical score allows every creak in the floorboards or echo in the house its due. The film’s sound design is wonderful, punctuated by moments in which Lawrence unleashes her piercing screams later in the film (allegedly resulting in her torn diaphragm). Aronofsky’s longtime collaborator, cinematographer Matthew Libatique’s extended shots follow Lawrence around the confined interiors with tight close-ups that track her face in frantic interactions with houseguests from Hell. The visual palette is appropriately earthy and grainy, leaving the film to look like a 1970s production, albeit infused with occasional CGI when Lawrence touches the house’s walls and senses its dying heart in a crude, digitally created visual that might be unintentionally funny if it wasn’t so self-important.

To be sure, Aronofsky has no time for subtlety, and his nightmarish allegory is less clever than he imagines. Regardless of how well similar themes could have supplied a less glaring filmmaker, the ideas behind the film prove fascinating. It’s a not a film any audience will soon forget. The problem with mother! is not the performances, direction, or even the message (its aim is true); the problem is the hyperbolic approach that marks every aspect of the storytelling and renders the experience hollow. The film offers a worthy critique of humankind’s self-destructive obsession with God over the more substantial reality of Nature, delivered through powerful performances by Lawrence and Bardem (as well as the supporting roles by Harris, Pfeiffer, the Gleesons, and even Kristen Wiig). Aronofsky’s craftsmanship and ability to evoke a gut-punch reaction is undeniable, but his self-conscious methods fail to bring a satisfying or emotional experience by the bloody and apocalyptic finale.