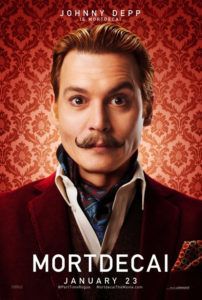 Lowbrow parades as highbrow in Mortdecai, a bauble-of-a-movie hoping to become the next generation of Pink Panther style comedies about an inept detective of sorts. Johnny Depp plays Charlie Mortdecai, a scampish fine art dealer who, well-versed in the trading and thievery of art, occupies a throwback farce akin to Gambit, How to Steal a Million, and the Inspector Clouseau series (all titles from the 1960s). Hollywood already tried—and quite miserably failed—to rehash such material last year with the Coen Brothers-scripted, Michael Hoffman-directed remake Gambit. And Mortdecai is just slightly more tolerable, if only because its cast and production values are top-drawer. Still, this madcap caper exists only to provide an excuse for the movie’s crude zaniness and gratingly repetitive gags.

An all-star cast assembles for director David Koepp, whose experience as the screenwriter of Jurassic Park and Mission: Impossible gives way to his recent, certainly lesser directorial aspirations. Until now, Koepp has proven a versatile workhorse filmmaker with solid genre exercises to his credit. His spooky thrillers Stir of Echoes (1999) and Secret Window (2004) at least benefited from his own contributions to those screenplays, as did his underrated comedy Ghost Town (2008) and his impressive actioner Premium Rush (2012). This isn’t the case with Mortdecai. Koepp directs and scripter Eric Aronson (whose sole credit prior to this was the Lance Bass movie On the Line from 2001) works from Kyril Bonfiglioli’s 1973 novel Don’t Point That Thing at Me, one of the author’s four books about the Charlie Mortdecai character.

Alongside his central star, Koepp wrangles a cast of attractive faces including Gwyneth Paltrow, Ewan McGregor, Paul Bettany, Olivia Munn, and Jeff Goldblum—all of whom take a distant second seat to Depp. The actor’s overwrought performance as a proper, yet absurdist English chap relies on Peter Sellers-level silly mannerisms. Mortdecai’s dim-witted, slight effeminate persona in Depp’s hands feels like the actor combined a number of earlier roles into one (if his Ed Wood and Ichabod Crane had a baby with his Hunter S. Thompson, and became a well-to-do British aristocrat, the child might be something like Depp’s Mortdecai). Followed by his tough, Cockney manservant Jock (Bettany), who’s always getting Mortdecai out of harm’s way, our hero is a bungling idiot. It’s no wonder that a subplot involves his wife Johanna (Patrol) flirting with a former college suitor-turned-MI5 agent Martland (McGregor); we’re constantly asking ourselves what this otherwise intelligent woman sees in such a man.

Mortdecai is all about putting a buffoon into a situation and allowing him to mess it all up. Around him are a number of straight characters, present to smooth things over as he perpetuates out-of-control situations. Jock, Johanna, and Martland each trail behind Mortdecai, picking up the pieces in one manner or another. Much like Trance, the caper itself involves a long-thought-lost Goya painting and a number of unscrupulous parties invested in recovering it. Since Mortdecai is an expert in such things, Martland tasks him to locate the painting, in part to settle the Mortdecai Estate’s past due balance to the country for previous indiscretions. While barely managing to stay alive and not come up with a single original idea, Mortdecai aimlessly floats from one locale to another, and finally takes part in a switcheroo at an art auction.

Several ongoing comedic bits consume the movie. None of them produce a laugh. There’s a recurring bit about Mortdecai’s unfortunate habit of shooting Jock by accident. Another concerns Jock’s talent for shagging random women. Yet another involves the barf-o-rama that ensues after an L.A. party serves bad shellfish. No recurring bit is more prevalent than the one about Mortdecai’s new mustache, which Johanna despises and causes her to gag, in turn causing Mortdecai to gag because he has a “sympathetic gag reflex.” (The gagging bit goes on and on too.) He’s proud of his coiffed upper lip, as mustaches run in his family, and so he stubbornly refuses to shave. Dull repetition also appears as the movie hops from Moscow to London to Los Angeles, and Koepp ties everything together with zoomy transitions that spin the movie’s locations like a cheap CG globe.

Though Mortdecai tries to pass a lesser painting off by hiding a masterpiece behind the surface in the movie’s climax, there’s nothing brilliant underneath this movie (except maybe the posh interiors as shot by cinematographer Florian Hoffmeister). But plot twists and double-crosses seem less important than the prevalence of moustache-, potty-, and sex-related humor. Strangely, the movie has been R-rated for language (one negligible derivation of “fuck”) and brief nudity, but those moments were throwaways and could have been trimmed for a wider PG-13 audience. Indeed, few adults will savor the grueling unfunny and childish brand of humor (for example, Jock’s last name is Strapp). The movie is better suited for younger audiences—namely those who enjoyed the Austin Powers series, or those who might find Depp’s cartoony, over-gestured onscreen presence entertaining, or those who haven’t yet grown tired of this actor’s neverending pageant of outlandish characters.