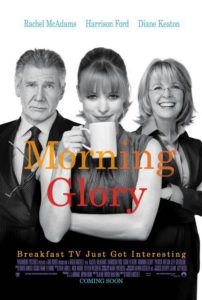 Morning Glory takes a unique approach to your standard romantic comedy. An exceptional twist on formula has the heroine achieving her goals in the end not by finding herself a good-looking beau (although she does that too), but rather by succeeding in her workplace. As a child, the protagonist, played by Rachel McAdams, dreams not of white weddings or snagging a rich hunk; she dreams of working on the Today Show. Everything about the movie—other than this ambition of hers to work in network television—aligns with typical rom-com archetypes, from the uplifting music to the sometimes absurd laughs. Except, her ultimate ambition is driven by noble desires above the genre’s usual “get the guy” frivolity.

When high-energy television producer Becky (Rachel McAdams) loses her job at a low-budget New Jersey morning show, she lands a better job at the IBS network as executive producer of the failing “Daybreak”, a morning chatter show and pseudo-news program. The batty longtime host Colleen Peck (Diane Keaton) receives Becky with animosity and openly expects her failure, as does the rest of the show’s beleaguered staff. But her boss (Jeff Goldblum) hired her to shake things up. She does just that when she puts crabby veteran newsman Mike Pomeroy (Harrison Ford) alongside Colleen as co-anchor. Arriving with his own set of issues, Mike has no desire to end his long, respectable news career with fodder best described as brainless morning diversion, so he resists Becky’s every instruction or suggestion. Only when Becky gets the notice that she has six weeks to improve ratings or the show is canceled does she take some risks, and that’s when the movie gets fun.

McAdams is incredibly likable in her role, bright and confident, slightly awkward in a rambles-when-nervous sort of way, and yet with enough energy to stand up with the likes of powerhouse actors such as Ford and Keaton. She gives her best performance in those pressure-cooker office situations where she’s forced to handle dozens of problems at once, whereas the sitcom-worthy portions of the movie involving Becky’s dull personal life couldn’t be less interesting. Her undefined, casual romance with IBS evening news producer Adam Bennett (Patrick Wilson) seems perfunctory. The subplot seems suited for those viewers who might resist a romantic comedy in which the love affair exists between a successful woman and her job. What’s surprising is how the filmmakers have not turned McAdams into just a pretty face (which she’s been in Sherlock Holmes and The Wedding Crashers), and instead let her be a strong and successful female character.

Director Roger Mitchell (Notting Hill, Venus) captures the behind-the-scenes chaos of television production with believable frenzy, giving in to those obligatory scenes where someone does something embarrassing and then suddenly realizes (whoops!) they’re on the air. Transition scenes and montages glossing over Becky’s personal life contain a distracting amount of corny pop-music, suggesting about ten minutes of footage could have been cut if only the filmmakers had forgone the hip soundtrack. Mitchell’s greatest strength is his actors. There’s an always-entertaining Keaton to offer some wacky faces and outbursts, whereas Ford plays yet another pompous ass whose soft underbelly is just waiting to be exposed. Goldblum enlivens every movie he’s in by eccentricity alone, Matt Malloy is hilarious as the show’s kooky weather man, and John Pankow earns a smile or two as Becky’s dependable co-producer.

Though the story potential allows it, screenwriter Aline Brosh McKenna (27 Dresses, The Devil Wears Prada) doesn’t infuse any weighty commentary about the state of the modern media—anyway, not enough to earn comparisons to James L. Brooks’ Broadcast News, and certainly not enough for Sydney Lumet’s Network. In fact, Morning Glory defends morning non-news shows, which on principle alone may repel some viewers. But this is light material that entertains with some sharp humor and guilty laughs—as effortless as the intent of “Daybreak”. To steal the movie’s ongoing breakfast food metaphor, it’s a quick and easy donut-on-the-go, retaining a level of rom-com entertainment without sinking to the potentially dull lows of that description.