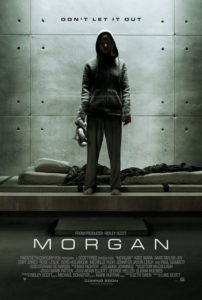 Morgan has a lot in common with dozens of science-fiction stories but doesn’t have any innovative ideas of its own. The film marks the directorial debut of Luke Scott, who understudied as second unit director on Exodus: Gods and Kings (2014) and The Martian (2015) for his father, Ridley Scott. The elder Scott serves as producer on this relatively low-budgeted ($8 million) picture, which boasts slick production design and an even more impressive roster of character actors. The proceedings start interestingly enough but quickly descend into predictable territory, playing like a cheap version of Ridley’s own Blade Runner (1982).

The screenplay by Seth Owen falls somewhere between Splice (2010) and last year’s Ex Machina, both of which involve a group of scientists who set out to engineer a new life-form, only to realize they’re just playing Frankenstein. Played by Anya Taylor-Joy (from The Witch), Morgan, unusually bright and human-like, was engineered from artificial DNA and born in a high-tech lab. After just five years, the creation now looks like a young woman, its every waking moment overseen by a group of scientists, none of whom have left their surroundings in years. Most of them project parental feelings for Morgan, even after “she” removes the eye of an unsuspecting scientist (Jennifer Jason Leigh).

The corporation funding the Morgan experiment responds to the attack by sending risk-management consultant Lee Weathers (Kate Mara) to assess Morgan, as well as supervise a psychological exam. Lee coolly injects herself into the family of scientists, each of them deeply invested in and protective of Morgan: Rose Leslie plays an emotionally fragile behaviorist, Toby Jones is a proud chief scientist, Boyd Holbrook is the flirtatious chef, and Michelle Yeoh receives the name “mother” from Morgan. Vinette Robinson, Chris Sullivan, and Michael Yare also appear on staff. They’re all waiting for a psychologist to arrive and determine Morgan’s future. All the while, Lee watches and doesn’t say much.

There’s a lot of build-up to the interview between Morgan and the irascible psychologist Dr. Shapiro (Paul Giamatti), because it determines Morgan’s future, but also because Lee carries a curious tension. The resulting exchange lacks much psychological depth; instead, Shapiro pushes Morgan to incite a reaction, as though he forgot why he was there in the first place. Once she reacts, Morgan turns into another film altogether. The smart setup leading to a slasher conclusion reminded me of the structure of Hollow Man (2000), the way Morgan just starts killing people off for no reason whatsoever. Rather than explore the many sci-fi concepts behind the film’s promising first half, the first-time director purveys a bloodbath with a few tense bouts of hand-to-hand combat.

A question lingers with the viewer until the final scenes: What was the purpose of creating Morgan in the first place? Vague references to the company’s other experiments with artificially created beings hint that other trials have been successful, whereas others have ended in bloodshed. The final twist is predictable, but ultimately empty since the filmmakers have somehow made an otherwise amazing ensemble cast seem dull and uninteresting. Morgan doesn’t have much to do either, even though her character seems ripe for a study like Hanna (2011) or the aforementioned Ex Machina. Add another half-hour onto this 92-minute thriller and it could have developed each of these characters and left us concerned about their fates.

Most of the audience will be smarter than Morgan. Without really trying, I guessed the twist within the first few moments. So will you. Even so, a good film will remain engaging despite the obviousness of the plot. But Scott’s reliance on mindless action and techno music à la Jason Bourne in the second half feels like a gross mismanagement of tone, particularly after getting settled in with the fine cast. Actors like Leigh, Jones, Giamatti, Yeoh, and a brief appearance by Brian Cox feel shamefully wasted, while Mara spends most of her screen time jerking her head to keep those pesky bangs out of her eyes. It’s all very forgettable in a disappointing way. (For a better film by Ridley Scott’s offspring, seek out Jordan Scott’s Cracks from 2011.)