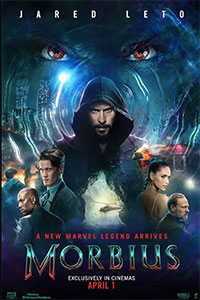 Morbius is Columbia Pictures’ latest entry in its parent Sony’s series of Spider-Man villain movies, which doesn’t take place within the MCU but somewhere alongside it. Don’t bother trying to untangle the various corporate entities and intellectual properties in that sentence (you either understand it or you don’t). Based on the Marvel character created in 1971, the concept is promising enough: Dr. Michael Morbius experiments on himself to cure his rare, unspecified blood disease. Fusing human and vampire bat DNA to create a serum, he accidentally turns himself into a “living vampire.” The pros: he has superhuman strength and speed, a biological form of sonar, the unexplained power of flight, and smoky wisps that trail off him when he moves fast. The cons: he must feed on blood to survive, and when he does, he looks like a hideous bat-faced creature (“You don’t want to see me when I’m hungry,” he warns, evoking The Incredible Hulk). At least sunlight doesn’t affect him like a Bram Stoker creation. Indeed, the setup recalls Dracula combined with Jekyll and Hyde by way of an addiction narrative. But Morbius never lives up to that potential, nor does it supply cohesive comic book movie escapism.

The problems begin with Matt Sazama and Burk Sharpless’ script, which causes only confusion over the many vague discussions about medical science and character mythology. In the first scene, Dr. Morbius (Jared Leto) visits a Costa Rican jungle to capture a swarm of vampire bats. Local legend suggests they feed on humans, though the average vampire bat does not. Are they supernatural bats? Why does his colleague Martine (Adria Arjona) later refer to their genetic material as “vampire DNA” and not “bat DNA?” And why, when he combines his DNA with theirs, can he transform his appearance, make wispy smoke trails, and fly without wings? Do the bats also have those powers? Despite being a scientist, Morbius never asks these questions. Perhaps we shouldn’t either. In any case, after gaining his new abilities, he finds himself plagued with the reality that he will not be able to survive long on his invention of blue artificial blood, which earned him a Nobel Prize (that he rejected for some reason). Will he let himself die before resorting to murder to feed? Or will he embrace his inner beast and feed on innocents?

Although these moral questions linger beneath the surface, director Daniel Espinosa (Safe House, Life) seems more interested in hitting the prescribed beats of a superhero movie. Morbius could be dealing with some serious identity issues, blood addiction, and questions of personal morality. Instead, he spends most of the movie contending with his lifelong friend, Loxias Crown (Matt Smith), whose wealth funded Morbius’ radical and illegal DNA experiments. In a flashback to 25 years earlier, we learn that Morbius calls Loxias by the name “Milo” because, in the Greek clinic where they were both treated by Dr. Nicholas (Jared Harris) for the same blood disorder as children, Morbius had lost someone named Milo. Afterward, he called every new young patient who arrived in Milo’s bed by that name. Unfortunately, the writers don’t make much of this devastating detail, which makes its inclusion even stranger. Rather, it’s only to establish that Morbius must confront his lifelong friend when Loxias sneaks a sample of Morbius’ serum and becomes an enthusiastic killer. 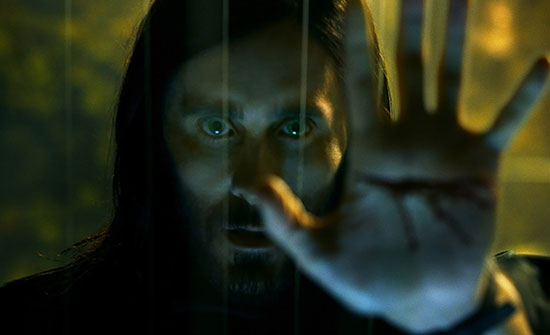 Morbius might have been diverting fun had the cast been more engaged, or the script gave them something compelling to do. Leto plays Morbius in a hollow performance that doesn’t have a personality beyond the character’s singular ambition as a scientist. Behind that beard and long hair, Leto’s look can only be called Christlike (or maybe hipster Jesus, especially when he wraps up those locks in a man bun). Much like Johnny Depp, Leto has become an actor who now only inhabits roles that require iffy accents, fat suits, wigs, color contacts, or other accouterments that do the work. But the problem isn’t so much Leto as the script that hasn’t made Morbius charismatic, funny, dynamic, or memorable. By contrast, Smith’s turn as the insatiable villain as least shows the actor’s willingness to go playfully over the top and have fun with his murderous role. On the periphery, Tyrese Gibson and Al Madrigal play two FBI agents investigating Morbius. Gibson looks wooden and sullen, but Madrigal offers a few funny moments reminiscent of Darren McGavin in Kolchak: The Night Stalker—where, without hesitation and minimal evidence, Madrigal becomes convinced the threat is vampire-related. Harris is mainly wasted, apart from a stirring late-film argument where he and Smith do some real acting.

If the villain and supporting characters prove more memorable than the titular antihero, then Morbius suffers from a common superhero movie malady. It isn’t the only one. Espinosa does the material a further disservice by delivering unintelligible, CGI-heavy action scenes of Morbius and Loxias flying around in two streaming blobs. Then, borrowing a trick from the Wachowskis (or, if you prefer, Zack Snyder), Espinosa freezes the fighting for ultra-slow-motion or bullet time sequences. Most of the action has little spatial clarity, and the writers have done such a poor job of explaining the rules to these powers that the confusing visual hodgepodge has little consequence or investment from the viewer. And, like most superhero movies, Morbius conforms to the PG-13 standard, pulling out the material’s horror roots. Despite the vampire scenario, this is a mostly bloodless movie. So when Morbius drinks bags of chilled red stuff to sustain himself, he never spills a drop. All the while, we cannot help but think about Blade from 1998 and its literal showers of blood. That movie managed to be bloody, true to its vampire trappings, and make a bundle at the box office—all with an R rating.

But Morbius has a sense of going through the motions. It’s not testing limits or delivering a worthy genre mashup; it’s turning over the latest product in Sony’s expanding Spider-Verse. By the conclusion, when the obligatory mid-credits scene establishes plans for a crossover, the movie raises unanswered questions about the character. Is he a hero or villain? The ending is ambiguous to the point of frustration instead of supplying a challenging aspect of the narrative. Usually, such ambiguity and open-endedness might make for a compelling character study. So would Morbius’ condition as a metaphor for addiction or his inner monster. Yet, this movie doesn’t explore these ideas with any depth—it’s content with being another building block in a larger franchise, and not one that feels inspired or even necessary, even though it had every potential to be something different. Morbius is what happens when a studio applies a horror filter to an average comic book picture. The filter may shade the original image differently, but it’s an unconvincing effect.