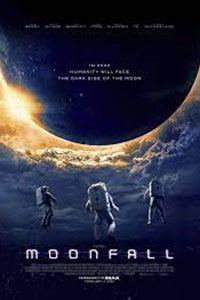 “Mounting Moon disaster!” declares a news anchor in Moonfall, the latest from director Roland Emmerich. Such hyperbole runs rampant throughout this clunky end-of-the-world spectacle, which involves the Moon spiraling toward Earth, signifying certain doom for humanity. The twist: there’s an artificial intelligence living inside the Moon, propelling the collision. Even if you’re a sucker for disaster movies, Emmerich’s latest feels like it was written by, well, an AI screenwriting program. Not so, according to the credits anyway. Emmerich co-wrote the script alongside Spenser Cohen (Netflix’s Extinction) and regular collaborator Harald Kloser. Ever derivative, the director of Independence Day (1996) and The Day After Tomorrow (2004) draws from sources ranging from Stanley Kubrick to The X-Files for his latest disaster fare. Structurally, it’s paint-by-numbers, following the genre design audiences have come to expect. But Moonfall doesn’t feel like Emmerich is having a blast behind the camera, blowing things up and causing mass destruction, like a child in a $150 million digital sandbox—it feels like he’s going through the motions.

Most of Emmerich’s disaster movies adhere to the same formula: A nerdy crackpot or scientist has an out-there theory about a threat to humankind, but the authorities don’t believe him. Then the threat makes a very public appearance, and of course, the leaders now seek his help—and in most cases, reveal that they’ve known about the threat all along. They enlist a hardened, roguish hero, who often has a broken marriage or family trouble, to work with the scientist to save the day from the out-of-this-world danger. Usually, as part of a subplot, either the scientist or roguish hero has a love interest or child who needs rescuing from a comparatively practical situation (you know, for realism). The unlikely duo works together and beats the odds to save the planet from certain destruction, quipping along the way. It’s the blueprint of Stargate (1994), Independence Day, Godzilla (1998), The Day After Tomorrow, 2012 (2009), and Independence Day: Resurgence (2016).

In Moonfall, the well-cast John Bradley (from Game of Thrones) plays K.C., a conspiracy theorist who believes the Moon is a megastructure, specifically a Dyson sphere, and hurdling toward Earth. When NASA ignores his claims, K.C. ends up alongside disgraced astronaut Brian Harper (Patrick Wilson). Together, they partner with Jo Fowler (Halle Berry), acting head of NASA and former astronaut alongside Brian, to convince officials that their plan of nuking the Moon to stop its descent is a bad idea. Instead, our heroes hope to throw together a last-minute trip to space, where they will neutralize the AI propelling the Moon using a souped-up electromagnetic pulse. In an earthbound filler subplot, Brian’s ex-wife (Carolina Bartczak) and delinquent son (Charlie Plummer) face rioters in their race to find safety in the Colorado mountains. Are we seeing the formula yet? What’s supposed to make the familiar proceedings tolerable, despite its commitment to the template, is the movie’s sense of fun and self-awareness, both minimal here. 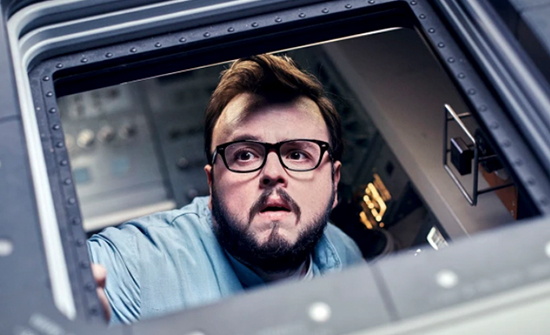 Emmerich’s penchant for this material goes back to The X-Files, the hit 1990s show that helped saturate government conspiracy theories and top-secret alien invasions into the mainstream. Ever since, the director, clearly a fan, has explored these themes in his movies. In Moonfall, there’s even a resident Deep Throat played by Donald Sutherland in a shockingly short cameo. In the scene, Jo seeks to uncover secret files that prove NASA knew about the lunar threat. Sutherland appears in a wheelchair, plagued by secrets. His character delivers a few lines of exposition to Jo, explaining the US government has known about a non-terrestrial presence on the Moon since the 1969 landing. I suspect that Emmerich wanted the scene to play with the furious momentum of the actor’s famous sequence in JFK (1992), where Sutherland expounds on the many factors that led to Kennedy’s assassination. Instead, the moment has no energy and falls flat, lasting less than a minute, before the character impliedly kills himself off-screen.

The problem with this scene, and much of Moonfall, has to do with the editing. Adam Wolfe and Ryan Stevens Harris render even the simplest scenes with a twitchy anti-rhythm that favors rushing forward without establishing cohesive characters or spatial clarity. Even though the movie runs an overstuffed 130 minutes, it would have played better had the filmmakers allowed the scenes to breathe (yes, there may be a better 150-minute version of Moonfall). As is, the characters feel underdeveloped, even by Emmerich’s modest standards. With Wilson and Berry playing dry and humorless heroes, Bradley picks up the slack, delivering absurd lines with convincing readings (“You don’t understand! We’re dealing with a megastructure! Your rules don’t apply anymore!”). Curiously, the script establishes that K.C. has anxiety and IBS issues early on, though it never pays them off with a comic scene of panicked behavior or flatulence. What has the world come to when Hollywood doesn’t take advantage of a fart joke? And aside from an exchange student played by Chinese performer Kelly Yu, every central character is American (or at least an American citizen), which seems strange in a world-threatening scenario—and yet customary for Emmerich.

For all this quibbling about threadbare material and hasty execution, I haven’t mentioned the disaster scenes—the reason to see a movie like Moonfall. When the Moon orbits close to Earth, causing gravity waves and meteorites, there’s some neat CGI, in a knock-off sort of way. However, once the crew arrives in space and tries to navigate Moon debris and dodge a vicious nanobot guard dog, the whole experience starts to resemble a video game. Ultimately, the movie’s best ideas are the most out-there—ancient ancestors from space, a megastructure, colonization, etc.—and the most underdeveloped. But at least Emmerich winks at the conspiracy theorist viewer who believes there’s proof in the films of Stanley Kubrick that he secretly shot the Moon landing for the US government. Note the visual nods to wallpaper from The Shining (1980) and the white void from 2001: A Space Odyssey (1968), then watch Room 237 (2012).

Admittedly, seeing Moonfall was a downer. My wife and I set out on opening night to see the movie with a general audience—not a critics’ screening and certainly not at home. This sort of movie tends to play better with a popcorn-munching crowd willing to meet the movie on its terms, and we masked up and braved COVID-19 for a night at the multiplex. I was ready to look beyond the usual Emmerich-ism—the cheesy dialogue, the dumbed-down plotting, the paper-thin characterizations—and enjoy the ride. Alas, this ride wasn’t fun. Along with the dozen or so moviegoers in attendance, we mainly sat in silence, unamazed and untickled, wondering, “Is it over yet?” The filmmaking here is just plain amateurish, making the director’s earlier output seem cohesive and even competent by comparison. Moonfall is easily one of Emmerich’s worst movies to date, and that’s saying something.