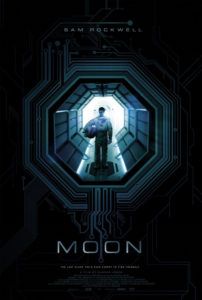 Science Fiction films like Moon come along every few years and remind fans of the genre why they follow it so closely. They make new admirers out of skeptics. Compiling several of the genre’s explored ideas and enlivening them by infusing compelling emotions, there’s more than simply conceptual tinkering going on here. There’s an intimate portrayal of loneliness and self-exploration set in the most isolated of environments, and an even greater message about how industry continues to dehumanize and commoditize the notion of humanity.

Sam Rockwell plays the only developed role in the film, or to clarify, roles. The sole operator manning a lunar station, Rockwell’s character Sam Bell has been fulfilling a three-year contract literally on the dark side of the moon. With two weeks left, he begins to feel edgy, talking to himself more and more. A crucial cog in the otherwise wholly mechanized production on the lunar surface, Sam oversees the operations and administers repairs for a mining action. Massive rovers comb the seemingly barren landscape for Helium-3 and concentrate it. Sam loads canisters and sends them to Earth; one container provides 70% of the planet’s power needs.

The artificial intelligence onboard the station, named Gerty (voiced by Kevin Spacey), meanders on a ceiling track, showing its mood through various expressive yellow smiley faces. Sam’s only friend, Gerty provides surprising warmth and protection. There’s plenty of food and entertainment; Sam exercises, plays ping pong, and whittles a replica of a small town. No open lines of communication exist, as his company hasn’t gotten around to fixing the downed satellite, so intermittent prerecorded communiqués from his wife and child become his only source of human contact. But what little interactions they provide don’t make up for his dwindling psyche.

After an accident occurs, Sam wakes up with Gerty watching over him. Upon retracing his steps, he finds what appears to be another Sam Bell. This other him speaks and interacts, and it seems to know almost everything about him that he does. Perhaps our hero has a split personality. Is this some unconscious manifestation derived from his time-cracked mind? Or is his perception of himself a projection of the person he sees before him? And why does Gerty avoid questions about there being two Sams? To explain and say more than the trailers have already shown would be doing you a disservice.

Familiar moonbase surroundings, complete with long white corridors, gray panels, and minimalist designs engulf Sam. The atmosphere contains a spare and sterile lack of color, the inorganic blueprints conceived for efficiency and not enjoyment. Spacey’s voicework as Gerty has a familiar computer dryness that never quite earns our trust. Unavoidably, there will be comparisons made to Stanley Kubrick’s 2001: A Space Odyssey and Andrei Tarkovsky’s Solaris. Fair enough. First-time director Duncan Jones could not possibly have conceived this story without taking some insight from those films, but his inspiration is simply that, and not transparent theft. Still, there have been countless motion pictures and novels made about isolation in space. Where better to show the slow stripping of a human mind than in the very real infinite blackness that surrounds us? Not only does the environment present cold and dark emptiness beyond compare, but it provides an undying metaphor for loneliness and seclusion both emotionally and physically.

Consequently, Rockwell gives a matchless performance that demonstrates anger, depression, humor, sadness, frustration, desperation, and even mild insanity. Being in almost every frame, he captures the audience completely; he has our sympathy while making us ponder what his character’s dilemma means. Underappreciated as a supporting actor and almost nonexistent as a leading man, Rockwell has been doling out great performances for years virtually unnoticed—see Confessions of a Dangerous Mind, The Green Mile, Heist, Matchstick Men, and Snow Angels. And while it’s too much to hope that Oscar voters will remember Rockwell in this low-budget sci-fi story come awards season, we can always dream.

Thinking films in this genre come along less frequently than they should, the most recent examples being Pixar’s WALL•E from last year and Danny Boyle’s Sunshine from 2007. In fact, only a handful have ever been made, whereas big-budget space operas, the ones from moneymaking franchises that have more special-effects than thought-provocations, come and go all too often. Moon possesses superb visuals, an absorbing narrative, and doesn’t numb the mind while providing entertainment. In a way, motion pictures like this are more thrilling than any Hollywood sci-fi actioner, because they engage our senses and our intellect. Science-fiction commonly touches one or the other, but how often does it connect with both?