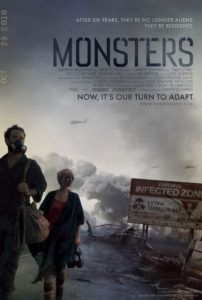 When a NASA space probe sent to find proof of alien life within our solar system returns, it breaks up in our planet’s atmosphere upon reentry, leaving debris marked by alien “infection” scattered through the northern part of Mexico and into the southwestern sections of the United States. The contaminated pieces of the probe manipulate local biology, resulting in humongous mutations that prove dangerous for nearby populations, namely humanity. Thousands have died. The U.S. military sends jet fighters to stop the creatures, which have grown to monstrous proportions, but they’ve ingrained themselves into the neighboring biosphere beyond control. Like something out of King Kong, the American government builds an immense wall at the border to keep the infection out. Some refuse to leave their homes within the Infected Zone, while others can’t wait to escape.

Writer-director Gareth Edwards’ Monsters was made for a mere $250,000, yet the above setup describes a film with blockbuster ambition, filled with expensive effects and big-name stars. But this independent production comes by way of Magnolia Pictures’ genre distributor Magnet Releasing, which picked up Edwards’ picture after its premiere at the South by South West Festival. A combination of the verité sci-fi setting of District 9 and the run-through-the-jungle survivalist scenario of Jurassic Park, the film is quainter than both. Shot on location in Guatemala, Mexico and Texas using guerilla filmmaking techniques, the real-life cultural backdrop takes precedence over the film’s tentacle-bound creatures, which play a periphery role and make only two or three brief appearances despite the title.

The story journeys through terrain wrought by “the creatures”, which are less monsters than aliens. But what the creatures are called is a minor detail. Photojournalist Andrew (Scoot McNairy) has been obliged to look after Samantha (Whitney Able), his boss’ daughter who was stranded on the other side of the Infected Zone. He’s selfishly dedicated to his job, willing take photos of a child slain by a creature for a $50k payday; she comes with emotional baggage from her looming marriage. They have two days to make it one-hundred miles to the coast before the entire Zone is quarantined within the high-reaching walls built by the American government. Troops are everywhere. Televisions buzz with footage from the most recent creature attack. And yet many of the locals have a sense of stoicism about their potential doom; their philosophy is to go-with-the-flow of Nature.

As for the creatures, they’re Lovecraftian things massive in size, resembling gigantic octopi with colossal insect legs and light-reactive bioluminescent tendrils. Andrew and Samantha catch only glimpses here and there, but Andrew remains dedicated to photographing one in-the-flesh. Their guides lead them by pickup truck to a rendezvous; from there a boat takes them downriver and for a moment the film feels like Herzog’s Aguirre, The Wrath of God, complete with the eerie image of a ramshackle vessel lodged in a tree. Of course, like most man-woman couples on a perilous trek across the unknown, the two begin to fall for each other along the way. Nothing else much happens beyond the journey itself, or at least it feels that way.

Edwards’ script has little substance, though it doesn’t need it. Dialogue is spare and characterizations are nominal. Yet the film has a quiet nobility. Ruminative shots of the gorgeous Mexican landscape are captured by Edwards, who also serves as cinematographer here and uses common video equipment. A number of unbelievably beautiful vistas come from the river scenes at sunset, or a later scene from atop a Mayan temple looking out at the CGI-rendered border fence. We see “Quarantine” signs and a painting by locals that depicts the creatures battling tanks. Signage warning of infection litters the backdrop. But the world feels less convincingly portrayed than the aforementioned District 9, whose every detail of mise-en-scène evoked a world complicated by aliens. Here, the creatures are incidental. Indeed, that’s the point.

Edwards has constructed a clever allegory for the current U.S. immigration policy, one to rival the recent Machete with contrasting subtlety to that film’s over-the-top gore. Whereas the American government wants to close its southern border to Mexico, Edwards views the integration of populations as a natural part of development through interaction and evolution. Meanwhile, many Americans view illegal “aliens” as creatures hopping the border and polluting the natural order of things (as if America was so pure-blooded). The message is a transcendentalist one that suggests Nature and all humanity are interconnected, and false ideas like walls and borders only inharmoniously separate them.

Unfortunately, the viewer spends much of the runtime waiting to see the creatures, and only in the final moments does the film provide a payoff. Monsters should have been called Journey Through the Land of Creatures, however more cumbersome such a title would be for its accuracy. Edwards has made a film about a landscape and he’s populated it with vague characters and rare sightings of extra-terrestrial beings, but much of the runtime it feels like nothing happens. If only we weren’t so interested in seeing the creatures, the social commentary might have more impact. And impressive though Edwards’ efforts on his negligible budget may be from a production resourcefulness standpoint, the result is regrettably unremarkable, even empty given the predictable character developments. Still, Edwards’ direction holds promise, and should major Hollywood studios be searching for fresh unknown talent to helm their next big project, Edwards should be their man.