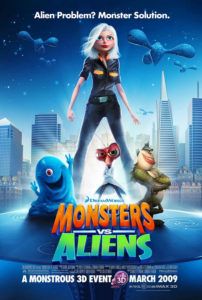 When evil octopi-alien Gallaxhar, bent on ruling planet Earth, announces to his horde of self-cloned aliens to obliterate the monster heroes fighting to stop him, he shouts, “Destroy them, aliens!” Since when did aliens start referring to themselves as aliens? Shouldn’t they be calling themselves Gallaxharians, or whatever? Klingons call themselves Klingons. Ewoks, well, they can’t speak English, but they probably call themselves Ewoks. They’re alien to us, not to themselves. But that’s the kind of nonsensical, brain-numbing logic you can expect from Dreamworks Animation’s Monsters vs. Aliens.

The title sums it up. Evil alien Gallaxhar (voice of Rainn Wilson) sends a building-size robot to our planet to gather remnants of a fallen meteor, and the government initiates its top-secret program of recruiting monsters to fight their uncanny battles (think Hellboy). Brawling with the four-eyed aliens are Ginormica (voice of Reese Witherspoon), who recently became The 50-Foot Woman when she was struck by the same glowing meteorite Gallaxhar wants. She’s joined by mad scientist Dr. Cockroach Ph.D. (voice of Hugh Laurie), fish-man The Missing Link (voice of Will Arnett), and the literally brainless living goo dubbed B.O.B. (voice of Seth Rogen). The monsters fight the aliens, there’s some rubbish about Ginormica’s love life with her snooty news anchor fiancé Derek (voice of Paul Rudd) in the middle, and there you have it.

Since the film comes from Dreamworks, the same studio behind the Shrek movies, expect more referential humor than you can stomach. Given the film’s subject, their field of play is wide, so the five credited writers allude to everything from Close Encounters of the Third Kind to An Inconvenient Truth. For the kids, there’s “in” lingo and Dance Dance Revolution. Even the voice casting of celebrities abound, particularly Stephen Colbert as the President, shows the film’s desperation for pop-culture approval. Comprised of random comedy and zero audience involvement, the plot exists simply to propel jokes, and most of them fall flat. The dated style of this studio’s projects gives us a better appreciation of Pixar’s timeless quality of storytelling, whereas most Dreamworks pictures become irrelevant and un-hip a few years after their release.

The animation style feels generic, having resorted to the basics of cartoon stylization—angular men with square-jaws, curvy women with heart-shaped heads. Where the film excels is the disaster scenes propelled by the alien’s giant robot and the monsters’ so-ugly-it’s-cute Insecosaurus, both ripped right out of Japanese monster-destroys-Tokyo movies like Godzilla. Gallaxhar’s robot looks like a metal candy Dot with one eye, and it topples buildings in downtown San Francisco with slow, eerie movements. Few other scenes dazzle, as the filmmakers were more concerned about bright cartoon violence than realism.

Presented in Tru3D, the experience is marred by the need to wear shoddy plastic glasses, as well as suffer forced scenes that underline the 3-D effect and divert from the story. Oddly, these 3-D movies always employ outdated toys just to thrust them in the viewer’s face: Journey to the Center of the Earth used marbles and a yo-yo, and now Monsters vs. Aliens innovates with a red paddleball bouncing at the screen. Is this why Dreamworks spent an extra $15 million to apply 3-D onto their production, for a paddleball? Do kids today know what a paddleball is? Even audiences catching a standard 2-D screening are forced to endure the device’s pitfalls, as watching these unnaturally-placed sequences in a mere two dimensions is nothing short of awkward.

The amount of throwaway material offered by Rob Letterman and Conrad Vernon, the directors behind Shark Tale and Shrek 2, is astounding. Computer animated movies take years to complete, so it’s ponderous that they justify putting so much time and money into such a forgettable film. Stakes are not set, lessons are not learned, and the entire procession is a string of bad, repetitive gags. Your children will be entertained because the production is colorful and silly, except their imaginations will not be engaged. Where animation should have limitless potential, particularly with a concept like the one in Monsters vs. Aliens, this film squanders its prospects on mundane storytelling, and further distracts from any purpose with the 3-D gimmick.