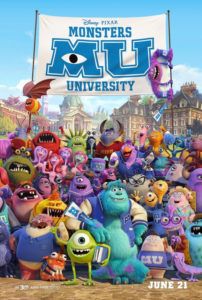 In sitting down for Pixar Animation’s Monsters University, one might ask themselves if the premier animation house has passed their prime, if their age of animated masterpieces is over. Certainly, no other studio could surpass Pixar in terms of animation quality, but have their stories waned? This prequel to 2001’s Monsters, Inc. follows what have been a number of rocky years after the underperforming Cars 2 and the underappreciated Brave. Distributors at Walt Disney Pictures, long derided for their reliance on direct-to-video sequels to create a moneymaking franchise out of every new cartoon, have demonstrated their influence over Pixar’s otherwise progressive strategy. Instead of outstandingly original and unpredictable material like Ratatouille, WALL·E, or Up, Pixar has relied on familiar content as of late to ensure a safer place in the market and, in an ironic turn, they’ve suffered for it. Monsters University continues that narrative trend, but does so in such a lovingly detailed and endearing way that one can hardly fault the studio for returning us to these characters and their unique world.

After a brief prologue that defines green cyclops Mike Wazowski as a childhood outcast, the film quickly forays into a college campus romp borrowing more than a few strains from the likes of Animal House (1978) and Revenge of the Nerds (1984), including Randy Newman’s drumline-infused score. Voiced by Billy Crystal, Mike steps onto the campus of MU, bags in his arms, retainer is his mouth, ready to become the world’s greatest “Scarer”. His new roommate is Randy Boggs (voice of Steve Buscemi), that disappearing-reappearing chameleon and Mike’s future nemesis, but for now they’re both determined to be best buds and future Scarers. In scare class, the outgoing but bookish Mike finds his advanced knowledge of scare methodology means little next to presence. “If you’re not scary,” says winged anthropod Dean Hardscrabble (voice of Helen Mirren), “what kind of a monster are you?” Enter John Goodman’s Mike Sullivan, a tall and hairy scare-bear who meanders into the lecture late with nary a pencil or paper, but can frighten the pants off just about anything. Not yet familiar enough to call him “Sulley”, the alumnus family name Sullivan is known throughout campus, earning him attention from the foremost frat house ROR, Roar Omega Roar.

Thus Monsters University embraces several recognizable genres, from coming-of-age tale to Snobs vs. Slobs yarn. When both brainy Mike and sporty Sullivan are booted from scare class for trying to show up one another in front of the Dean, the mismatched pair are relegated to the band of rejected, unscary monsters of Oozma Kappa (OK)—a fraternity consisting of two-headed magicians Terri (Sean Hayes) and Terry (Dave Foley), a suction armed “continuing education” student Don Carlton (Joel Murray, playing one of Bill Swerski’s Superfans), and the hippie extreme Art (Charlie Day). They’re all bunking in the house of Mrs. Squibbles (Julia Sweeny), mother of OK’s resident five-eyed glob Squishy (Peter Sohn). To redeem themselves, the ever-bickering Mike and Sullivan enlist the OK house in the campus’ annual Scare Games, a series of competitions where this group of underdogs must train to defeat the elitist jocks of ROR, headed by mythic beast-thing Johnny (voice of Nathan Fillion). If they lose the series of games— obstacle courses, hide-and-seek, and finally a scare-off—our heroes will be resigned to a lesser career of managing scream canisters.

Of course, the Scare Games competition plays out in conventional fashion. The winner will not surprise you, but the event’s intentionally underwhelming climax might. Even when embracing formula material, Pixar manages to add unexpected layers to their storytelling. To call the material predictable misses the point. Director Dan Scanlon, his team of co-writers, and Pixar’s small mass of animators have embraced the cliché college movie genre to once again explore the oddity and charm of the world and characters they established in 2001. Foremost are Mike and Sulley, two friends who at first despise each other but through the course of the film become best friends. Mike’s serious minded and by-the-book approach to scaring is aggravated by what comes naturally to the smart-alecky jock Sulley. Crystal and Goodman are once again a perfect odd couple. Animation aside, Pixar does such an extraordinary job developing these characters that they feel three-dimensional in ways most live-action films cannot hope to grasp (and without need for insufferable 3D glasses).

Keeping in line with its predecessor, every scene contains a combination of sight gags, interesting characters, and eye-popping visuals. The daytime campus scenes are cartoony and bright, the colorful plethora of monster characters populating every frame is varied. You’d have to watch the film two, three times to fully absorb the crowds of ghouls and goblins in all their detail, not to mention the visual winks and nods found in the backdrop environments. But Pixar can switch from cartoony to scary in an instant. Take the sorority populated by three-eyed college bimbos who can turn those ditzy expressions into creepy vamp-fangs and glowing red eyes. In later scenes, Mike and Sulley walk through a test scare door into the human world, and the realistic nighttime surroundings look staggeringly atmospheric and genuine. And, of course, more than once I found myself lost in admiring the detail in Pixar’s animation of Sulley’s fur or the textures on their OK sweaters. (On a similar note, Monsters University is preceded by a Pixar short, The Blue Umbrella, directed Saschka Unseld. The short delivers a jaw-dropping display of photo-real animation of a rainy cityscape. For much of the short, I had an inner debate about whether or not Unseld used just animation or animation to augment actual live-action footage, but after some checking, I found out it’s all animation. The short, and its use of the “global illumination” technique, were nothing short of brilliant.)

Although G-rated and aimed at families, in all likelihood adults will find more to savor in Monsters University than children. Those versed in the college experience will have many a laugh at Pixar’s observation of campus life. But children can hardly get these references or the formulaic plotlines of such college comedies as mentioned in this review (at least, I hope the very young aren’t being exposed to such films). However, youngsters will welcome Pixar’s warm and multi-hued design palette, seeing Mike and Sulley back on the screen, and some of the general comedic touches in the story. But this is a film today’s youth will return to years down the road as they grow up and head out for their first college experience, and they’ll appreciate it even more. In the same way that Pixar followed youth to maturity from the childlike innocence of Toy Story to the send-off in Toy Story 3, as the young audience of Monsters University grows, so will the ways in which they learn to value this film. Although not wholly original or as monumental as some of Pixar’s other work, it’s a film that embraces the studio’s drive for timeless, universally appealing animation.