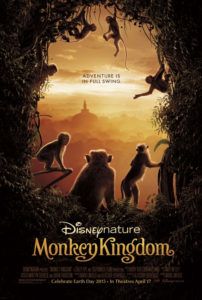 Aside from opening with an obvious soundtrack choice (the theme from the 1960s TV series “The Monkees”), Disneynature’s eighth documentary Monkey Kingdom is a rather delightful, fascinating exploration of an animal social hierarchy. Each one of the docs released by the Paris-based environmentalist division of Walt Disney Studios has become more and more cutesy, but this one benefits from a convincing natural drama at its center, as well as the expressive faces and behaviors courtesy of its simian castmembers. Of course, it helps that the macaque monkeys themselves are playful, very human-like, and just adorable. And it doesn’t hurt that narrator Tina Fey, despite occasional eye-rolling comic commentary, brings lively descriptions to the subject matter.

Mark Linfield and Alastair Fothergill have been hit-or-miss with their series of nature documentaries under their independent Disneynature label. They started strong with Earth (2009) Oceans (2010), and African Cats (2011), and then devolved into the shamefully narrated, blatant anthropomorphisms in Chimpanzee (2012) and Bears (2014). Nevertheless, Disneynature’s habit of oversimplifying Nature and playing to child-friendly audiences has resulted in millions of charitable dollars. During the opening week of each doc, a portion of the box office has gone toward its respective cause. Monkey Kingdom will help supply a hearty donation to Conservation International in support of macaque monkeys and wildlife in and around the film’s locations in Sri Lanka.

An expert camera crew captures footage of a macaque monkey tribe living among ancient ruins in the jungles of Polonnaruwa. At the center of the “story” is Maya, a lowborn female monkey who lives at the bottom of a strict social ladder. Up in the treetops, the highborn rule and feast aplenty. Maya is subject to the rule of her alpha male Raja, and a three-pronged threat of red-faced females called The Sisters. Given her social status, Maya is resigned to foraging for scraps of food and serving as a living jungle gym for the Sisters’ children. Never allowed where the ripest fruit grows or best shelter is found, Maya is seemingly fated to live a hard and unforgiving life. Then a strong suitor named Kumar, who arrives from deep in the jungle, provides Maya not only with a child named Kip, but also the chance to earn the highborns’ respect. When a rival group forces the macaques out of their home and into a nearby city, Maya and Kumar demonstrate their ingenuity and eventually lead their group back to reclaim their home.

Monkey Kingdom takes a narrative and visual detour when the macaques journey into human territory; they invade a child’s birthday party, raid a busy food market, and make a temporary dwelling out of the frame of a cell phone tower. Some of these moments feel staged, given the convenience of the camera’s placement. Elsewhere, beautifully filmed scenes seem like the filmmakers captured lightning in a bottle. Take the sequence when a flock of flying termites migrates in the low Sun, and the macaques leap and grab at them, feasting to their heart’s content. (I think I could watch overjoyed macaques eating termites for hours.) Other animals in the vicinity (elephants, peacocks, a leopard, a mongoose, and a monitor lizard) prove to be fascinating supporting characters.

Fey’s narration gets goofy at times, but her voice talents never resort to the kitsch delivered by John C. Reilly or Tim Allen in previous Disneynature docs. Granted, one could argue that Monkey Kingdom suffers from the same structured narrative and contemptible cutesiness of previous entries, but the emotion evident on the monkeys’ faces throughout is utterly convincing. Families, especially children, will enjoy the relatable personality displayed by the macaques, regardless of the degree to which it’s been enhanced by the filmmakers. Devotees of more objective Nature documentaries will suffer through a questionable soundtrack and a few moments of overemphasized slapstick, but the world represented here is undeniably stunning on a visual level, and certainly dramatic on its own terms.