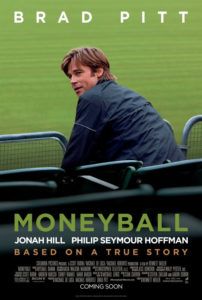 Moneyball is a dramatized adaptation of Michael Lewis’ best-selling nonfiction book about Oakland A’s General Manager Billy Beane during the 2002 baseball season. In an unconventional move, Beane used the sabermetric logarithms of baseball theoretician Bill James to assemble a team based on winning statistics over the traditional logic and surface-obsessed instincts of player scouts. Originally meant for a docudrama approach by Steven Soderbergh, who left the project due to “creative differences” and instead directed Contagion, this straightforward narrative emerged from several production delays under helmer Bennett Miller. But rather than a compelling, alternative sports movie more about numbers than plays on the field (which it is), this is a vehicle for Brad Pitt to put his charismatic star power to good use.

Pitt plays Beane, once a promising young ball player who failed to follow through when he went professional. Occasional flashbacks of Beane’s failure to live up to his potential are spliced into the emerging story as the Beane of 2002, now a GM, rethinks his recruiting strategy. Scouts, after all, have no idea what a young player will be like on the field. Beane is reminded of this by his new Assistant GM, Peter Brand (Jonah Hill, playing a fictionalized Paul DePodesta, who asked for his name to be changed), a number cruncher who suggests that, after the A’s top three celeb players move to other teams for more money, Beane should be using his meager budget to buy wins, not expensive free agent players. The philosophy is to consider who, according to the statistics, gets on base the most whether by walking or at bat. Put together a team of players with strong numbers and higher percentages than the star players, and in theory, you have a winner from mathematical probability standpoint.

Brand puts together a list of talent for a team akin to “the island of misfit toys” and Beane finagles with rival GMs in entertaining phone pitches to secure them. Once he gathers Brand’s ideal team, Beane faces criticism from not only his cadre of veteran scouts, but the team’s manager, Art Howe (Philip Seymour Hoffman), who refuses to play the team in the unusual manner in which Brand and Beane suggest. And despite holes in James’ hypotheses, which the film glosses over, it becomes a tale of a radical idea being opposed by traditionalists in power. It’s supposed that, as a frontrunner, Beane made way for the Boston Red Sox’s general manager (a high salary position Beane turned down out of devotion to the A’s) to adopt the same strategy and win The World Series two years later. But because of stubborn-minded purists, Beane, who did not win the championship, was forgotten because of his team’s loss.

Padding a basic story to an unnecessary more-than-two-hour runtime, the screenplay includes a subplot about Beane’s ex-wife (Robin Wright) and preteen daughter (Kerris Dorsey) and places these scenes throughout to awkward effect. It’s a transparent attempt to make this a character piece about Beane, when the most fascinating aspect remains the numbers, no matter how much gravitas Pitt conveys. Miller incorporates scenes where Beane drives angry at night or works out his stress in the gym, but the character’s brooding is superficial at best, shown with several scenes of Pitt, eyebrows upturned, covering his mouth with his hand or sighing before he answers a dreaded phone call. Pitt’s magnitude as an actor had a stronger presence in this year’s The Tree of Life, where he played a father so desperate to be a good parent that he ended up a cruel authoritarian—that performance is where this buzz-based Oscar talk for Pitt’s performance in Moneyball should be directed. As for Hill, it’s nice to see him playing a character whose sole purpose isn’t to get drunk and laid. And Hoffman doesn’t have nearly enough to do.

Filled with solid performances and plenty of technical jargon, much about this film recalls The Social Network. Too much, in fact. A large portion of the audience that didn’t “get” that film and its newfangled subject matter will find themselves gravitating towards this easier to swallow sports-centric story, resulting in a similar experience. Capote director Miller doesn’t demonstrate the visual sophistication of David Fincher here, but the screenplay by Steven Zaillian and The Social Network scribe Aaron Sorkin has more than enough in common. Both films reduce heavy technical ideas into layman’s terms and involve scenes of lightly comic brainstorming dialogue, but where Fincher’s film created cinematic panache through an artistic presentation, Miller’s understated point-and-shoot policy doesn’t make a lasting impression. Even Mychael Danna’s low-key score of tones over melody bears a strong aural resemblance to Trent Reznor and Atticus Ross’ Oscar-winning music.

Nevertheless, it’s a good story that deepens our understanding of what’s required to manufacture a winning sports team, either by playing people or playing the numbers. Analysts would argue that for the best application of James’ ideas, one requires a profound understanding of both elements. The film has a point to prove, and so, for the most part, it overlooks the human element and regards Beane’s ostensible failure as an uncelebrated victory for sports management. The poignant finale may not be conducive to the sports genre and may dismay mainstream crowds, but it draws the rest of us in and elevates the material. As a result, walking away from Moneyball, even if you don’t care much for baseball or sports in general, traces of a very human underdog drama come through to render the experience a universally consumable one.