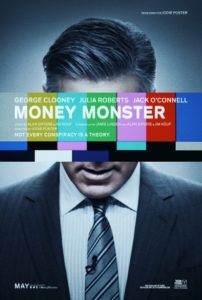 Money Monster hopes to connect with the 99%’s rage over stock market manipulation with a tense scenario that, by the end, reminds us the financial system is rigged, corporations run everything, and there’s not much we can do about it. And yet, the film is effortlessly light and instantly forgettable—a shocker given the subject matter. The pleasant, danger-lite proceedings ask us to get mad about such financial injustices, even while admitting that a huge victory against a single corporation won’t change the overall system. Indeed, Money Monster somehow manages to be entertaining and mildly satisfying, despite not offering much real commentary or catharsis. It doesn’t contain a thorough explanation of the financial crimes at its center, either; but it does offer just over 90 minutes of diverting screentime with several talented actors and some sharp direction.

Think last year’s The Big Short by way of Dog Day Afternoon (1975) or Inside Man (2006), and you have some idea of what director Jodie Foster hopes to achieve. From a crowded screenplay by Jamie Linden, Alan DiFiore, and Jim Kouf, Foster works alongside her editor Matt Chesse to construct a fast-moving, spry diversion, with just the slightest hint of purpose. There’s a lot crammed inside the brief runtime, and there’s even a subplot or two that could have been trimmed (I’m thinking of you, subplot about erectile dysfunction cream). But the few central plot strains—part hostage crisis, part Wall Street indictment, and part corporate conspiracy—remain captivating and mass-audience friendly.

Playing an obvious send-up of CNBC’s Jim Cramer on Mad Money, George Clooney is Lee Gates, the gimmicky host of the stock-tip program “Money Monster”—complete with backup dancers and wacky sound bites. Juggling the usual pre-show behind-the-scene hullaballoo, Gates and his long-suffering director Patty Fenn (Julia Roberts) are set to record the latest live episode, discussing a reported “glitch” in the trading algorithm of a company called Ibis Clear Capital. Ibis’ CEO, Walt Camby (Dominic West), was supposed to appear on the show to explain how an unknown “glitch” caused their recent $800 million in market losses, which resulted in its stockholders losing their fortunes. Instead, Ibis has sent what Lee calls their “PR girl”—corporate communications officer Diane Lester (Caitriona Balfe)—who seems determined to stick to pre-written talking points. No matter. It’s all a part of the fast-moving stock market game. $800 million lost is yesterday’s news.

Just a minute or two into recording the show, Gates is interrupted on-set by Kyle Budwell (Jack O’Connell), a blue-collar New Yorker who appears with a gun, a vest-bomb for Lee, and a dead-man’s-trigger. Holding everyone in the studio hostage, Kyle demands answers. He lost his late mother’s entire savings by investing in Ibis, a stock Lee openly endorsed and even ensured his audience was “safer than a savings account”. However, Kyle doesn’t want his money back. He wants a real explanation as to how a “glitch” in a trading algorithm could result in so much money lost. Lee tries to find Kyle answers, while also negotiating his own hostage situation on live television, all with Patty keeping a calm voice in his ear from inside the control room. Meanwhile, the screenplay offers a few humorous asides for much-needed comic relief (mostly based around typical New Yorker-isms, such as the cameraman who says “Balls”). Kyle’s live beratement by his pregnant girlfriend (Emily Meade) is an effective twist, too.

Money Monster’s first half, set largely in the claustrophobic television studio, cross-cuts scenes of the police outside, led by a straight-arrow captain (Giancarlo Esposito), scrambling to figure out how to safely extract the hostages. Inside, the trio of Clooney, Roberts, and O’Connell create an edgy interplay, with emotion and danger propelling the rise and fall of tension. During the second half, the film begins to test our suspension of disbelief with how quickly Lee and Patty begin to take Kyle’s side, as it gradually becomes clear Ibis’ CEO was up to no good. And then there’s Lee and Kyle’s jumpy and outlandish walk down several New York city blocks to confront Camby in an underwhelming finale. Things work out pretty much as you’d expect, albeit lighter and less satisfying. Clooney and Roberts use their star power to compensate their underwritten characters, while O’Connell’s sweaty anger is appropriately melodramatic.

Foster’s direction is solid and the production sharply lensed by Matthew Libatique (Iron Man, Chi-Raq), although the sleek look is blandly accompanied by Dominic Lewis’ by-the-book thriller score. Money Monster’s rather toothless and nonspecific attack on Wall Street is capped by a last-scene afterthought of televised news broadcasts commenting on how Wall Street has your money. Foster also shows us several shots of apathy amid the viewing public (one rec-room goes back to playing foosball once the hostage situation is over). Perhaps Foster’s film wants only for you to ask more questions about how you’re investing, and who controls the markets. It certainly doesn’t suggest you resolve your rage over the rigged stock market with a gun and bomb, and even if you did, Money Monster doesn’t imply that the criminals involved in financial crimes will receive their due comeuppance. For a hostage thriller that wants its audience to ponder Wall Street’s crimes, Money Monster‘s message feels muddled, and the film remains far too dismissible after it’s over.