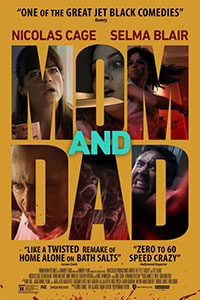 Underappreciated parents will savor the premise of Mom and Dad, though they may not want to admit it. A strange signal on radios and other electronic devices has reversed the protection instinct of parents everywhere. Instead of wanting to safeguard their offspring, parents begin attacking and in many cases murdering their children—and only their children. The effect of the signal is limited to when parents sense their children nearby, launching them into an insatiable rage. The setup reminded me of Stephen King’s Cell mixed with a hearty dose of suburban satire. Even better, the movie stars Nicolas Cage at his most unhinged, alongside Selma Blair. The prospect of a Cage-killer alone is worth the price of admission. And yet, no matter how promising this R.L. Stine-worthy scenario and its cult casting sound, Mom and Dad remains a twisted horror-comedy without much beyond its back-of-the-box description.

The movie was written and directed by Brian Taylor, one half of the Neveldine/Taylor duo responsible for a number of titles—each with a better premise than an execution. Consider Crank (2006) and its sequel Crank: High Voltage (2009). Both star Jason Statham as a man poisoned by criminals. His heart is slowing, and he will soon die. To stay alive, he must keep his adrenaline levels up (with electroshocks, drugs, public sex, and other intense activities), while also trying to get revenge on his poisoner. It’s a great idea resulting in two slapdash, borderline nonsensical films. Or consider Gamer (2009), about the future of video games, where prison inmates volunteer themselves to be controlled by a twerpy teen as the living game character in a real-world first-person shooter. If the gamer leads their prisoner-avatar through enough victories, the prisoner wins their freedom. But once again, the relentlessness of the Neveldine/Taylor approach aims low at a target audience of teenage boys. (Neveldine/Taylor also spoiled a perfectly good DC Comics franchise with their embarrassing script for Jonah Hex, 2010).

Mom and Dad opens with a 1970s-inflected title sequence, though the reasons for this stylistic flourish remain a mystery, as do most of Taylor’s formal choices. An early proponent of digital camerawork, Taylor still maintains that early 2000s attitude of shooting a lot, shooting fast, and patching the film together in post-production. The finished product ends up having a lot of cocked angles, fisheye lensing, gonzo energy, and zero shot-for-shot logic—it’s impossible to describe the director’s technique without using the adjective “extreme”. To be sure, there’s a feeling that Taylor began every morning of the shoot with about ten Red Bulls, and then leaped headlong into his day with a see-what-sticks approach. For a while, the viewer may even dismiss the stylistic overreaching because the material proves so shocking. In the first sequence, a mother abandons her baby in an SUV on the train tracks, where it’s quickly demolished by an oncoming locomotive. With this, Taylor seems to prepare audiences for the worst; but frankly, the opener is about as bad as it gets.

Enter the Ryans, a nuclear family settled in a cookie-cutter neighborhood. Brent and Kendall (Cage and Blair) have two children: Their 9-year-old Josh (Zackary Arthur) curiously remains home from school in his pajamas all day, without explanation. Their teenage daughter Carly (Anne Winters) is an acidic millennial addicted to social media and prone to berating her mother. The family’s tensions are evident over an awkward breakfast, where Kendall mothers everyone, including Brent, and the paterfamilias feels his already reckless masculinity stifled by his wife and children. All signs point to Brent being a lunatic before he’s affected by the mysterious signal. Whereas Kendall is passive-aggressive and resentful of her children, Brent is just-plain-aggressive. The children aren’t any better. Josh is a gun-wielding psycho with an affinity for dead animals, and Carly’s mean girl status is contemptible. When the signal takes hold, unleashing Brent and Kendall on their children, the viewer cannot help but hope everyone kills each other. Sadly, they don’t.

Mom and Dad is more of a dark comedy than a horror film, which is to say, Taylor hopes to break boundaries of taste, but doesn’t. Clocking-in at 83 minutes, the terrorizing barely achieves momentum before the movie concludes in an abrupt, unsatisfactory non-ending. Cage’s performance provides a few ideal YouTube clips, including his explanation of why his reciprocating saw is called a Sawzall, “Because it saws… all” (recalling his recitation of “Face… off“). Blair, the child actors, and a late appearance by Lance Henriksen are each underutilized. Occasionally, Taylor captures an unsettling image, like bloodthirsty parents chasing down their children after school, or a mother who gives birth and tries to strangle her newborn. But these moments are few and seem disconnected from the forward thrust of the story. Ultimately, as I’ve written elsewhere, Taylor’s choppy, to the extreme approach would be better applied to energy drink commercials.