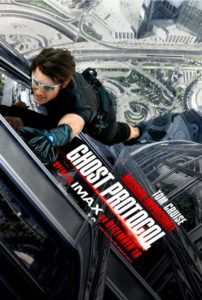 Any argument that the 16-year-old Mission: Impossible franchise has worn out its welcome or grown creatively fatigued finds powerful opposition in Mission: Impossible – Ghost Protocol, the third sequel to 1996’s original by Brian De Palma. This rejuvenating turn places Pixar maestro Brad Bird (The Iron Giant, The Incredibles, and Ratatouille)—who was hand-picked by star Tom Cruise and his fellow producers—at the helm of a major live-action production, his first. Being accustomed to the limitlessness of animation driving his pictures, Bird’s approach brings an appropriate sense of the impossible to the proceedings. His treatment is fast-paced, shot in compelling locales, ornamented with fascinating spy gizmos (that sometimes don’t work the way they’re supposed to), and filled with sensational, daring sequences, all inside a scenario that stays true to its genre’s source and cleverly plays on Cold War paranoia. Likewise, Cruise himself barely shows signs of aging or evidence of even slowing down anytime soon, and reinvents himself once again as an action hero, likable and even occasionally funny. Under Bird’s command, Cruise and company deliver another well-rounded franchise addition, easily the best entry since De Palma’s.

As unlikely a choice as Bird may have been, his transition from animation to live-action appears to have been effortless. Animation has given the director an eye for detail within the frame, for absolute control, and he exacts that control on a number of carefully considered sequences that make expert use of silence to enhance our involvement. Take the opening, which finds Cruise’ Ethan Hunt locked in a Russian prison cell, bouncing a ball against a wall in homage to Steve McQueen in The Great Escape. Outside, techie Benji Dunn (Simon Pegg) orchestrates Hunt’s bravado escape by remotely unlocking security doors.  But Bird doesn’t resist pyrotechnics either. Once Hunt has been freed, his team infiltrates the Kremlin to recover a file sought by Russian nuclear radical Kurt Hendricks (Michael Nyqvist), but he inadvertently becomes a patsy when Hendricks detonates a bomb and the Kremlin explodes in a jaw-dropping display of CGI. Later still, Bird hangs Cruise outside Dubai’s Burj Khalifa tower; knowing that Cruise, per usual, executed his own stunts makes the feat even more heart-stopping. Bird may not have an unmistakable personal style evident from scene to scene, but he maintains expert authority over complicated sequences and shifting moods with a craftsman’s touch. It’s as though he’d directed live-action films his entire career. 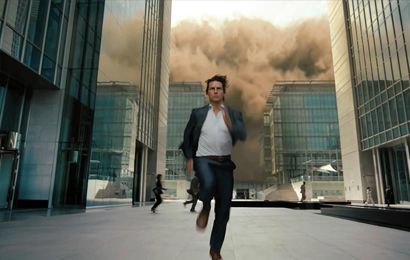 Better still, Bird pays close attention to character development—something this series has often received criticism for its lack thereof. For the first time in three sequels, the writers (Josh Appelbaum and André Nemec) have retained some connectivity from this film to its immediate predecessor, so it feels like the same version of our hero has carried over from J.J. Abrams’ M:I-III. Fleeting but later crucial references to Hunt’s wife Julia (Michelle Monaghan), as well as returning influence from executive producer Abrams and composer Michael Giacchino’s score, bring a sense of familiarity absent from the earlier films. As a result, easing into the story and characters becomes effortless, as we’re not attempting to re-learn who they are, as John Woo made us do in M:I-II, and then Abrams made us do yet again in his film. For the first time, a Mission: Impossible sequel actually feels like a sequel, instead of fresh start, in the best way. Incidentally, the plot involves Hunt and his crew, including the returning Benji, and new blood agents Jane (Paula Patton, incredibly tough and sexy) and analyst Brandt (Jeremy Renner), seeking out Hendricks, who schemes to incite nuclear war to purify the planet in a cleansing fire.

Unlike Cruise’s sidekick characters from previous tours, this time each member of Hunt’s team has motivations to make them more than just one-note spies. While elusive and austere characterizations presented a certain mystique in Mission: Impossible, Bird wistfully establishes spy veneers and yet allows them to reveal deeper characters underneath. Hunt’s presence in the Moscow prison in the first scene has occurred because he went rogue after a tragedy in his family. Jane wants revenge on a French assassin who killed her fellow agent and lover (Josh Holloway). Brandt says he’s an analyst, but his true identity reveals that he and Hunt share a past. And as for Benji, this is his first field operation; watching him try to impress the unconvinced Hunt while struggling with the film’s oft-malfunctioning gadgets becomes a welcomed comic relief in this otherwise serious yarn about impending nuclear doom.

Not that Bird allows us to dwell much on the plot’s high-stakes game; we’re always aware of what’s in jeopardy, but the speed at which the story unfolds keeps the audience tied to their seats from one sequence to the next. His production leaps from Moscow to Mumbai to Dubai, each locale boasting a more impressive gadget or action setup than the last. In the Kremlin, another almost silent sequence has Hunt and Benji deceiving an armed guard with a neat hallway projection device; in Dubai, Hunt chases Hendricks through a modern parking garage featuring robotic lifts that ascend and descend for sudden getaways or unexpected attacks (the sequence recalls a similar, but better one in Minority Report that occurs in a futuristic Audi factory). Of course, the aforementioned stunt where Cruise hangs off the highest building in the world remains the film’s standout; what’s even more impressive is that it’s followed by a smart and equally thrilling caper sequence where Hunt and his team pull the “old switcheroo” on two groups of nuclear terrorists. All of this comes beautifully enhanced by Bird’s use of IMAX cameras, which provides an immersive, high-clarity experience without the need for darkening 3-D glasses. If cinema needs a new gimmick to sell their blockbusters, it should be this. 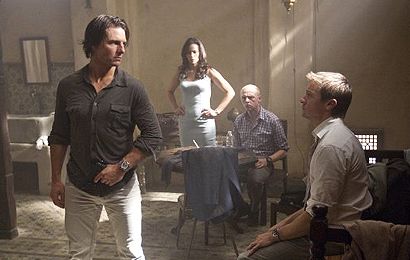 Back when Ghost Protocol was first announced, Renner had just received his Oscar nomination for The Hurt Locker and talk suggested Cruise would pass down the proverbial torch to retire from the series with this last outing. Thankfully, that doesn’t occur here, despite a CGI-rendered magnet-suspended drop for Brandt meant to evoke Hunt’s CIA safe room break-in and midair suspension from the original (though an interesting sequence for Renner, it still doesn’t top Cruise’s original). Rather, the film reinforces the notion that Cruise, Renner, Pegg, and Patton will return for another mission together, hopefully in the near future. A good thing too, as Renner, although an intense actor to be sure, doesn’t have Cruise’s natural, effortless onscreen energy and charisma that made him an international star and franchise runner. Renner’s Brandt makes a serviceable sidekick, but, perhaps because Cruise’s Hunt has been with us since the beginning, it just wouldn’t feel like Mission: Impossible without him. And with talk of Bird returning for a second impossible mission, it would be a pleasure if the next sequel kept this cast intact.

Aside from a disappointing moment where the film leads us to believe we’re about to see Vanessa Redgrave reprise her role as the arms dealer Max from De Palma’s film, but instead we get a chubby Russian, Bird’s effort is a triumph of actionized spy filmmaking, and one of the most satisfying blockbusters in recent memory. In fact, Bird’s film contains several referential notes to both De Palma and Abrams’ films that it remains a perfect amalgamation of both. Ghost Protocol not only revives a franchise that has been dormant for five years, but it marks a return to form for Cruise, who, with functional efforts like Knight and Day and Valkyrie in recent years, hasn’t had a hit this rewarding since his back-to-back collaborations with Steven Spielberg (Minority Report, War of the Worlds). Though he’s had a rough few years at the box-office and in the public eye, after this film, Cruise is bound to become an audience favorite once again. Those who were unconvinced or underwhelmed by Cruise’s recent work, or previous Mission: Impossible outings, have reason to rejoice: Brad Bird has made an excellent and fun film that possesses wowing spectacles, but doesn’t shirk on concepts like strong characters or elegant suspense.