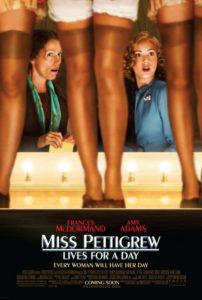 Miss Pettigrew Lives for a Day achieves the kind of pure cinematic bliss not matched since idols like Cary Grant, Katherine Hepburn, and Carole Lombard dominated the silver screen so many years ago. A blithe comedy of errors, the film crescendos with dramatic irony and fast-talking, quick-witted situations, calling to mind classics that I might normally say couldn’t be imitated in today’s industry. And yet, here is a film without a satirical or parodying edge, rather a devoted sense of fidelity to the narrative tropes of yesteryear.

The film opens in Depression-era London sometime during the late 1930s; war is brewing and destitution is visible on every street. Francis McDormand stars as the title’s Miss Pettigrew, a no-nonsense but poverty-ridden governess who finds herself fired from yet another position. Troubles at the employment office find her knocking on the door of a nightclub singer and would-be actress Delysia Lafosse (Amy Adams). Wrapped up in a love quadrilateral, the impetuous Delysia immediately wrangles Pettigrew as her “social secretary,” requiring assistance in managing her trio of lovers, each from whom she receives a specific benefit.

Success-hungry and over-sexed, Delysia barely knows what to do with her men. When we meet Phil (Tom Payne), her potential producer for the hottest new stage show in London, he’s naked in bed. Pettigrew barely shoos him away in time before slimy nightclub owner Nick (Mark Strong, from Stardust) comes home. Getting Nick’s hands off Delysia is another matter altogether, but Pettigrew’s clever improvisations, which surprise both her employer and indeed herself, do the job. Finally, there’s Michael (Lee Pace), Delysia’s lovesick piano player who Pettigrew believes may not be Delysia’s most advantageous lover, but he’s certainly the truest.

Saved from her decrepit rags, Pettigrew’s capricious employer dons her with a makeover, beautifying her laughably “as nature intended.” Not that it would matter to undergarment designer and all-around gentleman Joe (Ciarán Hinds, from There Will Be Blood), whose eye Pettigrew catches even in her less dolled-up state. By the end, despite their opposite stations, both Delysia and Pettigrew discover they’re much the same, realizing social position remains pale in comparison to potential true love. Sophisticated in its simplicity, this film is one of 2008’s best.

Amy Adams offers another fairy tale performance, complete with her wide-eyed dedication to childlike energy. Basking in Cinderella-type magic, she doesn’t repeat her starring role in Disney’s Enchanted, but she masters the art of lavish, electric, incontestable charm. After breaking into Hollywood with her bit role in Catch Me If You Can, she moved on slowly, eventually earning an Oscar nod for Best Supporting Actress in the little-seen Junebug. She’s come a long way since then, always performing in roles with incredible, sometimes exhausting kinetic energy. Her roles are always exaggerated in that theatrical way, making her tone ideal for classic Hollywood expressionism.

More astonishing, however, is McDormand, who combines pronounced lucidity with more subtly somber and cheerful moments. We’ve seen the full gamut of her range in the Coen Brothers’ films alone (she is, after all, married to Joel): in everything from her quaint Academy Award-winning role in Fargo, to her strong heroine in their brilliant debut Blood Simple, even to the Coens’ next feature, Burn After Reading, due in late 2008. One of our greatest pleasures is watching her Miss Pettigrew longingly chase after food (she has not eaten in days); we see McDormand bear tired, desperate, sincere eyes, aching for anything—plentiful buffet spread, a half-eaten apple, even soup kitchen gruel.

Based on the 1938 novel by Winifred Watson, writers David Magee and Simon Beaufoy’s script flows without an instant’s loss of momentum. Every line of dialogue holds pitch-perfect frequency, and yet, exists without feeling cheeky or forced. The film recalls something Ernst Lubitsch (Trouble in Paradise) would have done during the Depression years, by daring to equalize upper and lower classes into the same lovelorn group, complete with matching troubles, thus making both class designations meaningless. Like Lubitsch, the film importantly indulges rags-to-riches catharsis before reaching that parallel balance.

With nothing much to speak of in his filmography thus far, director Bharat Nalluri has done what many have tried in recent years, but most have failed at miserably: successfully recreate a screwball comedy on par with Lubitsch, Howard Hawks, or Preston Sturges. Complete with 1930s Art Deco interiors and full-on period detail, thanks to the flawless production design of Sarah Greenwood (Atonement), Nalluri’s film contains urbane comic and romantic airs, recalling the best of the genre (there’s even mention of Four’s a Crowd, Errol Flynn’s only dabble into screwball comedy, and a delightful entry in the genre to boot). Instead of reverberating like a faux modern Hollywood reproduction, we’re transported to the ever-appealing era, immersed in its fantasy romance, and yet confronted with imminent war and sometimes dearth conditions.

Nowadays happy endings and pleasant romances rarely find their way to the screen. Perhaps today’s audiences (or, at least, today’s filmmakers) are too cynical for joys so quaint. But Miss Pettigrew Lives for a Day reminds us why Golden Age cinema works, why those perfect endings were perfect, and why sometimes knowing with whom everyone will end up delights rather than feels predictable.