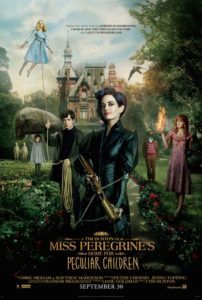 Tim Burton hasn’t tapped into the zeitgeist since the 1990s. His films over the last two decades have been increasingly uneven works of dominant CGI, an overreliance on production design, and characters that audiences care nothing about. Even the director’s few standouts during this period (Frankenweenie, Sweeny Todd) prove unmemorable in time. Burton’s heyday—Beetlejuice (1988), Ed Wood (1994), and perhaps his two Batman films—has passed, while his other pictures have simply faded from memory. A year from now, no one will remember Miss Peregrine’s Home for Peculiar Children either. The all-too-familiar story comes from author Ransom Riggs, whose young adult novel from 2011 shares enough in common with X-Men that Twentieth Century Fox couldn’t resist leaping at the franchise possibilities. It’s another of Burton’s predictably morbid tales that combines its macabre sense of humor with a familiar franchise blueprint.

The setup follows the standard YA formula to the letter: a dense mythology, a teen hero who realizes his potential, and room for a sequel that we will probably never see. The material can almost exclusively be described as a pastiche of other films, comic books, television, and literature. Elements of Groundhog Day, Harry Potter, and Burton’s own Big Fish result in a familiar concoction whose derivative quality supersedes all else. Burton seems content with the superficially unusual quality to everything onscreen, including the characters. Much like Fox’s X-Men titles, many of the gifted youngsters prove to be one-dimensional and defined by their abilities: The invisible boy is nothing more than a running gag about being invisible; the super-strong little girl exists as the living embodiment of irony, but her character doesn’t have a pulse; another child has a stomach filled with bees, but no personality.

The story takes place at a dilapidated orphanage on a small Welsh island. Its headmistress, the eponymous Miss Peregrine (Eva Green), remains the most interesting-yet-underdeveloped character. Under wisps of midnight blue hair and heavy black eye makeup, Green’s vampish and eccentric Peregrine can change into a bird at will (I’ll give you one guess as to what kind of bird). She oversees a school for talented children called “Peculiars”, each with unique abilities. As a type of Peculiar known as a “Ymbryne”, Miss Peregrine protects her students by allowing them to live in a “loop” outside of time, existing in the same perfect day (September 23, 1943) over-and-over again. Every night, she turns back the clock just as German bombers are about to destroy her school, and the students watch as the day rewinds. They can live indefinitely in this day without aging or the passage of time to consider.

There are also bad Peculiars led by a nefarious scientist named Barron (Samuel L. Jackson), who, along with his group of cronies, hunt Peculiars. Behind striking pale eyes and a zapped-white wig, Jackson appears to be having fun as a sharp-toothed baddie (he excels at bringing life to comic-booky villains; see Kingsman: The Secret Service for further evidence). Barron must consume the eyes of Peculiars to prevent becoming a “hollowgast”—an invisible, slender, tentacle-laden monster with no eyes, a lot of teeth, and an appetite for children. And so Barron hunts down Ymbrynes and their schools, trying to close their loops because, hey, this mythology needs a villain.

But none of this mythos has much to do with the film’s basic plot or its protagonist, both of which are dreadfully dull. Asa Butterfield plays Jake, a teen whose grandfather Abe (Terrence Stamp) dies in an apparent attack that Jake’s parents (Kim Dickens, Chris O’Dowd) seem quick to rationalize. Abe used to tell Jake stories about Miss Peregrine’s school, and so he’s familiar with the students when he happens upon them during a trip to Wales. Immediately, all of Miss Peregrine’s students want him to stay, probably because they’re not used to having anyone else around—especially Emma (Ella Purnell), who would float away if she weren’t wearing lead shoes. Of course, Jake and Emma have a budding romance, which is strange since Emma and Abe also had a romance.

Anyway, Barron eventually shows up, and Jake must save the students in a climactic battle sequence that pays dubious homage to Ray Harryhausen with computer-generated skeletons and cotton candy-covered hollowgasts. The production looks visually textured thanks to the work of cinematographer Bruno Delbonnel (Inside Llewyn Davis) and production designer Gavin Bocquet, except when we’re looking at wholly computerized scenes. Fortunately, there’s a neat deviation when one of Miss Peregrine’s students, a disturbed weirdo named Enoch (Finlay MacMillan), brings to life two stop-motion creatures that battle to the death—a sequence that warmly recalls earlier Burton fare.

Unfortunately, the rest of Miss Peregrine’s Home for Peculiar Children feels strange for the sake of strangeness. This is a shame because there was a lot of potential to tell a story that resonated with young people who feel like outsiders. Instead, the film is content being a tedious amalgamation of established franchise concepts. The film never delves into how these children feel about being perpetually young or considers their feelings of otherness. The entire world and characters of the film feel like a gimmick, rather than a way for younger viewers to identify with the emotional states of the characters. Much like Burton’s recent attempted franchise-starter Dark Shadows, not to mention a dozen based-on-a-book adaptations that failed to launch as films in recent years (I Am Number Four, John Carter, The Last Airbender, etc.), this would-be franchise seems dispassionately realized and destined to be forgotten.