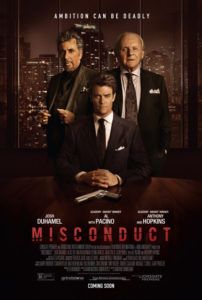 If Misconduct had been made around 1995, audiences would have eaten it up. It’s a John Grisham-style thriller populated by duplicitous lawyers who justify their awful behavior by giving speeches about doing “the wrong thing for the right reasons.” A touch of Fatal Attraction also saturates the movie, where the unfaithful attorney cheats on his wife and suffers for his sins. This kind of yarn would have inspired a major audience draw a couple decades ago, but now the whole thing feels tired and derivative, complete with a multitude of increasingly absurd third-act twists that spoil any goodwill the otherwise B-level star-studded movie might have built.

Keeping the theme of what would’ve performed well years ago, Al Pacino and Anthony Hopkins show up for a paycheck. Had they starred in a thriller like Misconduct in the mid-1990s, it would’ve been a major event. Today, their powerhouse status has petered out, in part because of the natural decline of popularity with age (both men are in their seventies), and in part because Pacino and Hopkins have starred in progressively worse roles over the years (Jack and Jill or Noah, anyone?). Here, they appear tired and bored with the material. The younger cast doesn’t improve matters. Model-turned-leading-man Josh Duhamel is the headliner next to Malin Akerman, Alice Eve, and Julia Stiles, all equally shrug-inducing.

Why so many notable faces were drawn to Simon Boyes and Adam Mason’s formulaic script—aside from the money, of course—remains a mystery. Set in New Orleans, the tepid story follows a budding attorney, Ben (Duhamel), who brings his blatant amorality to a high-powered firm run by Pacino’s character Charles Abrams. Although he’s in a marriage with an icy and distant wife (Eve), Ben meets up with a stereotypically off-kilter ex-girlfriend Emily (Akerman). Turns out Emily has evidence that incriminates her boyfriend, pharmaceutical mogul Arthur Denning (Hopkins), and she wants Ben to expose his crimes. Abrams has long aspired to nail Denning in court, so he backs Ben on the case.

When Emily ends up kidnapped and dead, Ben realizes he’s in over his head. The plot thickens further with various hackneyed developments: A suicide that looks like a murder; a neighborly bystander who’s seen too much; and a dying hitman (Byung-hun Lee) on a motorcycle, who seems inexplicably motivated to take care of witnesses with extreme prejudice. Framed for murder, Ben becomes a wanted man on the run, all while trying to figure out who’s orchestrating the movie’s events. The script doles out twists and turns like the worst kind of thriller, and first-time director Shintaro Shimosawa doesn’t resist allowing his performers to overact their roles. Equally overcompensating is composer Federico Jusid, who seems to think he’s providing music to a Hitchcock picture.

Duhamel is hardly sympathetic as the hero, lacking the requisite everyman charm to endear the audience to him like, say, a younger Michael Douglas or Tom Cruise. Pacino adopts an awful accent that makes him sound more like his character from Carlito’s Way than an appropriate Louisianan inflection. And Akerman seems very miscast in her psycho ex-girlfriend role. Barely released in theaters, the movie also debuts on VOD the same day, but it should have got direct-to-video (as in VHS, not DVD or Blu-ray). If there’s anything good to be said about Misconduct, it’s the sharp lensing by Michael Fimognari. His slick camerawork holds extended takes and adopts interesting angles that at least make the experience visually competent. If only the same could be said for the story or performances.