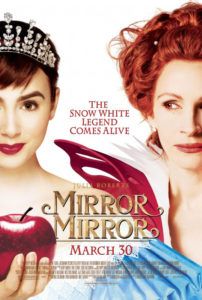 A twist on the Snow White legend, Mirror Mirror opens with narration by Julia Roberts, who plays the Evil Queen. She tells us that this is her account and paints a backstory where her irreverent character takes over a happy kingdom in which “apparently nobody had a job; they just sang and danced.” She brags about seducing a widowed king and later having him killed, and how she imprisoned the princess, Snow White, here played by Lily Collins (Abduction). The Queen’s alternative outlook suggests the film will be a revisionist take on the original fairy tale by shifting the protagonist from Snow White to the Evil Queen, but alas, as the film carries on, this opening gives way to a messy retelling of the same old fable where good triumphs over evil. With obvious ambitions of becoming a new generation’s The Princess Bride, this outdated material gives us no reason to deviate from Disney’s 1937 classic as the go-to version of Grimm’s fairy tale.

All the usual characters are in place and serve their customary function. When Snow White narrowly escapes a death sentence, she joins forces with the Seven Dwarves, who are not named for their character traits—Napoleon (Jordan Prentice), Half Pint (Mark Povinelli), Grum (Joe Gnoffo), Grimm (Danny Woodburn), Wolf (Sebastian Saraceno), Butcher (Martin Klebba), and Chuckles (Ronald Lee Clark) each have a distinct personality. She learns their bandit ways, and they become the Merry Men to Snow White’s Robin Hood, stealing from the rich and giving to the poor. Meanwhile, Prince Alcott (Armie Hammer) catches the eye of the Evil Queen, but his heart is promised to Snow White, and so the Queen gives him a love potion that turns out to be a “Puppy Love” potion. This does not mean his love is silly and adolescent; rather, he behaves like a puppy (barking, lapping, etc.). Soon the Queen wants everyone dead and, after enlisting Nathan Lane’s “wacky” servant character Brighton to fail at the task, she calls upon “The Beast”—an amalgam of a dragon and The Big Bad Wolf.

Screenwriters Melissa Wallack and Jason Keller infuse each scene with an unfortunate series of flat jokes that make the film difficult to endure. It’s real squirm-in-your-seat unfunny stuff. Pathetic attempts at snarky, yet modern humor lace dialogue, and the film’s sluggish pacing seems to linger on these unfunny moments, as if pausing to allow us to laugh. Except we’re not laughing. Most of these punch lines fall on Roberts to deliver, being the exaggeratedly superficial queen who’s in denial about her age, and they’re delivered in her silly faux-English accent to no avail. When Roberts isn’t onscreen, the film relies on slapstick perpetuated by the actors playing the Seven Dwarves, and the gender role-reversal of Prince Alcott as the resident damsel in need of rescue. Amid physical gags, at least we can be thankful the Dwarves haven’t reduced themselves entirely to the humiliating shtick often given to little people.

Fortunately, the production features stunning costumes designed by the late Eiko Ishioka and glorious sets realized by production designer Tom Foden. Having teamed with the film’s director, Indian-born visionary Tarsem, thrice before (on The Cell, The Fall, and Immortals), Ishioka’s costumes display a visual luster that far outdoes anything else happening onscreen. An early scene boasts Roberts in a lavish orange gown resting on a half shell throne; a ball sequence features Snow White in an impressive swan dress that would make Björk proud. Around the characters, Fonden has constructed sets that have leapt from the pages of a storybook, from snowy Birch-laden woodlands to a castle topped with phallic spires and golden domes. Unfortunately, Ishioka and Fonden can’t distract from the dull storytelling, no matter how gorgeous their ornamentation.

Although the notion of reinventing the Snow White legend has its possibilities, Mirror Mirror takes no risks in its revisitation, despite its opening. If the story had continued from the Evil Queen’s point of view, there might’ve been something different to garner our attention, something to warrant the film’s use of tongue-in-cheek humor. Instead, the film follows a time-tested, boring story structure headed by an even more boring Snow White. Collins—while she’s pretty and looks the part—imbues no personality into the role, and she has little-to-no chemistry with her male costar Hammer. Audiences will no doubt be talking about her imposingly bushy eyebrows more than her performance. There’s simply nothing clever about the screenplay, which becomes something of a tragedy when you consider how that wastes the talent of Tarsem, Ishioka, and Foden.