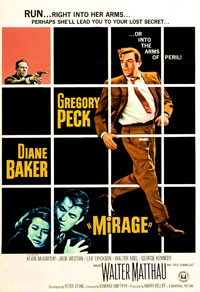 Mirage follows in the footsteps of Alfred Hitchcock thrillers and, more to the point, Stanley Donen’s success with the Hitchcockian Charade from 1963. Gregory Peck stars as a cost accountant with a case of amnesia, who, during his desperate mission to restore his memory, exposes a scheme to profit from peace. It wouldn’t be the first time Peck had played an amnesiac; he appeared in Hitchcock’s Spellbound (1941), a picture memorable for its themes of psychoanalysis and Freudian nightmare imagery conjured by William Cameron Menzies and surrealist Salvador Dalí. Mirage, released in 1965, would become a minor success for Peck and its director, the formerly blacklisted Edward Dmytryk. The film conforms nicely to a category of 1960s mysteries that combine old-fashioned thrills with a comical sensibility of the irreverent Swinging Sixties. When he isn’t dodging bullets or asking questions about his past, Peck’s character talks his way out of orgies and quips alongside scene-stealing Walter Matthau’s Private Eye. It’s a pleasantly entertaining set-up that makes excellent use of New York exteriors and has an inspired, if subtle, formal approach to the protagonist’s memory lapses.

Based on the 1952 novel Fallen Angel by Walter Ericson, Mirage was written by Peter Stone, who had authored the book and screenplay of Charade. That film had been a major hit for Universal, and for several years afterward, the studio sought to replicate its formula. Stone was enlisted to adapt comparable material and apply a similar touch of humor, romance, and thrills into scenarios worthy of Hitchcock. Dmytryk also brings an air of film noir expressivity to the proceedings. Shooting in black-and-white long after color film stock had been the standard, Dmytryk and cinematographer Joseph MacDonald find bold uses for shadows, starting with the opening power outage at the fictional Unidyne skyscraper. Inside the dark building, some workers prepare for a “braille party” (“Get it, the touch system,” one woman explains), while Peck’s David Stillwell finds himself disoriented. People seem to know him, but he doesn’t know himself. His building seems to have four sub-basements, but then it doesn’t. His refrigerator is empty; then it’s stocked full. Two empty years seem to be all that remains of his memory, and everything before that is a blur. He knows this: A friend and businessman named Charles Calvin (Walter Abel) has died after leaping to his death from the Unidyne building. Was it suicide? Was it murder? 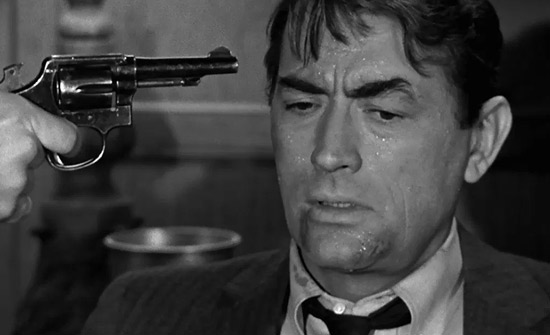 Before any of this, Mirage opens with Quincy Jones’ vibrant score over the Universal Pictures logo. The opening musical themes establish the film’s three thematic obsessions: the studio’s desire to replicate the success of Charade; the story’s vaguely Hitchcockian influence; and its interest in almost dreamlike imagery that represents the fractured, amnesiac mind. The first sound evokes Henry Mancini’s jazzy score from Charade, with its upbeat, percussive bongo tempo. Then a jarring set of sharp strings recalls the pointed notes from Bernard Herrmann’s Psycho (1960) score. To be sure, one could be forgiven for mistaking the score for Herrmann until Jones’ credit appears onscreen. A moment later, a keyboard plays a series of winding notes, reminiscent of Claude Debussy’s Voiles from 1909, that commonly evoke the dissent into a dream sequence. In a few seconds, Jones encapsulates Mirage’s various antecedents through aural cues, and the viewer knows just what to expect. After the opening credits, Jones’ music mostly recedes into the background, but it does the heavy lifting early in the picture.

Confused about his identity and Swiss cheese memory, Stillwell seeks help from a private detective, Ted Caselle (Matthau), who takes the case, his first. A more experienced investigator might approach Stillwell’s story of amnesia and possible conspiracy with incredulity, but Caselle believes him. The two actors make an unlikely but charming pair. Peck, best in understated everyman roles like this, cannot help but draw our sympathies. Matthau is perfect as the smart-alecky “boy detective” sidekick who occasionally comes through. “Wouldn’t it be hilarious if you did know what you were doing?” says Stillwell in a droll aside. What they uncover is a scheme involving a criminal entity known as Major Crawford (Leif Erickson), who has hired a series of armed goons—among them George Kennedy, who starred with Matthau in Charade—to capture Stillwell for reasons that prove unclear until the final moments of the film. On the periphery, Diane Baker plays Shela, Stillwell’s uncertain love interest who knows more than she admits. Kevin McCarthy also appears as Stillwell’s boss, who has a crucial role in the finale, memorable for its tense game of Russian roulette.

Dmytryk, one of the Hollywood Ten, directs Mirage with an almost recessive style. Before earning his spot on the blacklist, the Canadian-born director had developed a reputation for film noir with Murder, My Sweet (1944) and Cornered (1945). In 1947, the same year he earned an Oscar nomination for Best Director of Crossfire, the House Un-American Activities Committee (HUAC) compelled Dmytryk, a card-carrying member of the Communist Party in the mid-1940s, to testify against his peers. Since he refused, he was sentenced to six months in prison and fired from RKO. Dmytryk fled and spent three years in England—where he made Obsession (1949) and Give Us This Day (1949)— before finally returning to the United States due to an expired passport. Captured and imprisoned for contempt, Dmytryk underwent another round of hearings and eventually gave evidence against the party members by whom he felt betrayed and abandoned. The experience, which Dmytryk details in his book Odd Man Out: A Memoir of the Hollywood Ten, did not mean the end of his career. He returned to Hollywood and made a run of respectable productions like The Caine Mutiny and The End of the Affair, both in 1954. 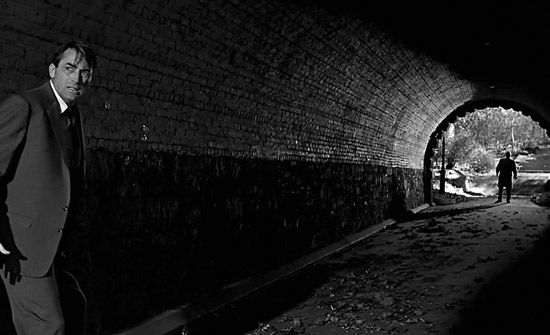 Mirage came near the end of Dmytryk’s career as a filmmaker, after which he turned to academia, lecturing about film and writing several clear-minded books on screenwriting and editing. Many critics offered only lukewarm praise for the film. The Variety staff noted the confusing plot, arguing, “Mirage starts as a mystery, unfolds as a mystery, ends as a mystery.” A.H. Weiler’s tepid response in The New York Times reduced the experience to “diverting” and “fairly taut, if not especially credible.” Even those involved with the production would later express their neutral feelings about the experience, questioning whether Dmytryk had checked out by that point. Stone remarked, “I don’t think he was concentrating on the picture. It doesn’t have any directorial style.” Baker found Dmytryk to be “a really bright man and very talented, but he was very calm and quiet during the making of this. It was almost as if he was subdued.” Peck’s biographer Gary Fishgall wrote the actor had felt the picture had “lack of panache.” Peck said, “It needed a much more modern kind of photographic approach and less literalness.” The actor, who was no stranger to criticizing his directors, no doubt hoped for something more like Charade, which he would get in his next collaboration with Stone and Donen in 1966’s Arabesque.

Next to Hitchcock or even Donen, there’s a certain forthrightness to Dmytryk’s style in Mirage that could also be described as lacking obvious energy. After all, Mirage arrived just as a major stylistic shift in Hollywood was underway. 1965 brought Roman Polanski’s Repulsion, Sergio Leone’s For a Few Dollars More, and Sidney Lumet’s The Hill, not to mention imports like Federico Fellini’s Juliet of the Spirits or Jean-Luc Godard’s Alphaville and Pierrot le Fou. Hollywood started to take cues from European rule breakers, and the landmark Bonnie and Clyde was only two years away. But Dmytryk clung to a classical mode of storytelling and visualization. In his book On Editing, he writes about Mirage and making a conscious choice to avoid over-cutting and allowing a scene to speak for itself. When Stillwell finds Caselle dead, he responds in a rare outpouring of rage that another director would have cut into jagged pieces or shot from more expressive angles, given that it marks the only occasion where Stillwell loses his composure (aside from the climactic reveal of what caused his trauma in the first place). Dmytryk reasons, “Obviously, this scene played best in a series of wide shots, where the full range of Peck’s righteous anger could be given full play.”

Although criticisms of the film noted its deficient style, its detractors ignore the subtle use of time and flashbacks in Mirage. Given the amnesia-inflicted storyline, Stillwell’s patchwork mind occasionally snaps back to an earlier moment in the film or a memory not yet seen by the audience. He frequently sees blips in his mind’s eye, which Dmytryk represents by cutting away to a random image—such as Stillwell and Calvin meeting by a tree. The image has no context at first, not until Stillwell remembers the meeting’s nature. Rather, Dmytryk and editor Ted Kent turn Stillwell’s memories of earlier scenes into almost subliminal flashes onscreen. In the finale, when Stillwell completely recalls the moment in which his severe trauma occurred and caused his bout of shock-induced memory loss, Dmytryk doesn’t use a slow fade or transitional wipe into the past. The switch is made with a match cut—or perhaps more accurately, a lighter cut: Crawford lights Stillwell a cigarette using a lighter owned by Calvin, prompting a cut to Calvin using the same lighter, at which point Stillwell remembers what happened to Calvin. Memories lost from dissociative amnesia, while triggered by trauma, often return from a similar trigger. In this case, the lighter prompts Stillwell’s total recall of what happened. 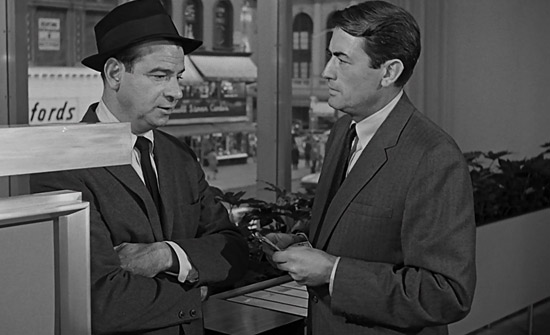 The modest formal touches Dmytryk uses throughout Mirage to represent a fragmented mind employ the same functional logic as the scene the director describes where Stillwell tears apart a room in a rage. This form-follows-function approach, commonplace among those who worked in the studio heyday of Classical Hollywood, nonetheless anticipates the interest in time and memory explored by postwar European arthouse filmmakers like Godard, François Truffaut, and Andrei Tarkovsky. Dmytryk’s style clings to the traditional polish of Hollywood filmmaking, complete with bland interiors that, admittedly, look like cheap, minimally decorated sets built on a soundstage. And yet, there’s a tension in Mirage between the house style of studio filmmaking and the more experimental formations of time and memory. If the film at times feels like a generic studio project, its portrayal of Stillwell’s mental state anticipates more radical structural deviations in, say, Steven Soderbergh’s The Limey (1999).

Mirage offers a cynical view of organizations outwardly invested in peace, even as they use that marketable stance as an opportunity for profiteering. The film’s idea about illusions, whether they exist in the mind or on the surface of things, raises questions about reality during a year in which the American government made questionable claims about its role in the Vietnam War and took harsh action against peaceful protests in the Civil Rights movement. 1965 was a year that most Americans didn’t trust their government, and so Mirage offers a blithe entertainment to reflect that untrusting world. Dmytryk, though, barely touched on Mirage in his autobiography. “Nothing to be ashamed of there,” he wrote about the film. Upon reflection, it’s better than most people, even those involved in its making, give it credit for. The appealing cast, naturally engrossing story about a man trying to remember his past, and often breathless chases through the streets of New York make the film a superior riff on Charade—or, if you prefer, Hitchcock—style.

(Note: This essay was suggested and commissioned on Patreon. Thank you for your support, Joe!)

—. Odd Man Out: A Memoir of the Hollywood Ten. Southern Illinois University Press, 1995.

—. On Film Editing: An Introduction to the Art of Film Construction. Focal Press, 1984.