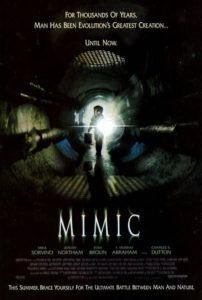 There’s not one aspect of Guillermo del Toro’s first Hollywood project, the creature-feature Mimic from 1997, that doesn’t compare to another, earlier film in the same genre. After establishing its backstory, the screenplay credited to Matthew Robbins and Del Toro—with uncredited contributions from John Sayles and Stephen Soderbergh—follows a familiar formula in which human survivors trapped in a dark, hostile, enclosed structure must survive a horde of monstrous creatures. Not even the long-awaited “Director’s Cut” on Blu-ray, containing 7-minutes of additional scenes, deepens the characters or transcends the film’s reliance on established conventions. Nevertheless, Del Toro infuses style into the details of this routine monster yarn, and along with his admirable cast and talented crew, makes a serviceable effort with enough panache to overlook its familiar blueprint.

Mimic is based on the short story by Donald A. Wollheim, and was originally planned as one of three genre shorts, which included Impostor and Alien Love Triangle, from Miramax. But after the unexpected blockbuster success of Scream in 1996, the adaptation received a full-length feature greenlight from studio heads Bob and Harvey Weinstein. For them, this meant dumbing-down the story and pouring on gallons of blood for broad appeal; their horror offshoot Dimension Films would release dozens of movies with this purpose in mind (The Faculty, Phantoms, etc…). They hired Del Toro after his impressive debut with Cronos, a Mexican vampire tale from 1993, and forced him to shoot scenes not in the script; the novice Hollywood director succumbed and for years the end result was not as he had wished. Then again, Del Toro has said in interviews promoting the new “Director’s Cut” Blu-ray that this latest version does not represent his original vision. But it does include character-building scenes that he was originally forced to trim.

The story begins in New York City, where cockroaches have spread the fictional “Strickler’s Disease” and all but wiped out Manhattan’s children. Peter (Jeremy Northam), deputy director of the Center for Disease Control, brings on entomologist Susan Tyler (Mira Sorvino) to devise a strategy and eliminate the roach threat. Using advanced DNA remapping, she combines termite and mantis genes to create the “Judas Breed”, a bug that imitates cockroaches, infiltrates their nests, and delivers an enzyme to eradicate their population. After a few months, her insect creation was designed to die off. But as Ian Malcolm said in Jurassic Park, just one of the many films Mimic borrows from: “Life finds a way.” Cut to three years later, when Susan and Peter are married and trying to get pregnant. Susan discovers not only that her Judas bugs have unexpectedly survived, but that her genetic tampering has caused insect generations to mutate at an alarming rate, causing big, nasty, slimy creatures to inhabit abandoned subway tunnels, eating the occasional hobo or curious, buck-toothed kid.

Absurd is a subplot involving a shoeshine man (Giancarlo Giannini) whose grandson clicks spoons together to imitate the sounds of his grandpa’s customers. The boy, Chuy (Alexander Goodwin), can also identify any shoe he sees, except for the insect feet of a giant Judas bug, which has adapted to look like a human in a trench coat. Rocking in a perpetual trance-like state, Chuy calls the bug “Mister Funny Shoes” and incites unintentional laughs. The child’s only function in the plot is to wander down into the sewers and give our characters someone to worry about, chase after, and die trying to protect. Susan and Peter are joined by a sole subway cop (Charles S. Dutton) and Peter’s sarcastic partner (Josh Brolin) in a mission to destroy the insect threat.

Fortunately, Del Toro’s cast (aside from Goodwin) has enough talent among them to hold the material together. In the mid-1990s, Sorvino had been somewhat typecast as that charming air-head from Mighty Aphrodite and Romy and Michelle’s High School Reunion, but she finds her bearings here as an egghead and believable heroine. Northam’s erratic character goes from loving husband to an inconsistent hero whose mood shifts from panicky to brave in an instant. Dutton provides some loud-mouthed comic relief. And Brolin’s insignificant character supplies ample raw materials for the Judas bugs’ heap of dead bodies. To be sure, Del Toro doesn’t shirk away from killing his characters off, including a pair of comical inner city youngsters just trying to make a buck.

By the climax, Del Toro has achieved the B-movie equivalent of Aliens, with several sequences mirroring James Cameron’s classic sequel to shameful degrees. In a scene that recalls the one in Aliens where Sigourney Weaver’s Ripley suddenly finds herself amid a nest of unhatched alien eggs, Northam’s character turns around and realizes he’s just entered the Judas Breed’s nest, complete with eggs and man-sized bugs dangling from the ceiling. Meanwhile, Susan has her own “Get away from her, you bitch!” scene as she protects Chuy from the crucial king Judas bug. You could also argue that Dutton plays a stand in for Bill Paxton’s unnerved Hudson, and Goodwin is a male version of Newt. The only thing we’re missing here is a sleazy corporate stooge who wants to hand over the Judas bug to his company’s bio-weapons division for a profit. In other ways, the film follows an underground Jurassic Park, complete with F. Murray Abraham’s veritable Ian Malcolm preaching to Susan about the dangers of Playing God.

Silly as the plotting may be, Del Toro’s use of darkness and his gift for injecting suspense into familiar sequences is undeniable. Along with David Cronenberg’s longtime production designer Carol Spier, Del Toro adorns his dank sewer settings (later employed in his Hellboy movies) with dripping walls, crumbling tunnel porticos, and enough atmosphere to give any viewer the willies. Add to this impressive, K-Y slathered practical makeup effects by Rob (The Thing) Bottin, and suddenly the production transforms into something worth savoring for the details. Though unfortunate ‘90s-brand CGI renders the larger beasts during action scenes (darkness helps to mask flawed animation), in those dripping close-ups of Judas bug dissections or their ominous movements, seeing an actual creature creation helps involve the viewer. And those familiar with Del Toro’s body of work know to expect only the best, gooiest creature designs.

Like many young directors to survive the Weinsteins, Del Toro has since moved on to greater projects over which he’s had greater control. He now produces his own pictures and negotiates final cut for himself, whereas with Mimic he suffered as the Weinsteins’ rag doll. Despite stories of the Weinsteins interfering on set and demanding cuts in post-production, the experience doesn’t feel like a troubled production—Del Toro’s eye is too self-assured to ever look or feel sloppy. But the new “Director’s Cut” doesn’t add many noticeable scenes; mostly padding that moderately improves upon the theatrical cut. Trouble is, Mimic could never be more than a low-effort, late-night viewing that requires little from the viewer, except to appreciate the subtleties carved by Del Toro’s hand. On those terms, you could do much worse.