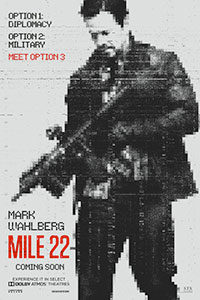 Another actioner from the team of director Peter Berg and star Mark Wahlberg, Mile 22 avoids the docubuster phenomenon that defined their earlier collaborations on Lone Survivor (2013), Deepwater Horizon (2016), and Patriots Day (2016). Instead, their latest resolves to be something more akin to Berg’s The Kingdom (2007), a shoot-em-up that feels vaguely ripped from the headlines, albeit entirely fictional. Like that film, Mile 22 becomes edgy and violent during an extended chase and shootout sequence on roads, through a crowded city, and on foot in residential areas. The promising, stripped-down story follows a top-secret division of U.S. intelligence operatives—so secret they’re all but entirely removed from any connection to official government channels—as they attempt to extract an informant across 22 deadly miles in an unspecified Asian country. It might be exhilarating if not for the slapdash formal approach of Berg’s aesthetic and the mystifying, awful performance by Wahlberg.

Ever spewing macho, pseudo-philosophical bullshit in a series of after-the-fact interviews that give the movie shape, Jimmy Silva (Wahlberg) remains the ground leader of Overwatch, a dirty ops task force led by James Bishop (John Malkovich, beneath a distracting crew cut wig). Rather than a regular tough guy, however, Jimmy’s on-the-spectrum level of genius is established during random newsreels and archival footage supplied over the opening credits. He’s an orphan; he’s stricken with a brain that moves too fast, requiring him to snap a wristband to calm himself down; and he’s capable of highly complex problem-solving, evidenced by his favorite pastime: putting together puzzles in which every piece is white. Of course, whenever Wahlberg plays the smartest guy in the room, you know you’re in trouble. Watching him trying to look intelligent and badass at the same time is embarrassing (take The Happening or The Gambler, where he played academics). It’s like watching Dirk Diggler reading lines he doesn’t understand to assume an image he’s incapable of mastering.

Wahlberg’s groan-worthy performance as a hard case robs Mile 22 of its other, minor joys. As the erratic and unstable Jimmy, he’s always shouting at his teammates. He berates Alice (Lauren Cohan) for concentrating too much on her ex-husband (Peter Berg) and their child; meanwhile, in an underdeveloped subplot that goes nowhere, Alice must use custody software that prevents her from cursing in video or text communications with her ex-husband. After the team receives some lousy intelligence about the location of some Cesium, a chemical element used in radioactive bombmaking, Jimmy slaps a piece of cake from the hands of Sam (Ronda Rousey) on her birthday and loudly announces, “No birthday cake!” Jimmy calls the computer support staff “fucking nerds,” even though they’re watching and protecting his ground team using drones, hacked security cameras, and satellite imagery. He’s such an unlikable, belligerent character, captured in a laughably bad and miscast performance.

The screenplay by Lea Carpenter, a former publisher and editor turned war novelist, reeks of unfocused pretension in every scene featuring Jimmy (mostly the entire runtime) as he rants about history, patriotism, nuclear weapons, and how much more he knows about what’s really going on than everyone else. Finally, Bishop shouts at Jimmy, “Stop monologuing, you bipolar fuck!” and echoes the thoughts of anyone watching Mile 22. And yet, Jimmy never stops monologuing, and the viewer’s experience listening to his batshit crazy tirades equates to the physical toils endured by the characters onscreen—an impossible assault from all sides. Berg dedicates nearly a third of his 94-minute gunfest to the treacherous journey from the U.S. embassy to a landing strip, where Li Noor (Iko Uwais, from The Raid movies), a mysterious informant with kickass martial arts skills, will be extracted. There’s a time limit, though. Li has stored information about the missing Cesium on a disc that will slowly disintegrate over eight hours, unless he gives Overwatch a password. He demands to be transported to the U.S. for safety before he reveals the password, and the local government wants him dead, making the journey tense.

Berg, a disciple of Michael Mann, draws clear influence from the iconic street shootout in Mann’s Heat (1995) for the protracted transport sequence, but the shaky-cam photography by Jacques Jouffret renders the experience a bumpy, visual mess. Berg and his team of two editors borrow Michael Bay’s erratic habit of cutting every millisecond as well, which leaves Mile 22 looking choppy and hectic for the duration. Jouffret also seems intent on setting the camera low, getting as far into Wahlberg’s considerable nostrils as modern technology will allow. In any case, it’s all quite verbose and mind-numbing to behold, although the action will keep some viewers rooting for its American heroes. If there’s anything to be admired about Mile 22, it’s the ending, which suggests that the so-called good guys don’t always win and aren’t necessarily always just. And yet, somehow, the movie still feels like a paranoid hunk of pro-military jingoism, as if the downer ending, which sets up an unwanted and unwelcome sequel, demands that America remain on edge and intensify its defenses. But worst of all, it forces audiences to endure a ridiculous central performance that single-handedly derails the entire movie.