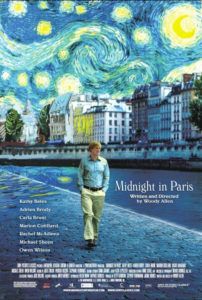 Woody Allen has always been inspired by cities. For decades, his turf of choice was New York City, the home of Annie Hall and Manhattan and Crimes and Misdemeanors. Only recently, in the last decade, Allen has branched out, striking pointedly British notes with the London-set stories Match Point and Cassandra’s Dream. Then he evoked the raw European sexuality of his Spanish locale (and stars) with Vicky Cristina Barcelona. And now, after more than forty films, Allen embraces Paris in all its romanticized glory with Midnight in Paris, a blithe, lovable comedy about those greener pastures of yesteryear where times were simpler and seemingly carefree, at least in our imagination. Seen through the filter of artistic perception, and beautifully shot by Darius Khondji, Paris now and then has rarely had such a welcoming proxy as this film.

Touristy though his approach may be, Allen’s idealized, painterly depiction of the City of Lights works from the perspective of his characters, all vacationers or locals in love with Paris. Owen Wilson plays Gil, the Allen role, as many actors from Kenneth Branagh to Larry David have done in the last decade or so. A hack Hollywood screenwriter, Gil takes a pre-wedding holiday to Paris with his fiancée, Inez (Rachel McAdams), and her right-wing parents (Mimi Kennedy and Kurt Fuller). With aspirations of giving up his screenwriting and becoming a serious novelist in the vein of his idols—a 1920s Paris crowd consisting of Fitzgerald, Hemingway, and Elliot—Gil takes flak for dwelling on the glories of the “Golden Age” of Paris from Inez and her intolerable, know-it-all friends, Carol (Nina Arianda) and Paul (Michael Sheen), who insist “nostalgia is denial”.

While out walking the quiet streets of Paris one night, a mildly inebriated Gil finds himself getting into an old-timey automobile with a group of dapper partygoers. Turns out Gil has somehow (nevermind the details, Allen doesn’t) traveled back through time into the 1920s, where he humbly proceeds to debate the merits of good writing with the likes of his idols. F. Scott and Zelda Fitzgerald (Tom Hiddleston and Alison Pill) pull him here and there, introducing him to the preachy Hemingway (Corey Stoll) and a no-nonsense Gertrude Stein (Kathy Bates). Night after night, Gil takes these midnight walks, travels back in time, and meets someone new from his ideal past. There, he begins to fall for the beautiful Adriana (Marion Cotillard), Picasso’s lover, and realizes what the audience already knew—that he and Inez are grossly mismatched.

Much of the joy here comes from Wilson’s natural, modern charm set against the varied historical personalities at work. Unlike many quasi-Allen characters, Wilson doesn’t play the role as a neurotic; rather, just a self-doubting artist beaten down by modernity’s domineering ways—namely Inez and company. Refreshing then are run-ins with surrealists Salvador Dali (a riotously funny Adrien Brody), Man Ray, and Luis Bunuel, offering a hilarious alternate origin for The Exterminating Angel. And Wilson delivers the film’s best line when Hemingway asks if he’s ever hunted. “Only for bargains,” Wilson says with a smirk. Meanwhile, Sheen is pitch-perfect as the smug intellectual, and Kennedy is contemptible as the materialistic future mother-in-law, nose upturned. This is a flawlessly cast film with many familiar faces and great performances, some large, others incredibly brief. But with everything going in, there’s much to savor.

The film has much in common with Allen’s last picture, You Will Meet a Tall Dark Stranger, which suggests that those who believe in the paranormal (telepathy, reincarnation, etc.) seek only to escape the harsh realities of life by hoping for something impossible and extraordinary. Through Gil, Allen argues that nostalgia prevents us from acknowledging the present, and serves as a sort of self-defeating escapism. And yet, one cannot help but believe that Allen, too, loses himself in paranormal or nostalgic dreams. After all, the sole character who finds true love in Stranger finds it through coincidence impelled by her belief in paranormal phenomenon; likewise, Gil finds his happy ending through a chance meeting with a fellow Cole Porter lover—if these characters didn’t embrace their fantasies, they would not have found happiness. Allen seems to argue that escape is healthy, if limited, but we should never lose touch with our present selves, nor our dreams. Moreover, Stranger was filled with contemptible characters, whereas this film never ceases to be anything but charming, even with the acerbic characterizations of Inez and her parents, making his message easier to accept.

Another Allen film with which this one will undoubtedly be compared is his 1985 venture, The Purple Rose of Cairo, as both employ a bit of fantasy-becomes-reality magic. Whereas Jeff Daniels’ out-of-the-past character steps off the “modern” moviehouse screen to become Mia Farrow’s living fantasy, here Wilson steps into the past to meet his own ideal. Both protagonists soon discover that reality is more tangible (albeit fleeting) than fantasy, a prevalent theme in Allen’s work. The familiarity of this, as well as other recognizable thematic trends present in Midnight in Paris, may dissuade those versed in Allen’s oeuvre from declaring his latest a truly original work. But it’s a minor association. Falling in love with this film despite its similarities to other Allen films is easy. One cannot deny what can only be described as renewed energy pouring into his storytelling and dialogue, generating what is easily one of his most endearing and fanciful efforts in his career. It’s evident that he hasn’t had this much fun making a film in years, and that Paris inspired him like the many artists in his tale. For that reason, the film is reaching wider audiences than the usual Allen crowd, and will surely be remembered as one of the filmmaker’s most delightful comedies.