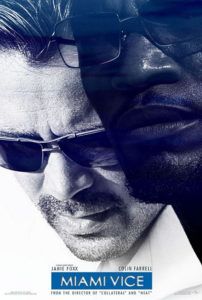 Although it’s called Miami Vice, Michael Mann’s film from 2006 has little in common with the television show (1984-1989) that inspired it. Fresh off Collateral in 2004, Mann returns with another gritty crime drama that, unlike the show, seems to take place in the real world, as opposed to the glitzy, cocaine-fuelled world of 1980s television. Mann executive produced the original series and therein helped popularize, for better or worse, pastel flash, Don Johnson, and rolled-up suit sleeves. In a famous anecdote, NBC executive Brandon Tartikoff inspired the show by writing himself a note that read merely “MTV Cops”, but that description hardly fits what Mann has accomplished in his return-to-roots production. And despite some curious inclusions, such as dueling shower scenes, excessive talk of mojitos, and a soundtrack of rock songs that seem ten years out of date, Mann’s status as a stellar crime filmmaker is well supported by the result.

Released in the summer of 2006 to mostly negative reviews, Mann’s production managed to earn $164 million in worldwide receipts, just reaching its lofty $130 million price tag. Several viewers and critics complained that the film has little in common with the TV show. For example, there’s no nod to Jan Hammer’s theme song for the show; though, Mann makes amends by including a cover of Phil Collins’ “In the Air Tonight” for a trip down memory lane. Sonny Crockett and Ricardo Tubbs (originally played by Don Johnson and Philip Michael Thomas, respectively) appear in name only, here played by the production’s high-paid actors Colin Farrell and Jamie Foxx. But beyond those minor similarities and the title, that’s where associations end. Much like Brian De Palma’s complete restylization of the 1950s TV series The Untouchables into a film in 1987, Mann takes the brand name and makes it his own.

Mann’s dense plotting sends Crockett and Tubbs out to discover the leak in a botched FBI sting operation, which led to one of their key informants (John Hawkes) being exposed to a violent Aryan gang. Soon the partners are undercover and auditioning for transportation with the Aryan gang’s Columbian seller, but the seller proves to be the case’s bigger fish—whom they believe is Jose Yero (John Ortiz), part of an intricate international web of drugs and guns. But Yero turns out to be just the jealous middleman who watches as Crockett and Tubbs, fronting as top-tier carriers, quickly gain the trust of the reclusive cartel leader Montoya (Luis Tosar). As they maintain their cover and deliver the goods (by way of a private jet and go-fast boats), Crockett beds Montoya’s adviser and lover Isabella (Gong Li), who Yero has long pined over. To retaliate, Yero resolves to set them up and before long the case comes to a head deafened by gunfire.

To shoot Miami Vice, Mann once again teamed with cinematographer Dion Beebe, who shot Collateral using a Thomson Viper Filmstream Camera and with it exposed the seedy underworld of Los Angeles at night in a way that had never before been accomplished. Employing the same digital camera, Beebe’s images bring a luminescent glow to nighttime scenes, strangely capturing the artificially illuminated clouds the way no other camera could. It also allows Beebe to add a level of realism to the action scenes, which are already laden with real-sounding gunfire and danger like those in Mann’s Heat (1995). In the last decade-and-a-half, Mann has clearly grown less interested in bright Miami nights, blue skies, and bikinis; he’s graduated to dark clouds, lightning in the backdrop, and all-around grainy mise-en-scène. Shooting in crime-ridden locales around Brazil, the Dominican Republic, Paraguay, and Uruguay, Mann avoided the more appealing actual locations in Florida, perhaps to create the undercurrent of tension and threat of exposure that courses through the film.

Indeed, this is a hard-R production wrought with frightening violence and passionate sex, while a layer of ill-fated tragedy looms over the characters, especially Crockett. Farrell excels in this type of role, as he’s played maligned heroes so often that his upturned eyebrows and unmistakable vulnerability have become his signatures (see In Bruges or Cassandra’s Dream). Even if Farrell’s unfashionable mustache and borderline-mullet hair are distracting, his character’s doomed relationship with Isabella draws us in further. There’s less to Foxx’s character, however; Tubbs worries about his fellow officer and lover Trudy (Naomie Harris), though we spend less time in his head than in Crockett’s, and the film’s emotional pull is decidedly one-sided. Nevertheless, Mann pulls us toward the film by applying an inescapable feeling of unpredictability in each scene. There’s a wonderful moment where, after being searched by goons, Crockett pulls a grenade from who-knows-where and threatens to detonate an entire room. Farrell’s weighty performance is just compelling enough to convince us that he might just do it.

If Mann makes any significant missteps in Miami Vice, his choices of music, namely dull rock songs by Audioslave and the aforementioned cover by Nonpoint, feel out of place and occasionally take us out of the picture. For example, the climactic gunfight is set to a rock song that destroys our involvement in the otherwise exciting sequence. More appropriate are his uses of Latin-inspired music and electronic inclusions by Moby (who Mann used in Heat) and John Murphy, exploring a tonal gravitas that would have served the overall film had it been applied throughout. But Mann made similar musical errors in Collateral that were forgiven, period-inappropriate errors in Public Enemies (2009), and they’re mostly forgiven here too. After all, Miami Vice contains multiple appealing and familiar components of “a Michael Mann film,” including taut realism, professional grit, and emotional detachment even in the direst situations. If nothing else, watch it for a gruff and wounded performance by Farrell, a serious turn by Foxx, and how well Mann uses the moody Miami sky to reflect his characters.