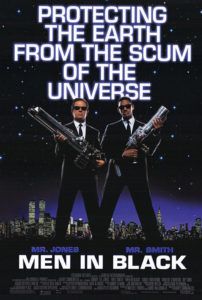 Lowell Cunningham’s obscure Marvel comic from the early 1990s gets the full Hollywood treatment in Men in Black, 1997’s most popular summer blockbuster whose $250 million in domestic receipts was only trumped that year by Titanic. As readied for mass consumption as fast food (and just as sophisticated), the film was guaranteed profitability given Will Smith’s post-Independence Day popularity. Advertisements suggesting these two Smith-versus-aliens projects were similar didn’t hurt either; yet, even though Smith’s style and too-cool-for-school attitude remain intact, the two films could not be more different. Extraterrestrials aside, Ed Solomon’s script has far more in common with Ghostbusters than Roland Emmerich’s War of the Worlds riff, being a comedy about a wise-cracking New Yorker who, while juxtaposed against a comical straight man, faces off against the ugly side of the metropolis. Replace ghosts with aliens and proton packs with neuralizers, and you have yourself a retread.

Shot with no end of wide-angled kookiness by Barry Sonnenfeld, director of The Adams Family and Get Shorty, the screen story, as if you didn’t know, follows a government organization that supervises alien activity on Earth. They’re the stuff of endless conspiracy theories: operating with zero accountability to anyone, they “monitor and police” 1,500-some aliens living on our planet, many of which live disguised among us (Steven Spielberg and Newt Gingrich are among those referenced). The film opens with a scene in which, startlingly, Tommy Lee Jones’ straight-arrow Agent K stops an extra-terrestrial from posing as a border-crossing illegal alien, and in the process shoots the offender into a gory blue gob of slime, his innards sprayed over a hapless border patrol cop. Imagine these same events occurring with a human perpetrator on the US-Mexico border, and K’s actions would not only seem barbaric and cruel, but that of an extreme and bureaucratic agency without the slightest shred of sympathy for its subjects.

Indeed, this is Division 6, an answers-to-no-one government faction endeavoring to keep Average Joe American in the dark. And so, when the opening’s illegal alien threatens the shroud of secrecy by running, rather than being reprimanded or kicked off the planet, its brains are splattered by Division 6 agents, called Men in Black. Given the impressive arsenal of space-aged weaponry we later see is available to them, is it irrational to wonder why K didn’t just zap the opening’s perp with a stun ray? As a result of this killing, the audience is aligned to sympathize not only with the very organization hiding those Top-Secret extraterrestrial conspiracies that movies so often position us to expose and obsess over, but an agency that presents an antithesis to heroes like The X-Files’ Agent Fox Mulder or the alien from Paul.

But I digress. The film then cuts to the city streets, where Will Smith’s trash-talkin’ NYPD cop chases down a perp of his own, only to witness the suspect’s display of impossible leaps and bounds. He’s later convinced the perp was not human, a suspicion confirmed when Agent K recruits Smith’s character, after a lengthy and comic interview process, into the MIB. Now called Agent J and forced to forever give up all ties to his previous life, Smith dons Ray-Ban sunglasses in a commercial-within-a-film where he proclaims “I make this look goooood!” In turn, the actor rivals his own shameless Converse plug in I, Robot.

Spoofy high jinks ensue as K heads their investigation into a crashed flying saucer, the contents of which once included a rogue “bug”, a snarling cockroach-alien that for nearly the film’s duration wears the skin of a devoured redneck farmer (Vincent D’Onofrio) like a rotting rubber “Edgar suit”. Leaving a trail of corpses and slime, the bug’s body count instills curiosity in the oddly seductive coroner (Linda Fiorentino, from The Last Seduction no less), while K searches for clues. Hapless, J tags along in wisecracking disbelief, asking questions that receive K’s terse exposition. We gather the following: If the bug should get its mandibles on a miniature galaxy, somehow the world would end. But there’s no sense of danger or immediacy behind these stakes. Instead, we follow our heroes through a series of scenes driven by a sense of discovery, each scene featuring a new alien creature lovingly crafted by FX maestro Rick Baker, and each offering more opportunities for Smith to expound his usual “Oh, damn!” response.

Watching Men in Black isn’t about following a plot, as Solomon and Sonnenfeld go to great lengths to avoid any kind of real tension. The film’s approach pumps the blood of a frivolous comedy, delivering punchline after punchline, each punctuated with a snazzy special effect or alien creature. None of Baker’s rich alien designs provide more than background fodder; each one has a mere moment onscreen, and then it disappears without consequence. Perhaps a fully developed alien good-guy would have enhanced the proceedings, but then not even the human characters are developed beyond one-note constructions. J gives up his public life without the audience ever knowing what he sacrificed, while the script alludes to K’s personal regrets in the most peripheral way. Fortunately, Jones’ deadpan performance and Smith’s flashy coolness make a fine pair; their back-and-fourths are full of quick dialogue and snappy comebacks. A scene where J asks not to be called names like “Junior” leads to funny reoccurring jibes where K or their boss Zed (Rip Torn) make facetious remarks such as “Go get ‘em, tiger!” just to grate the new guy.

But occasional laughs and zingers can’t make up for the neutered storytelling, or the utter disregard for the scenario. The lightness of the tongue-in-cheek plot and characters renders the material alarmingly inconsequential and, clocking it at about 98-minutes, the tightly edited film is over before we know it. Not that one requires a weighty conflict to be interested, but some level of involvement outside of the film’s many superficialities would have made the experience more than just disposable commercial entertainment. There’s simply no reason to return to this film, as it served its sole purpose when it made back almost three times its budget back in 1997. Still, chances are, when the average viewer watches Men in Black, they absorb only the special FX and flashy celebrities anyway, while all other concerns (plot, conflict, character development, etc.) come secondary.

Sonnenfeld began as a cinematographer for the Coen Brothers, yet he’s carried over none of their storytelling skill or depth. In technical terms, this $90 million production looks great, with Sonnenfeld incorporating sharp camerawork and some fun, fast-moving sequences of alien-themed humor and action. But this is a film to sell toys, t-shirts, a soundtrack (on which Smith contributed his musical talents), to spawn sequels, and make oodles of money in the process. Watching the film some fifteen years later, it’s difficult to be enthusiastic about a product that ends with a dated Dennis Rodman joke and seems to exist only to reinforce Smith’s former status as a style icon. Although enjoyable and fun on its first viewing, unlike so many of executive producer Steven Spielberg’s films, Men in Black wasn’t made to last—it’s a product of the 1990s through and through, and difficult to endure today for its in-your-face commercialism and trivial intentions. There’s nothing timeless and therefore little resonant about the film, and for that it works on only the basic of levels.