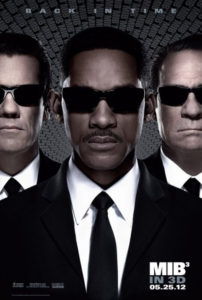 The unwanted child of over-aged parents, Men in Black III comes fifteen years after the 1997 original, and ten long years after the grossly underwhelming 2002 sequel. Emerging from years of troublesome development and facing the daunting task of creating renewed interest in this franchise after so long a hiatus between films, director Barry Sonnenfeld returns for his third go-round with Earth’s top-secret alien-cops and injects his usual wide-angle zaniness into the production. International star Will Smith, who hasn’t appeared in a movie in four years, returns as Agent J, the wise-crackin’ comic relief next to Tommy Lee Jones’ straight-man Agent K. The actors’ signs of age—Smith is 43 and Jones is 65—have begun to show, as does the spent nature of this franchise. But these are all just numbers. Fortunately, the movie’s neat time travel plot and a helluva performance by new costar Josh Brolin make up for the general uninspired tone permeating throughout.

In the opening sequence, Boris the Animal (Flight of the Conchords’ Jemaine Clement), a killer alien from an extinct species, escapes from the MiB Lunar prison to exact revenge on Agent K, who forty years ago shot off Boris’ arm. Cut to Earth, where J and K’s stale odd couple routine feels dialed down. Nothing much has changed in 10 years; K’s terse quality still grates on J, who begins to question why his partner shows no emotion. “What happened to you to make you like this?” becomes the question of the film, and time travel becomes the solution that provides the answer. Boris schemes to destroy K by traveling back to 1969 and killing him before that fateful arm removal; when he does, reality resets, and suddenly Boris’ alien species is attacking our planet. Agent J, immune to the temporal shift for some reason, finds himself in a reality where Agent K died in 1969. The new head of the MiB, Agent O (Emma Thompson), instructs J to travel back through time to stop Boris before he can kill the younger Agent K (now played by Josh Bolin), and thus prevent Boris’ revived species from destroying Earth in 2012. (Did you get all that?)

The script—credited to Etan Coen (Tropic Thunder), though industry reports suggest at least three other screenwriters turned in drafts as well—treats its time travel premise with modest respect, but at least avoids any distractingly annoying paradoxes usually associated with time travel movies. In a satisfying way, the screen story brings everything full circle in the end and manages to inject an emotional bite otherwise absent from this series, even if it produces nonsensical oddities along the way (For example, did you know ruptures in the timeline cause a craving for chocolate milk?) The funniest moments in the movie involve J’s presence in 1969, when racism against African Americans still ran rampant in the United States. His run-ins with bigoted cops and a frightened guy in the elevator make for some hearty time-out-of-joint laughs courtesy of Smith, and the use of the Apollo 11 launch during the climax affords high stakes. The movie also makes clever and funny use of a precognitive alien who predicts possible futures, a Minority Report-inspired character played by Michael Stuhlbarg (A Serious Man) but overdoes it by this character’s breaking of the Fourth Wall in the final scene.

Brolin’s performance is borderline genius. His impersonation of Jones as the younger K recalls his similarly spot-on interpretation of George W. Bush in Oliver Stone’s W., and the idea that Brolin (at age 44) plays a 29-year-old version of K becomes the movie’s best in-joke. Clement, too, delivers a fine performance through Rick Baker’s fabulous make-up design; Clement’s voice for Boris, a combination of James Mason and Freddy Kruger, gives the character, well, character. SNL’s Bill Hader appears in a brief-but-hilarious cameo as Andy Warhol, an undercover MiB agent. Brolin and Clement steal the show, however, whereas Jones’ role serves as mere bookend fodder, and Smith seems to be sleeping through his performance. This suggests the filmmakers should have resisted making just another sequel and perhaps relaunched the franchise altogether in the same manner as J.J. Abrams’ Star Trek. Certainly, the potential was there, given the incorporation of time travel into the plot. Imagine if Agent J was trapped or died in the 1969 timeline, allowing the series to follow a now enlightened, younger Agent K on a series of adventures, thus giving Brolin his own franchise. No such luck, though.

Everything old or familiar about this movie seems redundant and unnecessary, and audiences will feel drawn to everything new. Overall, the movie is surprisingly entertaining. The plot is the most involving of the three, and even contains a moment of dramatic merit. The trouble is, the rusty old elements outweigh the new. Moreover, Men in Black III also houses some very cheap-looking special effects, Baker’s intentionally old-school designs being the exception. Obligatory post-converted 3-D visual downfalls only hurt the production; moviegoers can’t be urged enough to see this movie in 2-D for a better experience. The CGI used is atrocious and not the level one would expect from a blockbuster sequel with a $200-million-plus budget, not to mention a sequel with a desperate need to regain the interest of older viewers familiar with the series, while also attracting a younger demographic. Although not entirely successful in terms of restoring interest in the franchise or justifying yet another sequel after this one, it’s a diverting experience and, at best, better than the 2002 sequel.