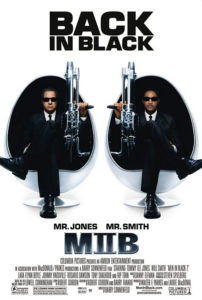 In devising a sequel to 1997’s worldwide hit Men in Black, the creators of the original sci-fi comedy opted not to make an effort. It was enough that big-name stars like Tommy Lee Jones and Will Smith had agreed to return to this well-known franchise. Their names—along with the words “Men in Black II” on the marquee—were sufficient enough to sell tickets. The rest almost takes care of itself: slap together some cheap-looking computer effects; give the stars bigger guns to carry; write more lines for the talking dog (because everyone enjoys talking animals); remind audiences why they loved the first entry by replicating a proven formula; make the runtime 90-minutes-or-less to ensure theaters a maximum daily allotment of screenings. Indeed, Men in Black II earned just over $440 million worldwide, once again confirming for Hollywood how with minimal effort, massive profits can be earned.

Delays and false starts turned the notoriously postponed production of Men in Black II into a five-year ordeal to the screen, as the filmmakers desperately negotiated to wrangle up Jones and Smith and director Barry Sonnenfeld for a $140 million budgeted sequel. Their toiling seemed worth the effort, at the time, given the original’s almost $600 million in worldwide returns. And yet, even though the price tag increased by $50 million between the original and this sequel, the follow-up looks worse, perhaps because this time around, everyone involved was more interested in the economics of a big-budget sequel than making a good movie. As a result, the CGI appears dated and cartoony, the effects shots have a campiness to them not becoming of a Hollywood mega-production, and the tryingly dull screen story does an injustice to Lowell Cunningham’s clever comic book.

Screenwriters Robert Gordon (Galaxy Quest) and Barry Fanaro (Kingpin) couldn’t have put less effort into the story if they tried. The movie opens with MiB Agent J (Smith) reprimanding a giant wormy alien living in the New York City subway system after his new partner (Patrick Warburton) causes an outburst. This scene, which suggests Smith has taken Jones’ place as the resident straight man, is reminiscent of the opening from the original, and ends with J neuralizing his partner. His replacement: Frank, the talking pug from the first movie, whose dirty-minded comments make for comic relief. From here, we meet Serleena (Lara Flynn Boyle), a tendril-laden alien queen who disguises herself as a lingerie model. Why? Because, that’s why. Joining her is a double-headed cohort Scrad (Johnny Knoxville), who serves no other purpose except to fill screentime. Serleena searches tirelessly for a MacGuffin of some kind and, with it, plans to destroy the world, and only Agent K (Jones) knows where the MacGuffin was hidden. And so, J must find K, now a lowly Massachusetts Postmaster, and de-neuralize him so he might remember how to find this world-destroying thingamajig.

Along the way, familiar faces like Tony Shalhoub’s duplicitous Jeebs and Rip Torn’s Zed appear in roles meant only to remind us of how funny they were in the original. Rosario Dawson makes her mainstream debut (after appearing in Kids and Josie and the Pussycats) as a modest and seriously underdeveloped romantic interest for Smith’s character, playing a conspicuously well-dressed pizza parlor employee and witness to alien murder. This all leads to a sloppy climax originally meant to take place atop the World Trade Center towers, but the filmmakers opted to reshoot their climax after 9/11. The plot follows the original’s basic blueprints to the letter, with scenes alternating between the alien baddie’s string of bodies and the Smith/Jones comic dynamic, which feels forced this time around. The necessity for their odd couple routine late in the movie returns Agent K to the role of straight man and Agent J to the slang-talkin’ character more attuned to Smith’s sensibilities as an actor. The major difference between this movie and Men in Black: instead of Ray-Ban sunglasses, there are shameless product placements for Sprint and Burger King.

Call my funnybone broken, but there was one—only one—moment during Men in Black II in which I cracked a smile. An amusing scene occurs inside Grand Central Station, where Agent K opens a storage locker where he’s hidden some needed doohickey. Inside is an enclosed world of tiny Ewok-like people who seem to worship K as a god. The few points of favor earned by this funny peek inside a miniature world are subtracted tenfold during countless scenes of embarrassingly dim and dated jokes. At one point, J returns to his car to find Frank barking along to the radio, which blares “Who Let the Dogs Out”—a joke unfashionable even in 2002. Moreover, J insists on calling Frank “dawg,” smiling as if that’s clever to anyone outside of grammar school. Seeing Michael Jackson during his cameo as a would-be MiB agent was more frightening than funny (no, that wasn’t one of Rick Baker’s makeup creations; Jackson really looked like that). And with the annoying, certainly pointless presence of Knoxville and his tinier Knoxville head to test our patience whenever they’re onscreen, the movie’s overall fruitless attempts at humor just emphasize how little this sci-fi comedy manages to be successful as either comedy or science-fiction.

Franchise sequels should use James Cameron’s Aliens as an enduring go-to guide for how to follow up an established classic. That film took Ridley Scott’s original, elaborated upon the mythology, deepened the characters, and outshined its predecessor in terms of scope. Men in Black II represents a long-established trend in Hollywood where franchises resolve to Xerox the first entry because the filmmakers are either unwilling or too incompetent to attempt something as novel as Cameron once did. Instead of trying something new, Sonnenfeld and his writers go with what works. In rare cases, sticking with a similar formula gets the job done (see Spider-Man 2, The Bourne Supremacy, etc.). But most of the time, we end up with something like this—where the end product is insultingly retreaded without the slightest inclination toward newness or creativity. We should expect more from a sequel, not less. Popular lines of dialogue recur. Characters learn the same lessons all over again. Same shit, different day. For its lousy production values, inane plotting, and lazy acting, it’s a difficult movie to endure. But as a sequel, it’s intolerable.