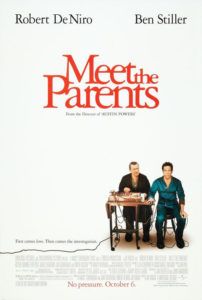 Remember the sequence in Annie Hall where Diane Keaton finally introduces Woody Allen to her bizarro family? Imagine extending that into a feature length comedy, and that should give you some idea of how Meet the Parents plays out. Director Jay Roach (the Austin Powers franchise) and the impressive cast exercise pitch-perfect comic timing for the ultimate display of comedic escalation, exploring the title’s setup to its fullest. However formulaic and repetitive it proves to be, the movie achieves its intended laughs and even several memorable moments of outrageous comic calamity.

Disaster quickly piles up when Greg Focker (Ben Stiller) attempts to prove he’s worthy of Pam Byrnes (Teri Polo) to her intimidating ex-CIA profiler father Jack (Rober De Niro). As the resident outsider, Greg desperately attempts to inject himself into a tight family unit he doesn’t understand (nor should anyone), and he goes to painful-to-watch lengths to do so. He’s desperate for Jack’s approval, which is apparently required before Greg can propose to Pam. Trouble begins with some light situational awkwardness, then advances to full-on disaster when Greg accidentally pops a champagne cork into the urn of Jack’s late mother. It’s a clash of cultures, manners, and personalities that spins out of control within moments and only becomes increasingly exaggerated as the movie goes on.

The quartet of credited writers rely on two primary jokes to sustains laughs. The first comes from Greg’s last name, Focker, which offers the PG-13 production dozens of close-enough allusions to the F-word. The gag quickly grows old. The second joke comes in many forms, but it’s basically the same formula over and over: Greg’s social embarrassment, which is propelled not only by his own insecurities, but by his awful girlfriend Pam who demonstrates a total lack of compassion for Greg’s increasing outsider status. The circumstances are worsened by the lies she’s told her parents to keep the truth about living in sin with Greg a secret, and her necessity for her parents’ approval of Greg. She continues to put Greg in impossibly humiliating situations, leaving him to look rude or offensive or uncomfortable. But he’s no better, lying whenever he can to gain Jack’s approval; of course, his lies are found out and it only makes matters worse.

Watching this unfold is a grueling if repetitive experience, not only in terms of content, but in structure. A joke begins when some embarrassing truth about Greg is revealed to the audience. Greg attempts to haphazardly cover it up, which proves amusing to a viewer watching Stiller scramble. Then there’s an “uh-oh” moment when Jack discovers Greg’s lie, and finally the squirm-inducing outcome when Jack, and thus everyone else, confronts Greg’s lie and questions “What were you thinking, Focker?!” Once or twice, this gag structure proves hilarious, as when Greg claims to have milked a cat to avoid admitting why he pretended to read a breast pump article. Other times, you can feel the filmmakers beating their comedic hammer over your head—like the whole family being covered by the brown slop from the sewage-covered lawn, for instance. Such examples are endless.

The movie is at its best when De Niro uses his authority both as an acting legend and Pam’s father to intimidate Greg with subtle jabs. Fresh off Analyze This, another movie where De Niro gives a self-parodying performance, the actor proves his knack for comedy by playing it straight. In those pokerfaced moments when Jack questions Greg about why he doesn’t like cats or gives him a lie detector test “just for fun”, De Niro’s willingness to lampoon his own clout has never been funnier. Stiller plays his typical ‘neurotic guy’ persona, jacked up to emasculated extremes as he defends his contentment with being a male nurse. Owen Wilson has a riotous cameo as Pam’s faultless ex-boyfriend, whose wealth and success and artistry dwarf Greg in comparison.

As the situation grows absurdly out of control, the overprotective father routine becomes cartoonish and borders on tiring. Certainly it crosses that border in the sequels, when, after resolving their issues at the end of this movie, Greg and Jack still butt heads in a battle for approval. But for this first entry in what is now a franchise, the antics give considerable laughs.  Even the music is funny, as Roach employs Randy Newman’s relevant lyrics in “A Fool in Love” to amusing effect. Meet the Parents may not demand repeat viewings—a number of the jokes are based in shock humor, therefore don’t last beyond their first exposure—but that first time, it’s an incredibly funny studio comedy.