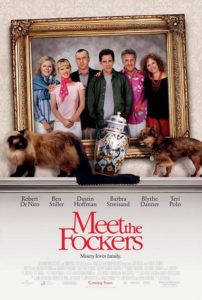 Meet the Fockers achieves your typical Hollywood sequel with jealous dedication to triviality from director Jay Roach (Austin Powers, and its sequels), who shamelessly carbon copies jokes and plot structure from its predecessor. Respectable celebrities are asked to behave in base ways, which serves as humor, and audiences are asked to shut off their brains for another dose of the same shtick. It’s all very predictable, and with every second the viewer suspects the only reason anyone signed onto the project was the enormous paycheck they no doubt received.

After earning the trust of his soon-to-be father-in-law Jack Byrnes (Robert De Niro) in Meet the Parents, Greg Focker (Ben Stiller) has been “firmly” situated in the Byrnes family Circle of Trust when the sequel opens, yet Jack still treats him with no more consideration than a stranger. Greg’s fiancée Pam (Teri Polo) remains unsympathetic, and everyone onscreen remains unwilling to put Jack in his place, given his hyper-paterfamilias status and sordid history with the CIA. When Greg and Pam plan a visit to his parents in Florida to celebrate their engagement, Jack and his generic housewife Dina (Blythe Danner) transport everyone in his new Winnebago-cum-traveling spy command center, which is ultimately used for background and DNA checks on family members he doesn’t trust. Extending his metaphor, Jack searches for chinks in the chain of his familial Circle of Trust.

Accordingly, Jack’s suspicions settle on Greg once more, but also Bernie Focker (Dustin Hoffman) and Roz Focker (Barbara Streisand), he a stay-at-home dad, she a senior sex therapist—both facts that Greg attempts to keep from Jack (but of course doesn’t) to save himself from certain embarrassment. Physically affectionate and wholly supportive of Greg’s underachieving early years, his parents serve as polar opposites to the Byrneses, therefore feel no less cartoonishly constructed. Add to the situation Jack’s obsessive behavior over his other daughter’s infant child, dubbed ‘Baby Jack’, and the antics know no bounds.

Rehashing in a way only the worst sequels do, the movie’s first five minutes serve as a review of jokes from Meet the Parents: Greg’s masculine prowess comes into question as a male nurse; Jack teaches his grandson the sign for “I’m watching you”, which he summarily mimics to Greg; the horn on Jack’s mobile home rings the theme to “Puff the Magic Dragon”; Jack continues to use “Focker” like the F-word. The examples are endless. Writers Jim Herzfeld and John Hamburg spend more time reflecting on the hilarity of the first movie than trying to make the second worthwhile on its own. Only Hoffman and Streisand feel like they’re bringing new material to the established humor, which indeed is a sad admission.

It becomes apparent when watching Meet the Fockers that the filmmakers sat down and brainstormed about what absurdities they could convince respectable actors to say and do: Robert De Niro wears a rubber breast to feed his grandson; Dustin Hoffman’s character seems scatologically obsessed; Barbara Streisand talks dirty whenever possible. It’s all very obvious and forced in terms of story (not that one exists here) and humor. And such behavior distances the viewer from any involvement in the story, all for the sake of exaggerated laughs. By the time Jack shoots Greg in the neck with truth serum, the viewer has thrown out any hope of practical laughs, which at least were believable exaggerations of socially awkward situations in the first movie.

When in doubt, Roach cuts to Baby Jack laughing (or swearing) just to underscore the brand of humor employed by the movie (i.e. childish). He also uses the dreaded “animal reaction shot” with Jack’s toilet-flushing cat and Bernie’s leg-humping dog. Combine these comedic clichés with the movie’s abundance of literal toilet humor (most involving Bernie’s open discussions of bowel movements and his house’s plumbing issues) and the comedic range is nil, and it runs on and on for nearly two full hours—far too long for this brand of dribble. All those hilarious reversals and psychological games from Meet the Parents have been replaced by potty humor, leaving Meet the Fockers ripe enough for flushing.