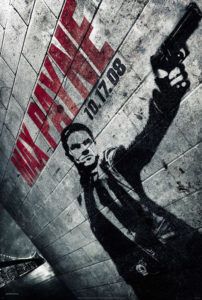 Everyone says not to mess with the title character in Max Payne. Played by a perpetually glowering Mark Wahlberg, Payne is an ex-detective whose wife and child were murdered years ago. He’s now reduced to filing unsolvable cases at police headquarters. “Remember when you were a kid and you’d hold your breath when you run past a grave yard,” a fellow officer warns another, “leave that man alone.” Could Payne have some dark (potentially supernatural) secret, making him more dead than alive, and thus more apt to inflict brutal revenge on those that have done him wrong? Not likely, though we follow that belief for about half the movie.

Based on the popular videogame, which I’ve never played, this adaptation by director John Moore looks like someone watched Sin City and Constantine too many times. Washed of most of its color, bright red flashes break up the over-stylized pale blue saturation of this neo-noir. The always-precipitating New York City backdrop, which at any moment is being drenched with rain or snowfall, creates a familiar atmosphere. But Moore is used to working with familiar surroundings, sitting in the director’s chair on the recent remakes of Fight of the Phoenix and The Omen.

Populating the movie, the women (including Mila Kunis and Olga Kurylenko) all have pouty lips, walk like runway models, and carry automatic weapons; the men are so macho they could probably wrestle a bear and win. Max Payne is the toughest of them all, however. He might even be Superman. At one point, he’s rummaging through the office of his dead partner in whose murder case he is a suspect. Fellow cops outside are trying to break down the door, and when they do, Payne is gone. There’s no trace but an open window. Where did he go? Did he fly back to the Fortress of Solitude? Or is this just one of the uncountable stupid events in the movie?

The plot involves cover-ups by a pharmaceutical corporation, government conspiracy, ancient battles between heaven and hell, Norse mythology, hallucinatory narcotics, and, I suppose, Max Payne settling scores with those criminals who murdered his family. But the latter is only tacked-on to purvey the imagery associated with the former themes. Moore would rather spend his time shooting looming figures with demonesque wings that are always flying-in from behind, only identified by their massive shadows or glowing eyes. Are these angels, or demons maybe? By the time you find out what these creatures are, you’ve already been in the movie too long to get your money back, so your disappointment will not be avenged.

Even for a videogame movie, the action is surprisingly dull. With Hitman and Resident Evil, at least viewers could lose themselves in the mindless action. Moore arranges gunfights in one of two alternating and equally mind-numbing ways: 1) Hyperactive violence shot at an unintelligibly breakneck pace, or 2) Achingly time-consuming slow-motion gunfire, which, in the expanse of a single bullet firing, you can check your watch, run to the restroom, purchase some Buncha Crunch, and still return without the shell having hit its target.

What is Mark Wahlberg doing in this movie, you might wonder? Two years ago he received an Oscar nomination for The Departed. Since then, he’s involved himself in dreck like Shooter and The Happening with seemingly no self-regard. What is he punishing himself (and us) for? His talents are best-reserved for one-note roles, preferably those without challenging dialogue. Here, the actor narrates cliché lines without an ounce of passion or personality. He beats suspects, spouts cringe-worthy toughguy lines, and remains at the ready to shoot anybody for any reason. Wahlberg is by no means a great actor, but he’s popular, and enough of a money-maker to involve himself in better material. What are you waiting for, Mr. Wahlberg? When are you going to become the star you have the potential to be?

Not even those looking for gratuitous violence are allowed their just desserts, since 20th Century Fox cut such material to meet PG-13 requirements (nevertheless, what’s left is still extremely violent). Moore stated earlier this year that Max Payne would be “hard R,” but no doubt some studio exec wanted teen gamers to fill theater seats, and then, in a few short months, purchase the obligatory “Unrated” DVD with all the blood and guts and nudity added back in. Shame there won’t be an alternate version shot from a different script, by a better director, and with a star that can project emotion…