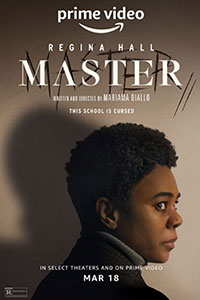 Master isn’t a horror movie in the traditional sense. The first feature by writer-director Mariama Diallo is about race in America, which is its own horror story. That distinction is bound to frustrate viewers who have expectations for something more conventional. Even so, Diallo wields horror tropes to make an effective commentary about institutionalized racism. The story follows three women of color at the prestigious Ancaster College in New England: Gail Bishop (Regina Hall), a professor who becomes the first Black headmaster of Ancaster; Jasmine (Zoe Renee), a freshman who discovers she’s one of Ancaster’s only Black students; and Liv (Amber Gray), a professor whose tenure is under review. Diallo explores how these characters uncover the disturbing traces of racism, past and present, embedded into the college’s history. Although it’s not as playful or accessible as other films that have blended racial commentary and horror, Diallo’s control of the foreboding mood turns Master into an appropriately chilling examination of America’s past.

The film begins like typical supernatural horror fare. Jasmine arrives at school and learns about a local legend involving Margaret Millett, a Salem-era woman who was accused of witchcraft and then hanged. Margaret’s evil spirit has haunted Ancaster ever since. Purportedly, she targets the students in room 302—Jasmine’s room—and drags them down to hell at 3:33 a.m. Diallo sets the stage with dark hallways and flickering overhead lights, suggesting a haunted campus. Jasmine sees contorted faces on paintings and dreams of a cloaked figure scratching her or putting a noose around her neck. But the superstitions also affect Gail, who finds maggots infesting the headmaster’s home. Cinematographer Charlotte Hornsby shoots the proceedings with frightful atmospherics, glimpsing phantom hands and subtle flashes of ominous figures in the dark—among them a local Puritan group scurrying about in the woods. Diallo and Hornsby create an aesthetic that recalls Kubrickian shots of long hallways in The Shining (1980) or zoom-outs from old portraiture in Barry Lyndon (1975), lending a familiar austerity to the visuals.

Despite such creepy details, the microaggressions pervaded by Jasmine’s classmates and Gail’s faculty prove worse. Jasmine’s predominantly white peers have a devious way of disregarding or diminishing her, calling attention to her race, or singing racially charged lyrics in her direction at a party. Although Jasmine brushes off these incidents, she soon learns with some research that the first student of color at Ancaster experienced the same persecution before meeting a grim fate. Before long, these vague slights become more aggressive when someone carves “Leave” on her door and places a noose on the knob. Gail experiences something similar but less direct: she finds evidence of racist objects, photos, and documents hidden away in her attic, hinting at the college’s unsavory past. Meanwhile, Jasmine challenges Liv over a failing grade on a paper about a racially informed reading of The Scarlet Letter, and Liv’s motivations become suspect. As these details build, Diallo expertly creates a sense of dread over the secrets that fester beneath the surface—a notion literalized by the maggots in Gail’s headmaster abode.

Diallo’s treatment of these details is less concerned about story logic than instilling an oppressive, unsettling tone. Several scenes feel cut down abruptly to achieve a particular feeling, though they sacrifice reason for an aura of fear. Take a sequence where a figure hooded in black appears to Jasmine one night. Jasmine suddenly runs, screaming, and presumably, a chase ensues. But we never see the result of that chase. The scene cuts away and, later, we discover Jasmine escaped. Master seems to unfold in a half-dream state, where it remains unclear whether these specters are literal or figurative. However, that seems to be Diallo’s point—there’s no need for stories about witches and ghosts. It’s scary enough that the people who ran the college in the past are the same sort of elitist and privileged families that comprise the faculty today, and they pass their views down from one generation to the next.

With its ironic title, Master seems to remind its audience that the white establishment is deeply ingrained after its long history of privilege and racism, and that influence either leaves remnants or continues to hide just beneath the surface of a seemingly inclusive face of white liberalism. To what degree, Diallo asks, should people of color strive to become a part of that establishment? Are these problems that can be corrected from within? Diallo doesn’t offer clear answers, but her script explores notions of racial discourse in higher education, the pressures of Black excellence, racial passing, and white liberals’ “comfort” with race in thought-provoking ways. It’s not what you would call subtle in its application of these ideas; however, it explores them in a way bound to incite conversation afterward.

Thanks to two restrained and aching performances by Hall and Renee, Diallo’s film manages to be complex. However, her writing and narrative tend to feel didactic, preaching to the viewer more than creating an investment in a story. There’s no demon to exercise like in His House (2020), no institutional cult of conspirators to dethrone like in Sophia Takal’s Black Christmas (2019). Instead, Master feels like an intellectualized treatise on the subject of race in America, using the guise of a horror movie to make its argument. It’s dissatisfying, in the sense that the film fails to create much suspense or produce many scares, or provide a conventional resolution. But Diallo does an excellent job of placing the viewer into Gail and Jasmine’s individual subjectivity, forcing us to experience racially motivated negativity and hostility that amount to everyday interactions.