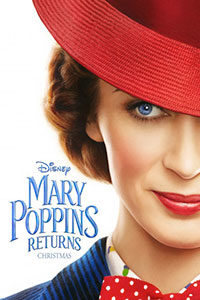 It’s with mild reluctance that I admit this: I don’t love Disney’s Mary Poppins, though countless viewers, both those who grew up with the film or just recently discovered it, remain swept away by its delights. Critics both then and now are quick to describe the 1964 musical, based on the popular series of books by P.L. Travers, using that famous Poppins line, “Practically perfect in every way.” However, in spite of its frequent glimmers, I find it to be a drawn-out product of the post-classical Hollywood era, where the studios sought to compete with the overriding popularity of television by producing bloated runtimes, elaborate production design, and larger-than-life images projected onto large format screens. Such formal requirements make Mary Poppins a lumbering affair, where entire set-pieces exist only to cram in yet another musical number, no matter how tangential it may seem, into the rudimentary story about reconnecting the family unit (disjointed in part because the mother was more interested in her pesky feminist rallies than taking care of the home). None of this is to suggest the original film is anything less than enchanted escapism. It’s loaded with individual moments of magic that transport the viewer into Disney’s lighthearted and sentimental world, even if a calculation of the proceedings breaks down to two hours of frivolity and twenty minutes of story.

Similarly, Mary Poppins Returns arrives in an era in which viewers would rather watch content on small devices than visit the multiplex. In the 1960s, people stayed home to watch The Andy Griffith Show, Gilligan’s Island, and Gunsmoke on their small black-and-white televisions—and yet, people came out in droves to see Mary Poppins. Today, thousands of movies and long-form series are streamed onto smartphones, tablets, laptops and, on occasion, smart TVs. So it’s with a historical parallel that the entertainment industry must ask a similar question as it did in the 1960s—How do we get people into theaters?—and, at least in this instance, they’ve answered it the same way: An escapist musical. Like its predecessor, Mary Poppins Returns is a disjointed and episodic follow-up of substantial length (just ten minutes shorter than the 1964 version). The belated sequel features a bevy of musical numbers and random asides, and its story amounts to about a half-hour of material. It’s an airy, often pointless, and exceedingly enjoyable time at the movie theater.

Leaning hard on our nostalgia for the 1964 film, director Rob Marshall and screenwriter David Magee create a painstaking throwback that, aside from the occasional presence of computer-generated effects, looks and feels like a 1960s production. The opening titles play against, simply, oil paintings of the film’s setting: London during the Great Depression. The music and songs by Scott Wittman and Marc Shaiman adopt the sounds of 1960s showpieces like the original Mary Poppins; or perhaps My Fair Lady, which opened the same year; or even 1965’s The Sound of Music. Rather than nostalgia for the 1930s setting, it’s nostalgia for the Hollywood era in which the original film was made. The city’s cobblestone streets and building façades look like soundstages and not CGI confections (which is not to suggest this production is CGI-free). The whimsical dance numbers carry on for several minutes at a time, placing the fanciful ahead of the story. There’s even a wonderful mid-film sequence in which the characters enter a hand-drawn animated world and interact with cartoon characters who look as though they belong in Disney’s The Jungle Book (1967) or Robin Hood (1973). There’s an easygoing pleasure throughout Mary Poppins Returns that is, alas, uncommon in today’s family entertainment. 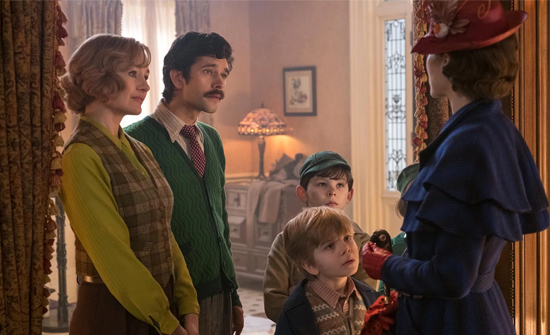 Although Travers wrote eight Mary Poppins books, Magee’s script is an original work based on a story he conceived with Marshall and John DeLuca. The tale finds siblings Michael (Ben Whishaw, whose mustache is never not distracting) and Jane Banks (Emily Mortimer, cheery) all grown up. She’s a labor organizer and ever helpful to her brother, while he’s a widower struggling to support his three unruly children (Pixie Davies, Nathanael Saleh, Joel Dawson) with nothing but a hapless maid (Julie Walters). When his evil bank manager (Colin Firth), also his boss, schemes to repossess Michael’s home—the same one on Cherry Tree Lane where he and Jane grew up—Michael finds himself in dire straights. Enter the miraculous Mary Poppins (Emily Blunt), who floats down from who-knows-where-in-the-sky to save the day. Michael and Jane remember her, of course, but they now think their childhood adventures of dancing with penguins and on rooftops with Poppins were childish fantasies. (Funny how they never ask why she hasn’t aged a day in two decades or more.) The new Banks children experience their own adventures under Mary Poppins’ guidance, including elaborate musical numbers, sometimes animated. Although, like before, Mary Poppins has arrived not only for the children but to remind the father how to be a child again.

It’s with great pleasure that I report on the surprisingly excellent quality of the songs in Mary Poppins Returns. From the first, “(Underneath the) Lovely London Sky” performed by Lin-Manuel Miranda’s cockney leerie (lamplighter) named Jack, the music sweeps us away into the 1960s era from which this film was born, at least in concept. I was particularly taken with “The Royal Doulton Music Hall” and “A Cover is Not the Book”—two vaudeville numbers that unfold in a hand-drawn, sometimes tastefully bawdy cartoon world, filled with anthropomorphized creatures in period-appropriate formal dress. But the best song called “Can You Imagine That?” is the catchiest of the bunch, and its melody has been ingrained into Shaiman’s score, while its lyrics resonate with the film’s essential theme: “Perhaps we’ve learned when day is done/Some stuff and nonsense could be fun.” Unfortunately, the song is staged against a computerized, underwater bathtub world that, while more entertaining than this year’s Aquaman, nonetheless feels far removed from the rest of the film’s nostalgic aesthetic.

To be sure, both in form and content, Mary Poppins Returns is rooted in the past, as most Disney productions are these days. The House of Mouse has folded in on itself, remaking its animated classics from Alice in Wonderland to The Lion King into so-called live-action productions, much to the delight of the box-office and chagrin of purists. Since Mary Poppins Returns is not a remake in the same manner, it feels less like a shameless cash grab. However, its story follows the same story beats as its predecessor (Mr. Banks, inevitably, remembers to embrace his inner child, thwarts the cruel bankers, and tightens the bond amid his family). The sequel re-envisions the same themes for a new generation while supplying those familiar with the original a healthy reminder of why it has endured. (Note the cameo appearance of a still-spry Dick Van Dyke as the bank owner, whose brief jig cannot help but conjure a smile.) It may as well be a remake, except it’s not—and yet, the film fits nicely into Disney’s recent trend of exploiting its own brands.

Mary Poppins Returns carries on for too long, and at least one or two songs should have been cut. There’s also an entire subplot about a broken, beloved family bowl that takes the film into a long and unnecessary detour—though the subplot is frustratingly inconsequential, it also features some of the best songs and an appearance by Meryl Streep by way of Marlene Dietrich in Touch of Evil (1958). The production often looks gorgeous, as cinematographer Dion Beebe, who shot Into the Woods (2014) for Marshall and Disney, captures a textured atmosphere, and production designer John Myhre recreates the feeling of the original, CGI skies notwithstanding. Best of all, Emily Blunt, who is perhaps more mannered and rigid than Julie Andrews, manages to make Poppins her own. Though much of the runtime is spent on nonsense—cartoon carriages, dancing leeries, ridiculous rhymes, talking umbrellas, animated animals, and flying balloons—that brand of pointlessness is the point. And so, ultimately, I feel the same way about both Mary Poppins and its sequel, in that both are frivolous, certainly silly, occasionally imbalanced, definitely overlong, and somewhat meaningless fun.