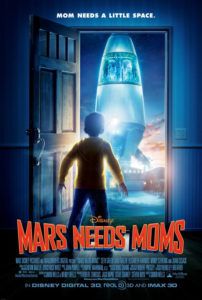 Walt Disney’s Mars Needs Moms is an unsightly experience of motion-capture computer animation comprised of far too many technological “advances”, such as optional 3-D and IMAX presentations. Visually off-putting, the movie ventures deep into the eerie recesses of the Uncanny Valley thanks to producer Robert Zemeckis, whose own motion-capture creep-outs The Polar Express and A Christmas Carol remind us why photo-realistic animation is overrated outside of Avatar. You might ask what the filmmakers are compensating for with such bells and whistles. Turns out it’s the screenplay, adapted from Berkeley Breathed’s children’s book by director-husband Simon Wells and co-writer-wife Wendy Wells, which contains some sickeningly outdated notions about gender roles and modern parenting.

Just after wishing he didn’t have a mother, bratty 9-year-old Milo (voice Seth Green) watches Martians abduct his mom (voice of Joan Cusack), and hitches a ride on their rocket to save her. It seems that every twenty years-or-so on Mars, children sprout from the ground and are raised by nanny-bots that last only one generation. Rather than improve their nanny-bots to last or, you know, raise the children themselves, Martian females, led by the despotic Supervisor (voice of Mindy Sterling), abduct one human mother, steal her parenting skills via massive zap gun, and reprogram new nanny-bots with her mothering powers. Perpetuating this plan is apparently the sole concern on Mars, a society divided between an all-female elite and the monkey-like Martian males, who are banished to an underground of mountainous garbage heaps. Milo teams with chubby human computer geek Gribble (the obnoxious Dan Fogler), who’s on Mars for reasons not worth getting into, and a rebellious Martian female named Ki (voice of Elisabeth Harnois), to save his mom and return Mars to a society of nuclear families.

With recent concerns from anti-smoking activists about the genre-specific cigar puffs in the PG-rated animated Western Rango, overprotective parents should be more troubled by the archaic gender politics advocated here. In several speeches from Milo, he attributes mothers to the duties of housework, laundry, and food preparation, whereas dear old Dad is away on business. Such parental assignments seem more attuned to 1950s sensibilities, and perhaps that’s when the story should have been set. Alas, in a modern setting, these roles are insulting. Furthermore, female Martians are little more than hips, shaped like upside-down tuning forks. And when Milo sees a wrinkled, elder Martian woman, he quips “Yuck, Mars needs Botox!” When an inspired film like Rango comes along and receives protests for one scene of smoking, it’s a travesty that no one steps up against Mars Needs Moms for suggesting that women should remain homemakers and stay perpetually youthful, even if it means a few trips to the plastic surgeon.

And then there’s the motion-capture animation, which composes dead-eyed characters whose mouths never look quite right. Ironically, the wooden animation and darkening 3-D remove the detail that they’re supposed to improve. The humans appear almost-but-not-quite identical to their voice actors, as though their visual souls have departed and we’re left with an unsettling, inexpressive shell. Despite almost universal complaints about this from critics and audiences after his previous computer-animated efforts, Zemeckis still hasn’t corrected the issue, leaving viewers scarred with nightmares of almost-real humans. And though the use of phosphorescent colors on Ki’s graffiti paints may be inspired, the crusty browns used to create the surface of the Red Planet are unattractive and uninspiring, which is just the opposite of what an escapist adventure to Mars should be.

Breathed’s book had the right idea with its cartoonish characters and borrowing his title from the cornball Atomic Era TV-movie Mars Needs Women (1967), but nothing about this adaptation supports those choices. Any hope of wonder or satiric humor is prevented by the dull, “realistic” animation and overflow of plot elements that never congeal. Simon Wells, the great-grandson of legendary author H.G. Wells, also made the underwhelming remake of The Time Machine in 2002, and here his movie employs the same wanting grandeur. Had he insisted on a more stylized work that mocked instead of wholeheartedly embraced the story’s antiquated notions of family and gender roles, then Mars Needs Moms might not have been the complete failure it proves to be. Instead, here’s an animated movie that, through its conceit, will leave children with the impression that their single father or gay parents are inadequate. And if your family does happen to have both a mother and father, then you’d better hope your parental roles have Mom as the good-looking homemaker and Dad as the breadwinner, otherwise you’ll have some explaining to do. But if you’re any kind of parent, you’ll just take the kids to see Rango and explain that smoking is bad, rather than have to explain why daddy does the cooking and mommy has wrinkles.