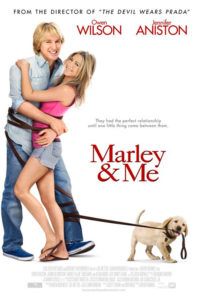 Marley & Me contains some enlightening philosophy on the simple delight of owning a dog. Summing up the experience, the film relates how if you’re willing to give love to your dog, love will be returned unconditionally. Audiences should walk away from this movie wiping away their tears to be sure, reflecting on their love for Fido or Ralph or Queequeg—whatever the name of the pooch waiting at home may be. Indeed, dogs the world over are enjoying many a belly rub when moviegoers return from this one.

But if Marley, the title’s yellow Labrador Retriever, were your dog, you might not think him so cute, rather a demon seed. This “clearance puppy” eats everything from furniture to jewelry, finds his bathroom just about anywhere, can barely move without breaking into a sprint, and seems prone to destroying the intended outcome of whatever the situation may be. Marley is played by several dogs, each as cute as can be, as the movie spans his entire life. But the effect is seamless in rendering a personality as tangible as a dog’s gets this side of the talking animals in Disney animation.

Purchased by newspaper columnist John Grogan (Owen Wilson) as a familial appetizer for his new wife Jenny (Jennifer Aniston), Marley is brought to their Florida home and let loose, barely contained by the leash that only occasionally holds him back. The dog is spirited and decidedly untrainable, though that doesn’t stop John and Jenny from trying to teach him with a frustrated instructor (Kathleen Turner). Soon enough they accept the fact that Marley will remain wild and out of control, and having an unpredictable element in their lives keeps the otherwise sitcomish events therein interesting.

And though I would like to report the film version of John Grogan’s best-selling autobiographical story about a man and his dog is as Marley-centric as the book, alas, I cannot. Much of the film concerns John’s unhappiness with his column, where he finds himself writing about Marley’s latest misadventures and other blithe topics enjoyed by his affable editor (Alan Arkin), versus his aspirations to become a serious reporter like his friend Sebastian (Eric Dane). Jenny struggles with the hectic lifestyle of a stay-at-home-mom, though she used to be a journalist too. And babies keep coming and coming, making the Grogan homestead an active place. Few of these events are described from Marley’s perspective, or rather, how Marley helped shaped them. The dog is just another participant adding some much-needed cuteness into the scene. Perhaps writers Scott Frank (Minority Report, The Lookout) and Don Roos (Single White Female) lack the extreme schmaltz as adaptors of Grogan’s novel to allow every scene to involve the dog. After all, based on their résumés, they’re more suited for heavy thrillers than light doggie fare.

Some audiences might complain about being misled by the film’s cheery advisements, which present a family dog romp—something like Beethoven, but cuter and no Charles Grodin. Not so. Director David Frankel adapts Grogan’s book with the emotionalized message intact, supplying an abundance of unabashedly manipulative, albeit successful sentimentalism. But the story is more comparable to Old Yeller, complete with the tragic ending every dog owner must face. This is no reason to avoid the picture, however. Just a hearty dose of reality. (Note: Some parents have shied away from taking their children on this basis. If that’s your logic, why allow a dog into your family if you’re so worried about your child learning about death? It’s going to happen eventually, folks, so why not expose them to the trauma in Hollywood form, thus they’ll know what to expect when the real thing comes.)

But no matter, Marley & Me is a movie for those of us who get sucked into the Animal Planet’s marathon showings of the Puppy Bowl and check the Shiba Inu Puppy Cam for a daily moment of joy. The laughs are silly pleasures involving dog clichés that every pet owner has experienced a dozen times or more. I suppose cat people will stay home. Fair enough. The production is light, filled with big love and sobbing cries, two talented stars that sufficiently play their roles, and plenty of awww moments the movie makes sure to replay during the end credits. What’s not to enjoy?