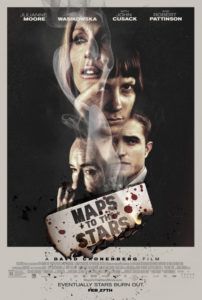 In Maps to the Stars, a satiric portrait of Hollywood by David Cronenberg, the Canadian filmmaker and industry recluse takes a scalpel to Tinseltown and leaves its guts piled on the floor. Then he douses them in gasoline and sets them ablaze. Drawn from a screenplay by novelist Bruce Wagner, Cronenberg’s long-in-development film is both funny and horrific in the same way Billy Wilder’s Sunset Boulevard, Robert Altman’s The Player, or David Lynch’s Mulholland Drive each have a pitch-black comic pulse to them. Wagner’s script deems Hollywood a place of incestuous overtones, absurd therapies, celebrities working one program or another, and ghostly apparitions. Everyone has a pitch, everyone has an angle, and switching to the Church of Scientology might just be a good career move. But once these horrible people start to resemble celebrity gossip headlines a little too closely, the viewer realizes that Cronenberg and Wagner have tapped into truth rather than acerbic cynicism.

Starry, eerily kaleidoscopic atlas titles give way to Cronenberg’s hushed world of the film, an antiseptic to industry commercialism with a strain of “Burn Hollywood Burn” running underneath. The film settles on two dysfunctional families in Los Angeles, although “dysfunctional” may not be potent enough a word. Haunted by forgotten scandals and ghostly apparitions, middle-aged actress Havana Segrand (Julianne Moore) struggles to remain significant in a culture obsessed with youth. Her more talented “cult figure” mother Clarice Taggart (Sarah Gadon) is fondly remembered, having died in a fire in the 1970s at the height of her popularity. Havana, now aging and gradually losing relevance, lives in her mother’s shadow and sees herself fading—and Clarice’s ghost visits to remind her of this fact. What’s more, Havana is up for a role in which she would play her mother, but Moore’s nervy, desperate-voiced character cannot seem to get her would-be director on the phone.

Elsewhere, Agatha (Mia Wasikowska) arrives in Beverly Hills by bus and, through an internet acquaintance (Carrie Fisher, playing herself), lands a job as Havana’s personal assistant. But there’s something off-putting about Agatha; she covers burn scars on her arms with long leather gloves, and her hair hides the scars on her face just so. Already the fire connection builds associations, but these are largely intangible coincidences—much like the mere presence of Fisher, who famously lived under the thumb of Hollywood excess as the child of Eddie Fisher and Debbie Reynolds. Another coincidence, or perhaps intended by Cronenberg, is Agatha’s limo driver and soon boyfriend, played by Robert Pattinson. Pattinson spent most of his time in a limo for Cronenberg’s last film, Cosmopolis. But there are more than strange associations behind Agatha’s presence, which we learn from the awful, decadent Weiss family.

Spoiled rotten and downright sadistic, 13-year-old actor Benjie Weiss (Evan Bird) spent the summer getting over drugs, and now his all-encouraging mother Cristina (Olivia Williams) pushes for him to star in “Bad Babysitter 2,” the sequel to Benjie’s box-office hit. The young star’s selfish Bieber-esque attitude and sociopathic tendencies manifest in a violently defended ego and penchant for red Skittles. Like Havana, Benjie too starts seeing ghosts (or perhaps they’re hallucinations), though his are of a dead fan. Then there’s his father, Stafford (John Cusack), a pseudo-psychic celebrity therapist and self-help spiritualist. Stafford happens to be married to his sister, while he and Cristina’s two children, which includes the estranged and mentally unstable daughter Agatha, have a similar incestuous bond. Years ago, Agatha tried to drug Benjie, and then she lit their former house on fire. Her presence in Hollywood again has Stafford and Cristina rattled with fear and self-reflection.

As Hollywood has demonstrated time and again, it loves films about itself and remains preoccupied with its own past. (Just consider some recent Oscar winners: The Artist, Hugo, and Birdman.) But when Maps to the Stars played at various film festivals from Toronto to Cannes, studios kept their distance. The distributors at Focus World, the arthouse subdivision of Focus Features, barely released the film, relegating it to limited theaters and a larger push on VOD vendors. Indeed, Cronenberg’s film was not meant for Hollywood or even wide release. Any film where an actress jumps and sings for joy at the death of a child, because it means she gets the role she wanted, doesn’t want to be loved by Hollywood. That reference is to Moore’s character, a role that earned her the Best Actress prize at Cannes, quite deservingly so. Havana is beyond self-absorbed and, much like many of the characters in the film, just terrible. Take when she asks about Agatha’s sex life while she noisily sits on the toilet, forcing Agatha to listen, and then later beds Agatha’s boyfriend in the back of his limo for no reason at all except to feel sexy. (She’s finally beaten to death with her own Oscar-like award.)

By the end, Cronenberg has somehow made Agatha, the most schizophrenic character onscreen, seem like the most sympathetic character in the film when compared to the perversity of human garbage floundering in this Hollywood freak show. Celebrity grotesques such as these are nothing new and certainly familiar within the realm of Hollywood satires. But Cronenberg gives the material a fresh treatment from his unique perspective, applying a layer of unease to every scene. Although a late-film display of bad CGI manages to spoil an otherwise fiery moment, the director’s regular cinematographer Peter Suschitzky, production designer Carol Spier, and composer Howard Shore lend their unique talents to the project, giving Maps to the Stars that decidedly Cronenbergian feel. Themes of incest and fire notwithstanding, Wagner’s bitter comic edge prevails and puts forth an incurable condition for these hopeless characters. And, just as Cronenberg remarked on our cultural obsessions in Videodrome and A History of Violence, the characters in Maps to the Stars reveal the idols of a doomed America.