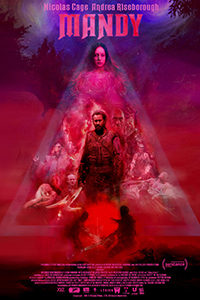 In Mandy, every moment belongs to a nightmare of red floodlighting, carefully arranged shots, a sense of melancholy, and bloody combat with what appears to be Klingon weaponry. Even the tonal control scenes that establish what normality looks like feel bizarre and other-worldly. Perhaps the most normal thing that occurs is not normal at all. It’s a brief moment between Red Miller, a logger played by Nicolas Cage, and his lady friend Mandy (Andrea Riseborough), a talented artist who works at a gas station. Red approaches her with a knock-knock joke. Mandy indulges Red, “Who’s there?” Red replies flatly, in Cage’s breathy voice, “Erik Estrada.” Mandy takes the bait, “Erik Estrada who?” Red answers, “Erik Estrada, from CHiPS,” which is less a punchline than a further explanation about the knocker. The moment passes without laughter or consequence. Maybe it’s telling that Mandy takes place in 1983, the same year that the popular NBC show about motorcycle police went off the air. Maybe that’s a pointless detail. There seem to be a lot of pointless details in director Panos Cosmatos’ film, a work of heavy metal surrealism that, in the short time since its debut at the 2018 Sundance Film Festival, has acquired a cult following devoted to its strangeness, its strain of psychedelia, and the sheer outlandishness of its violence. Above all, Cosmatos has given Cage a role that, with equal parts irony and genuine showmanship, achieves some measure of greatness.

Son of Swedish sculptor Birgitta Ljungberg-Cosmatos and Hollywood director George P. Cosmatos (Cobra, Tombstone), the Canadian-born Panos Cosmatos has made an impression with just two feature films. His experimental, pastiche style derives influence from dozens of sources, from Stanley Kubrick to David Lynch to Alain Resnais, as well as the 1980s setting in which he grew up on horror movies and heavy metal music. Elsewhere, his trancelike approach bears an intentionality in his use of long passages that linger on visuals rather than their substance. He has an evident eye for striking compositions, though connecting to his material may prove to be a challenge for those sober or lacking a capacity for abstract thought. It might even be tempting to call Cosmatos’ approach one of time-images in the Deleuzian sense, in that the director means to invite his viewer to consider the meaning of time itself within particularly ruminative scenes. But the presence of long, stylishly composed, boldly colored shots comes without the import of other filmmakers versed in time-imagery.

The characters in his debut, Beyond the Black Rainbow, also set in the Reagan-inflected backdrop of 1983, inhabited a series of geometric rooms and engaged in plodding dialogue to little consequence. The story about a crazed scientist bent on advancing the human species through psychedelic drugs, and his imprisoned telepathic patient desperate to escape, produces an experience that caters to a cult audience through its familiar application of form and bizarro performances. Aside from its effective dreamlike atmosphere, the individual elements of Cosmatos’ technique—the cinematography, score, pacing, use of color, and mannerist acting—each have a deliberate quality, and each can be singled out as evidence of the director’s control over his craft. The cohesion and meaning of these collective elements are less impressive, but perhaps that’s intentional, in the same way that surrealists attempt to unlock the power of imagination by engaging the spectator’s unconscious through oddball imagery. 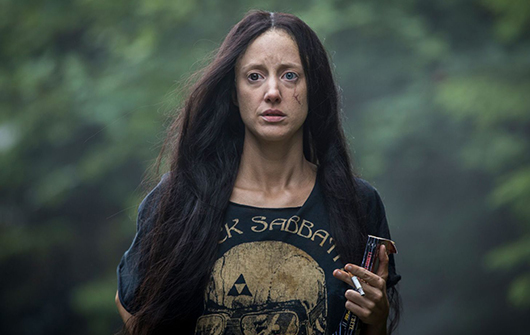 In much the same way as Beyond the Black Rainbow, Cosmatos’ sophomore effort defies any obligation for narrative or dramatic clarity, although it’s easier to sit through than its predecessor. Red and David Bowie-eyed Mandy live somewhere in the Shadow Mountains of California, where they inhabit a secluded home together and spend their nights looking at the stars, talking about their favorite planets, and cracking wise about CHiPS. The first half of Mandy settles the viewer into their routine, while also anticipating their intersection with a cult called “Children of the New Dawn.” Headed by Jeremiah (Linus Roache)—a New Age hippie and Charles Manson figure who says things like, “I possess elucidations you will never know!”—the cult comes in two waves: The first is a band of mortal followers doting on Jeremiah’s every command, including his order to capture Mandy, whom he spies on the road one day and decides in that moment that he wants her. The second wave is called Black Skulls—veritable Hounds of Hell that prove far more devious and grotesque than Jeremiah’s more obviously human disciples. They arrive by motorcycle and resemble the demonic Cenobites from Hellraiser (1987), clad in leather and warped by a nasty strain of LSD. They’re beckoned by Jeremiah’s right-hand man, Brother Swan (Ned Dennehy), who uses the so-called “Horn of Abraxas” to put out the call, at which point Mandy shifts from an eerie mood piece into a blood-soaked fever dream.

After Jeremiah has Mandy burned alive for humiliating him with sexual rejection, he leaves Red for dead, tied up and traumatized. Cage has played the howling revenge monster type more times than I can count, and most of those over-the-top performances have been contained in best-left-forgotten titles like Seeking Justice or Stolen. But in Mandy, Cage’s performance seems unleashed in an exhilarating display of unchecked emotion and Jackson Pollack acting, as though his crazed yuppie from Vampire’s Kiss, unhinged renegade from Wild at Heart, suicidal alcoholic from Leaving Las Vegas, and sheer nuttiness from The Wicker Man were combined into a single force. After downing a bottle of vodka and tearing apart his bathroom out of grief, Red arms himself with weapons that can “cut through bone like a fat kid through a cake,” including the aforementioned Klingon battle-axe he randomly forges in a brief montage. First, he slices his way through the bikers from beyond, leaving his body coated in viscera. But he also becomes an other-worldly force of vengeance when he takes the same substance that transformed the Black Skulls into what they are. (And what are they, exactly?)

Inspired by what seems like a steady diet of mind-altering drugs in the presence of heavy metal album covers, Cosmatos finds an excellent use of Cage’s metatextual persona in a self-aware stroke of casting. By the time Cage engages in a chainsaw fight with one of the Children of the New Dawn, the viewer has either completely given up or has begun to cheer at the ambitious strangeness of it all, thus endearing the material to its target cult audience. Cage often alternates between unintentional badness (in, say, The Sorcerer’s Apprentice) and the occasional alignment between his kind of screen presence and the given material (Bad Lieutenant: Port of Call New Orleans). In the wrong role, Cage exists separate from the rest of the movie, and his inclusion seems out of place and awful. When appropriately cast, he becomes the engine driving everything onscreen. In Mandy, he’s both—he adopts an inherent cult quality by at once distracting us from the proceedings to create a meta-viewing experience in awe of Cage’s audaciousness, while also bonding the audience to Red’s absurdly violent journey. 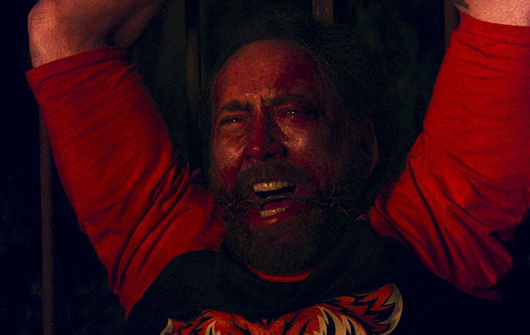 David Lynch already used Cage to a similar end in Wild at Heart, another film that blends a dark fairy tale story with imagery borrowed from its director’s waking dreams. Unlike Lynch, who draws from the inventory of his unconscious and inner conceptions of the American nightmare, Cosmatos seems to engage in the abstract out of a mostly cinematic book of imagery and influence. And regardless of the apparent formal purposefulness of Cosmatos’ approach, there’s a surprising number of disturbing or hilariously uncanny details that seem included for no reason whatsoever, except to be weird—Cage among them. That is, of course, the nature of surrealism, a genre that avoids clear reasoning and resists narrative justifications. Any number of pointless yet fascinatingly uneven details in Mandy can be explained away through surrealist logic, or lack thereof. Still, it remains compelling, and it’s helped along by a dazzling synthesizer score from the late Jóhann Jóhannsson, as well as a few added riffs from Stephen O’Malley, the guitarist from the experimental metal group Sunn O))).

If Cosmatos’ ambitions take their root in surrealist soil as they seem to, then the outcomes of Mandy are not those of emotional catharsis or narrative clarity. Instead, they must exist in the realm of hypnagogia that defies traditional aesthetic objectives. In other words, don’t expect a straightforward plot, deeply felt emotions, or even a sense of reason behind the formal choices throughout. There are several arresting images that, taken on their own merits, echo the type of visuals found in Lynch’s work—and not, as others have written, in the style of Andrei Tarkovsky or Luis Buñuel, whose brand of surrealism was intentionally symbolic and readable. Being Lynchian, Cosmatos creates dream imagery for the sake of its own potency, whereas Tarkovsky and Buñuel used cinematic metaphors to create an intended reaction, both emotional and intellectual.

Watching Mandy, then, is dependent on what the viewer brings to the experience, whether they find this sort of thing spiritual, trippy, or simply base. This is true of any film, of course, but more so in such surreal territory, which depends on personal interpretation, or how the material relates to the viewer’s unconscious. Moreover, its success relies on the viewer’s affinity for Cosmatos’ preoccupations with earlier pop culture. His heavy metal imagery, perverse situations, and 1980s nostalgia bear resemblance to postmodern efforts from Nicolas Winding Refn (Drive), while his descent into psychedelia recalls Gaspar Noé (Enter the Void). Whether the eccentricities or the countless other reference points throughout this languorous and gory film interest you is a question of personal taste, but at two hours, it could stand to drop 15 minutes of those frequent ponderous shots. And then there’s Nicolas Cage’s performance, a demonstration of overacting that aligns perfectly with Cosmatos’ style. Mandy is catered for but not pandering to midnight madness audiences. At times visionary, at other times hypnotic in its emptiness, it isn’t really about anything. But it doesn’t have to be; it’s memorable.

(Editor’s Note: This review was commissioned on Patreon. Thanks for your suggestion, Charlie!)