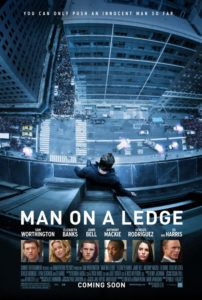 Far-fetched plot devices do their best to distract from the alarming number of clichés prevalent in Man on a Ledge, being about a man who threatens to jump off a building only to distract everyone below from a high-stakes robbery going down across the street. Part heist scenario, part hostage yarn, part cop drama, all of these elements feel halfhearted and eye-rollingly familiar thanks to a messy script by frequent TV-movie writer Pablo F. Fenjves (making his big-screen debut). The scenario builds almost entirely on ideas stolen from better movies, pieced together from moments in Die Hard, Inside Man, and Mission: Impossible in the most obvious ways possible. Director Asger Leth (making both his fiction and Hollywood debut after his 2006 documentary Ghosts of Cite Soleil) oversees an impressive cast, but can’t divert us from the plot holes enough even to make the proceedings mindless fun.

Barely making an attempt to disguise his Australian accent, Sam Worthington plays Nick Cassidy, an ex-cop but more recently an escaped convict who checks into a Manhattan hotel under a false name, orders himself a lobster and fries breakfast, and then steps outside onto the ledge (What hotel has ever allowed the windows to open?). Onlookers spot him and a crowd quickly gathers, the NYPD inflate an air-pillow landing pad, and local media blitzes the scene. The wise-cracking negotiator Det. Dougherty (Edward Burns) gets his first demand: the man on the ledge wants Det. Mercer (Elizabeth Banks, completely miscast), a washed-up cop with little respect within her department. Dougherty and the other cops are racing to identify Cassidy, while Mercer attempts to coax him inside. But Nick seems preoccupied, on a mission; the movie, taking place within a single day’s events, reveals far too early that he has no intention of jumping, which in turn eliminates needed layers of suspense and mystery for the viewer.

At the same time, Nick’s brother Joey (Jamie Bell) and Joey’s stereotypically fiery Latina girlfriend Angie (Genesis Rodriguez) execute an elaborate heist across the street, all the while yapping comic-relief banter as lovers in movies sometimes do. They bypass seismic and heat sensors to break into the safe of real estate tycoon David Englander (Ed Harris, in supervillain mode), who framed Nick for stealing a massive diamond worth $30 million. The point of the staged would-be suicide is to prove Nick’s innocence. Englander realizes Nick’s up to something by positioning himself across the street, and so he enlists the dirty cops and security goons on his payroll to take Nick down. Meanwhile, Mercer struggles to maintain control with typical jurisdictional jargon, shouting “This is my operation!” into her walkie talkie. As the situation comes to a head, there are plenty of switcheroos and shootouts that flash on the screen, none of it making much sense.

But then, there’s very little about Fenjves’ screenplay that makes sense. With a disturbing disregard for even the most basic movie logic, the filmmakers progress a story that may have some interesting individual scenes, yet never congeals into a whole. Consider a scene where Englander captures both Nick and Joey and threatens to shoot them on the roof in the middle of the day, as though everyone in the surrounding buildings, or the media helicopters in the sky, all no doubt watching the would-be suicide ordeal unfold, would simply fail to notice today’s man-of-interest being shot. The characters themselves make even less sense. Take Mercer, who we first see dead asleep, presumably from a hard night of drinking the evening before; but then later, she mentions how she doesn’t sleep anymore because of a tragic case from her past. Maybe she forgot about being woken up by Dougherty calling her earlier. Or maybe Fenjves has written her to just say things that characters in movies sometimes say, and maybe he does so without any regard for whether or not it aligns with what she said previously.

Everything that happens in the last twenty minutes is a complete blur, hastily written and choppily edited in the hopes that things will progress fast enough so that no one in the audience will notice how sloppily the story resolves itself. Trouble is, the sheer lack of common sense is obvious during the movie, and then even more so afterward upon reflection. When it’s over, the plot becomes so cut-and-dry that even Kyra Sedgwick’s cynical, exploitative news reporter sums up Nick’s victory by asking, “How does it feel to be an innocent man?” I really wanted Nick to say, It feels great! I’m going to Disneyland! Alas, he does not say this or go to Disneyland. Instead, he goes to a bar, where—as if this movie didn’t contain enough clichés—he witnesses an out-of-left-field marriage proposal meant to make viewers say Awww collectively. To elicit that kind of reaction, Man on a Ledge requires low expectations and even lower attention to detail, which mainstream audiences will undoubtedly provide.