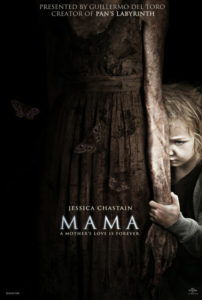 Following a common trend in supernatural horror, Mama begins with a novel premise and compelling characters, but then slowly digresses into bankrupt genre clichés, rampant exposition, and formulaic boo! moments. Spanish siblings Andy and Barbara Muschietti expanded their 2008 short film along with co-writer Neil Cross for executive producer Guillermo del Toro, who did little else except use his namesake to better promote the film’s release under the label “Guillermo del Toro Presents.” Nevertheless, Del Toro’s influence is felt throughout, the story involving children and ghostly apparitions not unlike his own The Devil’s Backbone (2001) and El laberinto del fauno (2006). In the director’s chair on a feature for the first time, Andy Muschietti shows promise, realizing a stylishly hued visual palette and interesting compositions with his cinematographer Antonio Riestra, although his capacity for narrative leaves something to be desired.

Five years after a businessman loses his mind and drives his children out to the woods where he plans a murder-suicide, the businessman’s brother, Lucas (Nikolaj Coster-Waldau), is still looking for his missing nieces. Lucas’ hired searchers find little Victoria (Megan Charpentier) and Lilly (Isabelle Nélisse) living in a ramshackle cabin in the woods, seemingly all alone. Without human contact, the children have lived like animals, claiming they were cared for by someone named “Mama”. After some therapy with child psychologist Dr. Dreyfuss (Daniel Kash), Victoria regains her speech while the much younger Lilly remains feral. To retain custody, Lucas and his rocker girlfriend Annabel (Jessica Chastain), the latter a reluctant parent, agree to stay in a secluded home specially made for Dr. Dreyfuss’ extreme case studies. And it doesn’t take long for Lucas and Annabel to notice that things are off with the girls, and they suspect Mama is more than just the children’s way of dealing with their abandonment issues.

Likewise, it doesn’t take long for Muschietti to show Mama to the audience, revealing her sometimes-jerky, sometimes-wraithlike, and always shadowy presence all too soon. At first preceded by flickering lights, diseased black marks on the walls, and moth snacks, Mama eventually appears in a spectral form via CGI (performed by 7-foot-tall Javier Botet, from [Rec]). And once an “accident” puts Lucas in the hospital, Annabel is left to contend with the two girls alone in this perpetually under-lit house. An extremely talented actress wasted on material beneath her skill, Chastain spends much of her time onscreen wandering around in the dark, asking the girls: What’s in the closet? What’s under the bed? What’s behind me? Meanwhile, Dr. Dreyfuss has discovered some truth in what he assumed was Victoria’s imagined backstory for Mama. The horrific details of a hundred-year-old madwoman are recounted by a suspiciously knowing town hall records keeper who utters lines like, “A ghost is an emotion bent out of shape, condemned to repeat itself time and time again.” Why this records keeper doesn’t have a PKE Meter and Proton Pack is beyond understanding.

About halfway through the film, characters begin to make bad horror movie decisions to keep the plot moving. Whenever someone tries to investigate Mama’s origins at the woodland cabin, they always seem to do this at night. Walking around in the woods alone at night with an unreliable flashlight: never a good idea. Even at the house, Mama rarely makes daytime appearances, if only because ghosts are spookier at night. And what about that house? Why does Dreyfuss have a whole house for case studies? Especially after Dreyfuss stops caring about the children’s mental states and becomes obsessed with Mama’s deranged origins, we expect there will be some morbid hidden secret buried under this house. Alas, Dreyfuss has no shady secrets; we’re not even privy to a CCTV security system or doors that lock from the outside. A missed opportunity to broaden the film’s range of horror, to be sure.

Guttural growls and clicking sounds emit from this unintelligible hovering mass with elongated limbs that is Mama, and Fernando Velazquez’s over-emphatic score stresses every jump scare with predictable high-pitched strings. Mama is the kind of movie monster we want to see in more detail, but the moment the filmmakers show more of her, we wish we’d seen less. Stricken with some kind of mental incapacity and a history that involves stabbing a nun and leaping off a cliff, she’s a fanatical mother whose backstory is supposed to inspire some kind of deep feeling by the climax. Finally, Annabel, her newfound mothering instinct in full force, defends the children from Mama’s jealous wrath. The silly conclusion reaches for Del Toro-esque poetic beauty but instead inspires only confounded head-scratches. What the hell was that all about? was the general consensus in my screening.

Early on, there’s a clever stationary shot where the camera looks down a hallway and into the girls’ bedroom. We see Lilly playing tug-o-war over her blanket with someone we cannot see. Annabel comes down the hallway with a basket of laundry; before she reaches the bedroom, she’s stopped by Victoria, who appears further down the hallway, behind Annabel. Around the corner in the bedroom, the game of tug-o-war is still going on. So now we wonder, who’s playing with Lilly? For this single, rather chilling scene and a few others like it, Mama is worth enduring as a late-night curiosity. But only with the understanding that, even with Muschietti’s technical confidence and polished direction, the film leads to plot contrivances and ultimately a disappointment. Chastain is an added bonus, making the experience better than it has any right to be; without her, it might have been downright unwatchable.