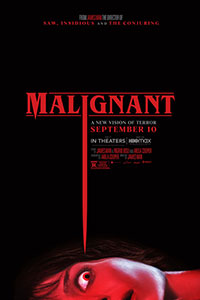 James Wan’s Malignant is a blaring, garish horror movie. The first thing I scribbled in my notes: “Loud AF.” Its volume extends beyond the abrasive music or sound design that tries to force jump scares. Informed by the supernatural subsection of Italian Giallo slashers, Wan turns his score up to eleven, delivers gallons of blood, and explores all manner of brazen camera movements and lighting effects. Even the script by Akela Cooper is loud, giving new information and dramatic twists in soap opera terms. At one point, Madison (Annabelle Wallis), the beleaguered protagonist tormented by the movie’s mysterious killer, reveals to her sister, Sydney (Maddie Hasson), “I’m adopted.” The camera zooms toward Sydney’s face for a sensationalized reaction, capturing the mood of daytime television. From unintentionally funny theatrics to the way Wan blasts every aesthetic flourish, the entirety of Malignant has a go-for-broke quality that might be admirable, except the script proves laughably awful and unconvincing within the first few minutes.

In a prologue set in a research hospital in 1993, a deranged patient shrouded by shadows and accented by red light makes quick work of the medical staff and security guards. Hallway lights explode, the power goes out, broken bodies lie lifeless on the floor, and everyone screams. Wan drops us into the middle of a real horror show, but it’s shot and edited like an action scene. Somehow, in the chaos, the staff gets the upper hand. Then the head doctor announces, “It’s time we cut out the cancer.” Without more clarification, other than the baddie in question has equal measures of bloodlust and telekinetic powers, the movie transitions to today. Those versed in Giallo will recognize the familiar brushstrokes in Wan’s approach by now, which offer a sharp variation in style to his usually spooky supernatural fare. The bold splashes of color bring to mind Dario Argento’s Deep Red (1975) and Suspiria (1977); so do the leaps in story logic and believable character motivations.

Take the initial scenes between Madison and her husband, Derek (Jake Abel). Madison, pregnant, comes home from her nursing job and explains she’s not feeling well. Derek, watching television in bed, suggests she works too much, and that’s why she’s had so many miscarriages. “How many times do I have to watch my children die inside of you?” (There’s that soap opera dialogue again.) Then, he pushes her into a wall and bloodies the back of her head. Madison locks Derek outside the bedroom and, being a nurse, knows that, after a severe head injury, you should take a long nap. While she sleeps, Derek receives his comeuppance from a blacked-out shadow figure—like one of the ghosts from any number of J-horror offerings—who leaves his body mangled. Later, we learn the killer speaks to Madison and calls himself Gabriel. Is Gabriel the devil? Has her childhood imaginary friend somehow come to life? Whatever the explanation, Gabriel dons a black trench coat and starts slaughtering people from Madison’s past—and Madison witnesses each gristly murder thanks to an apparent psychic connection to the killer.

The plot has potential, and shockingly, it’s not based on established intellectual property. Even so, Wan treats the material without moderation and sabotages the story’s surprises. The two detectives on the case, Shaw (George Young) and Moss (Michole Briana White), don’t buy Madison and Sydney’s supernatural explanation. Eventually, they attribute the body count to Madison, who races to uncover secrets from her past that will lead to Gabriel’s identity and her own innocence. However, long before the movie reveals its secrets, we’ve figured it all out. The movie’s not-so-subtle clues keep us at least three steps ahead of the characters, starting with the prologue. When the reveals come, the characters look shocked. We are not. Especially not after Joseph Bishara’s score includes a few notes of the Pixie’s “Where is My Mind?” that will evoke Fight Club (1999) and its themes of split personalities. And thanks to the first scene, I kept thinking about George A. Romero’s The Dark Half (1993).

Wan’s direction has become increasingly bombastic over the years. Malignant makes his debut, Saw (2004), look like a work of immense subtlety. His best-directed effort remains The Conjuring (2013), which, for better or worse, launched a moneymaking franchise at New Line Cinema. Since then, he’s dabbled in bigger, flashier productions like Furious 7 (2015) and Aquaman (2018). The relative restraint of his earlier, more modest horror work is nowhere to be found. In Malignant, even simple exterior shots of Madison’s house feel overdone, captured from absurd angles with wide-angle lenses. The set decoration is wild and nonsensical, too. Consider Gabriel’s lair, which has a massive ventilation fan that suggests he’s holed up inside an abandoned industrial factory. When we later discover the lair’s residential location, the fan no longer makes sense. As the leaps in the basic story or visual logic add up, our investment gradually dwindles.

Wan’s style-over-substance approach aligns with his Giallo-inspired aesthetic, though it’s best left to Italians in the ‘70s and ‘80s (or Luca Guadagnino). Malignant aims for a sensory overload, but not in the delightful ways of Argento or Mario Bava. The movie’s gore-soaked killings give way to the epically violent last 20 minutes inside a jail cell, followed by some videogame-worthy action featuring Gabriel against an entire police department—as though Wan hoped to combine his horror movie experience with his recent penchant for actionized blockbusters. Such sequences are enjoyable in isolation. Yet, the characters prove underdeveloped, and the actors have no chance at overcoming Wan’s stylistic ostentation. Aside from a few impressive flourishes and the admirably weird central conceit, Wan’s storytelling fails to secure our investment. At nearly two hours, Malignant drags and flails; worse, it never manages to produce much feeling—and that includes scares. But it sure makes a lot of noise.