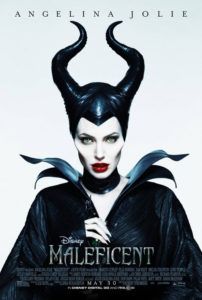 A revisionist take on Disney’s animated classic Sleeping Beauty (1959) by way of the Broadway hit Wicked, the live-action feature Maleficent rewrites the fable from the villain’s perspective to make her a sympathetic figure. The animated Maleficent was pure evil in the most enticing storybook ways and originally looked like a thin Bette Davis voiced by Eleanor Audley. Here, the titular sorceress was actually a young and innocent woman wronged by an ignoble king and driven to wickedness by a broken heart. Angelina Jolie brings the character to flesh, but not to life; Jolie looks the part and plays her humanized character with pointed regality, though the forced doses of sentimentality in the film are overly schmaltzy, even for Disney. For all its potential, the exploration of Maleficent’s emotional underpinnings and dimensionality are contained within a film beset by Linda Woolverton’s clumsy screenwriting and a glaringly uneven tone.

The film opens with storybook-styled narration by none other than (cue a dramatic swell in James Newton Howard’s score, hold, and wait for it…) Sleeping Beauty, introducing us to a land where the human world lies next to The Moors, a world of fairies and fantastical creatures. A young faerie princess named Maleficent (Isobelle Molloy as a child, Jolie later), complete with horns and feathered wings, meets human boy Stefan (Michael Higgins as a child, Sharlto Copley later), and they fall for one another. As an adult, Stefan’s ambitions for the throne drive him to seduce Maleficent and cut off her wings to become king. Maleficent soon garbs herself in all black, finds herself shape-shifting crow man-servant Diaval (Sam Riley), and crashes the christening of King Stefan’s first child Aurora. She proclaims Aurora will be stricken with a curse on her sixteenth birthday; the girl will prick her finger on a spinning wheel needle and fall into a death-like sleep that can only be broken by “true love’s kiss”. And since Stefan soured Maleficent’s belief in true love, Aurora would be doomed to sleep forever.

In the brief sequence where the spell is cast, which is almost line-for-line taken from Sleeping Beauty, the film is an impressive live-action rendering of a cartoon classic. But it’s followed by a long stretch of lighthearted screentime devoted to Aurora’s upbringing in a woodland cottage, where King Stefan has sent her to grow up seemingly out of Maleficent’s reach. She’s raised by three blundering fairies (Isabelle Staunton, Lesley Manville, and Juno Temple), largely CGI-based characters designed for comic relief but frustratingly unfunny. Maleficent watches from a distance as the baby grows into a blindly optimistic teen, now played by Elle Fanning, who looks to Maleficent as a “fairy godmother”. The two become close and eventually, Maleficent begins to regret her behavior, but any chance at reconciliation with the paranoid King is hopeless, and a final showdown seems inevitable. The script altogether forgets about the Queen (Hannah New) and instead finds reasons to incorporate underwhelming battle sequences. Meanwhile, Aurora remains a one-note character rooted in innocence; her late-appearing love interest, Prince Phillip (Brenton Thwaites), is even less interesting.

From beginning to end, the film suffers from a tonal undecidedness, hinting at the troubled behind-the-scenes production. Fantasy-obsessed producer Joe Roth (Alice in Wonderland, Snow White and the Huntsman, and Oz: the Great and Powerful) convinced Disney to shell out an estimated budget of $200 million for the long-gestating project—which was designed for Jolie as a concept; the script came later. Once Jolie signed, Woolverton cranked out the story. Avatar production designer and first-time director Robert Stromberg was hired by Disney to helm after Tim Burton turned down the job, but Stromberg’s inexperience led to feel-good director John Lee Hancock (The Blind Side and Saving Mr. Banks) being hired to assist and re-shoot additional scenes. As a result, lighthearted fairy tale scenes with starry-eyed fantasy creatures are intercut with darker sequences that feel ripped from the moodier sections of The Lord of the Rings. At one moment, Maleficent may be cracking jokes with Diaval; the very next, she’s drenched in tears or maniacally laughing as evil witches often do. The opposing tones never quite reconcile.

To be sure, nothing much about Maleficent works. Stromberg’s fantasy world design is uninspired and unmemorable; the story doesn’t engage emotionally; the storybook narration throughout is overly explanatory; the special effects look like shoddy green screen work, with actors clearly standing on a different plane than the background setting. All the while, Jolie looks the part (although Rick Baker’s makeup gratuitously exaggerates her already pronounced cheekbones), but her delivery, particularly in emotional outbursts, is overblown to unintentionally funny extremes. Still, the muddled scripting is the worst offender. Not enough time was spent developing the romance between Maleficent and Stefan, which becomes so crucial when detailing the gravity of his betrayal. None of the characters feel emotionally real, and therefore their dramatic grandiosity is unaffecting. Roth’s other fantasy pictures are usually accompanied by an ample length that allows the story to deepen familiar characters, except everything in Maleficent‘s 97-minute runtime feels not only rushed but inconsequential. By the end, one cannot help but wish that Disney had left Maleficent a fascinating villain instead of a dull protagonist.