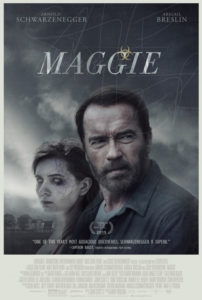 In Maggie, Arnold Schwarzenegger plays an anguished father who ruminates over putting his zombified teen daughter out of her misery. The star’s wholly serious presence in this zombie drama is rare not only for his solemn performance, but also because he’s appearing in this low-budget, independent production. After his reign as Governator, Schwarzenegger hasn’t had much luck regaining his former glory as Hollywood’s go-to, big-budget action hero. Disposable junk like The Expendables franchise, The Last Stand, and Sabotage has left him looking for a challenge or something different, apparently. And while Schwarzenegger brings undeniable weight to his portrayal, first-time screenwriter John Scott 3 gives the actor little to do, except walk around with a constipated expression and a heavy brow.

The world is on the downswing from a pandemic called the “necroambulist virus.” Infection rates have decreased and the government seems to have the worst of it under control, but new victims are still being treated. Schwarzenegger plays Wade Vogel, a farmer whose daughter Maggie (Abigail Breslin) runs away to the city and gets herself bit. In this iteration of zombism, the victim takes several weeks before “the turn” and gradually deteriorates during that time. Newly reported victims such as Maggie are allowed to return home with their families, but when she begins showing signs of the last stage of transformation—signified by a heightened sense of smell—her family is expected to deliver her to a quarantine area, where she will be terminated.

Once Wade returns Maggie to their farmhouse, her two younger siblings are sent away for their own safety. Maggie’s stepmother Caroline (Joely Richardson) remains behind and tries to act unafraid of what’s coming—visible as Maggie’s bite wound blackens, her eye turns milky white, and black veins crawl under her skin. Meanwhile, the family receives reminders of what’s to come when their neighbors show up undead, and Wade has to dispose of them with an axe. Local cops pay a visit and check Maggie’s status, warning Wade that if he doesn’t take care of her, they will. And Maggie’s boyfriend Trent (Bryce Romero) is also infected, but he’s much further along in the transformation process and the police carry him away. As Maggie continues to degrade and becomes more aggressive, such as eating a caged fox, Wade struggles to make a decision, believing that some part of his daughter is alive behind her rotting zombie veneer.

Making his feature debut is director Henry Hobson, best known for creating the title sequences on several blockbusters. Hobson put this farmhouse drama together for a meager $4 million, using ponderous shots of the landscape and emotive faces to fill his runtime. The genre mash-up crosses plot elements of Old Yeller and Grace, but Hobson’s stylistic approach has more in common with the works of Terrence Malick, specifically Malick’s Days of Heaven (1978). Hobson and his cinematographer Lukas Ettlin shoot in the dreamy light of the magic hour, accomplishing countless scenes where Wade walks through his fields and thinks about his choices. In one scene, Wade burns his contaminated field, and Ettlin mirrors a shot from Days of Heaven when the locust-ridden fields are set aflame and the farmer’s silhouette is illuminated in the night by the orange blaze. Evoking Malick in a zombie movie is either brave or pretentious; given the phony quality of everything onscreen, let’s call it pretentious.

Too slow to appease zombie fans and too inert to satisfy anyone looking for a film of real substance, Maggie is a fatalistic chore where virtually nothing happens for the duration. From the first moments, Wade and his daughter are faced with a conflict. For nearly the entire 95-minute runtime (which feels much longer), Wade thinks. He thinks and thinks and thinks. Schwarzenegger doesn’t have the acting chops to make his character’s internal thoughts an interesting viewing experience. It’s not completely his fault; the screenplay doesn’t form an adequately developed character study, either. At the same time, Breslin offers a clumsy, angsty teen performance similar to her turn in Haunter. (Check out Zombieland for a better Breslin zombie yarn.) By the end, not one moment of this dull, plodding story achieves the emotional profundity Hobson and his screenwriter hoped for, nor are there any genuine scares to be had. It’s hard to imagine who Hobson was making this film for, cult zombie fans or serious dramatists, but neither are likely to take much away from Maggie.