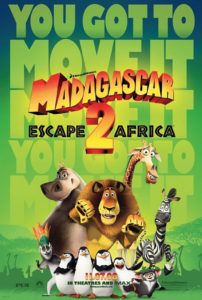 Madagascar belongs to the continent of Africa, floating off its southeastern shores and housing all sorts of animal species avid Animal Planet viewers are more than familiar with. Among them reside four escapees of New York’s Central Park Zoo, whose arrival to the massive island nation was documented in 2005’s animated blockbuster Madagascar. Now there’s a sequel called Madagascar: Escape 2 Africa that attempts to describe the premise with its title.

Except, they’re in Africa already. By leaving Madagascar, they’re escaping from Africa to Africa. Maybe the minds behind the title chose to ignore this geographical inaccuracy, or perhaps they were just so desperate to render the sub-title’s preposition into a number that they didn’t care. No doubt some hotshot marketing guru at Dreamworks Animation couldn’t pass up the opportunity to input the number “2” into the title with hip and trendy results. This decision adds to the Dumbing of America. (Parents, before the movie begins, explain to your child that Hollywood failed Geography class, and then buy the kid a globe for his or her next birthday.)

Anyway, all the same characters are back, not really learning any new lessons. But did they learn anything in the first movie? Are they any wiser? Do characters like this grow, or do they exist merely to prance around in scatterbrained movements and make poop jokes? After realizing they were stuck on the seemingly un-industrialized island, the zoo animals try to launch a crashed airplane across the ocean back to America. Had they bothered to explore, they’d find Madagascar is brimming with twenty-million human inhabitants. But they don’t, and so they end up on mainland Africa where each stumbles upon the respective animal grouping from which they came.

There’s Alex the lion (voice of Ben Stiller), who discovers his family in a story arc that warrants major comparisons to The Lion King. Marty the zebra (Chris Rock) joins a herd of his kind and finds there’s no such thing as anonymity within a species. Gloria the hippo (Jada Pinkett Smith) meets a male of equal girth but realizes her tastes are for thinner fare, and instead begins batting her eyes at Melman the giraffe (David Schwimmer). None of these individual storylines advance beyond the mundane.

All the main characters are once again overshadowed by the secret agent exploits of the film’s band of penguins, always hilariously maneuvering in unison toward some master plan. Strange that, despite Happy Feet and Surf’s Up, animated penguins still retain their cuteness. Watching them dance, catch a wave, or konk-out unsuspecting victims with their wings never ceases to be adorable. Lions and zebras and the rest, who needs them? Dispose of the throwaway characters and leave what works: An espionage movie set around penguins.

Having helmed the first, Eric Darnell and Tom McGrath returned to direct this sequel, offering little evidence that they learned anything on the first go-round. The animation has improved some, thought I suspect superior technology is to thank for that. Designs still rely on geometric shapes and angular bodies to represent the animal kingdom, their fine details elaborated by better computers. Pervasive butt-shaking humor should be expected. And don’t forget the irritating use of “I Like to Move It”, which could only be more annoying if replaced by “Who Let the Dogs Out?”

Take it as a positive that Madagascar: Escape 2 Africa didn’t inspire me to rant about its despicable nature, rather just dismissively cope with its banality. Unlike its predecessor, I wasn’t maddened with boredom. Perhaps I was desensitized by the first. Once again, 5-year-olds will eat it up, teenagers will say its kids’ stuff, and adults duped into chaperoning a trip to the movie theater will struggle in their seats to make it through.