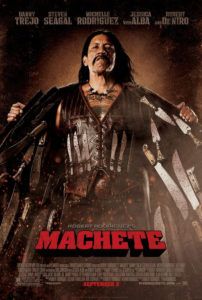 Given the origins of Machete, which was teased back in 2007 as a fake trailer on Robert Rodriguez and Quentin Tarantino’s double-bill Grindhouse, there are certain expectations that follow: An intentionally grainy presentation riddled with deliberate audio and video errors? Check. Over-the-top gore and nudity fitting the needs of exploitation-driven B-movies? Check. A cast of popular actors having fun with the irony of their presence in such a consciously shoddy production? Check. Mindless entertainment value that defines what it means to be a “guilty pleasure”? Not really, no.

Instead of a satirical exploitation picture in the form of Tarantino’s Death Proof or his own Planet Terror, Rodriguez aims for an outright, timely political message about illegal immigration over the U.S./Mexico border. The result is reminiscent of Rodriguez’s Once Upon a Time in Mexico, being a film that juggles too many interesting characters in far too complicated a plot, and then doesn’t give the characters or the plot their due time to saturate. And while the political commentary makes its mark—including some hilarious campaign ads from Robert De Niro’s sleazy Texas senator’s anti-immigration platform—the film has such a blunt message that it feels contrary to the Grindhouse model.

Rodriguez favorite Danny Trejo plays the title role, a sort of Mexican Shaft who scores with all the ladies and whose badassery knows no bounds. One look at Trejo’s face, and it’s obvious this actor has a sordid past (indeed, view 2005’s documentary Champion to learn of Trejo’s history of drugs and criminality before cleaning up and turning his life around). And his face is used to grisly effect as his character goes from idealistic federale, to lowly day laborer, to renegade vigilante. But Trejo hardly blossoms as an actor here, playing it one-note all the way. Rodriguez isn’t concerned either; he’s more interested in moving on to the next scene where something cool is happening, but by the time he gets there, there’s already something else he’s more interested in. The movie feels so preoccupied with trying to get in gags and political jabs that it forgets to entertain.

After his family is murdered by Steven Segal’s criminal overlord Torrez, Machete finds himself in the underground network, organized by Michelle Rodriguez’s revolutionary leader/taco vendor. He takes a job for slimy hoodlum Jeff Fahey to assassinate De Niro’s intolerant senator, who wants to place an electrified fence on the border. But a double-cross makes Machete a wanted man by the authorities, the criminals who hired him as a patsy, and a gang of white trash goons (led by Don Johnson) hunting illegals on the border. Machete fights back against everyone. Meanwhile, Jessica Alba plays an immigration officer whose principles about American immigration laws are changed when she sees her people struggling with corrupt forces like De Niro’s character. Through it all, there’s contrasting violence and political discussions, followed by too much talk of cell phones and texting—which feels entirely too modern for what’s intended to be a throwback picture.

Rodriguez shares directing credit with Ethan Maniquis, a longtime partner who’s been apprenticing as editor and visual effects supervisor for years, since Desperado in 1995. Rodriguez is no stranger to sharing directorial credit, such as the acknowledgment on 2005’s Sin City given to Tarantino and Frank Miller. No doubt Machete has prepped Maniquis for a solo directorial effort—perhaps one of the two hinted sequels. Alas, Maniquis needed to learn an important lesson here that clearly wasn’t communicated: Know your audience’s limits. The film goes on for much too long, concerning itself more with the “Revolution” plot than the bloody absurdity of Grindhouse fare. Reduce the runtime by fifteen or twenty minutes and the result would compare to the non-stop pace of Rodriguez’s Planet Terror, an enduringly enjoyable bad movie.

Of course, there’s plenty of splattery stabbings, decapitations, explosions, and eye-poppings to keep the audience entertained. And it’s a pleasure to see actors like Fahey and Tom Savini, because they do corny so well. Yet it becomes repetitious and drags. Much of it (namely a subplot involving Lindsay Lohan, and all of Alba’s acting) does not work, and about half-way through you begin wondering why the film isn’t over yet. Machete was best left as a trailer suggesting a movie that would never happen, like the other Grindhouse previews (Edgar Wright’s Don’t, Eli Roth’s Thanksgiving, and Rob Zombie’s Werewolf Women of the S.S.). The fatal flaw is that Rodriguez and Maniquis delve into the sobering topic of immigration more than they propel nonstop trash, and though normally this critic likes his ultra-violence served with a side of politics, their approach doesn’t live up to what Rodriguez and Tarantino did in 2007.