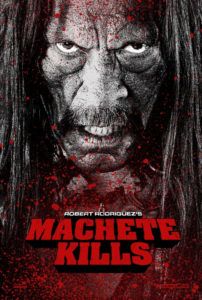 A better concept than a movie, Robert Rodriguez’s sequel Machete Kills takes after its 2010 predecessor in that it’s less concerned with celebrating B-movie tropes than its other, otherwise unrelated preoccupations. Based on a tease at the end of Machete, which was inspired by a mock-trailer before Planet Terror, Rodriguez’s half of the exploitation homage Grindhouse (presented alongside Quentin Tarantino’s Death Proof), the sequel suggests an embrace of bloody schlock, sexuality, and the juxtaposed casting of both notable names and washed-up actors. But the result is a far cry from its surprisingly artful and intentionally lowbrow roots, never once living up to the original Tarantino-Rodriguez concept. Where Machete spent the better part of its runtime on an ungainly political commentary about American-Mexican immigration relations, the sequel, while still retaining some half-hearted politics, would rather set-up the third part of a trilogy, called Machete Kills Again…In Space.

Machete Kills also takes after its predecessor in that it’s a better trailer than a fully realized movie. In fact, the end product feels like an exhausting series of tangential storylines cut together in the editing room to create the semblance of a narrative, of which there’s little. For a movie that’s supposed to be paying regard to a subset of gleefully trashy cinema with shoddy storylines and low production values, Machete Kills has far too much going on and, while it doesn’t look like an A-list production, it looks perhaps more polished than it should. Rodriguez doesn’t fully embrace the silliness of grindhouse movies; there’s a suspicious feeling throughout that he’s faking it, or simply going through the motions of realizing what began as an in-film joke. Even with Machete, Rodriguez gave up on the sound pops, missing reel gags, and grainy photography that made his Grindhouse entry so pleasurable. He replaces those technical snafus with forced attempts at drama, a latent discussion about immigration, and a plot so busy the audience is bound to feel lost.

Danny Trejo returns to his most popular role, and his leather-faced scowl and one-note delivery of monosyllabic dialogue are unwaveringly intact. His character does as the title suggests: he chops off heads and limbs, and he rips out his victims’ intestines and tosses them into various propellers for a massive splat. To avenge the death of his partner (Jessica Alba), Machete accepts a mission from the American President (Charlie Sheen, credited by his birth name Carlos Esteves) to take down the mad revolutionary Mendez (Demian Bichir) in exchange for a pardon and U.S. citizenship. After bedding his handler Miss San Antonio (Amber Heard), Machete discovers that Mendez is just a patsy for crazed arms manufacturer Luther Voz (Mel Gibson). Voz has an army of clones and futuristic gizmos in his arsenal, including a space station orbiting Earth—all as part of his plot to blow up the planet and create a new world order under his rule. Not if Machete, and his one-eyed underground Mexican Network leader Luz (Michelle Rodriguez), can help it.

Except, instead of getting after Voz, Machete contends with pointless side-characters who serve as filler and extend the runtime to the excruciatingly long 107-minute mark (then again, the movie feels long after just 20 minutes). Sofia Vergara plays Desdemona, a Mexican madam with breast cannons and a crotch gun (the same one Tom Savini used in Rodriguez’s From Dusk Till Dawn) in charge of a group of vicious whores loyal to Mendez. Also after Machete is El Camaleón, a face-changing hitman (played by Walton Goggins, Cuba Gooding, Jr., Antonio Banderas, and Lady Gaga). None of these supporting roles amount to much and serve only to increase the star-studdedness of the cast. Sheen uses his presence as another eye-rolling testament to his self-satisfaction, complete with references to “winning” and his taste for prostitutes (enough already, Mr. Sheen). Gibson’s role is certifiable, but he has some fun playing a Star Wars-obsessed maniac, though not enough to make the movie endurable. Trejo is reduced to more “Machete don’t…” lines, which wore out their welcome after the first movie.

Rodriguez incorporates one or two amusing asides, including a “Put on your 3-D Glasses!” sex scene and the promise of a gloriously campy looking Machete Kills Again…In Space trailer. But Machete Kills is little more than setup for the forthcoming space adventure (and in that respect ends flatly on an Empire Strikes Back-inspired finish), which no doubt will be a better trailer than a movie. Most of the plot lines developed in this sequel are left unresolved for later exploration in the third and hopefully final chapter. Worst of all, Rodriguez has made a dull movie with none of the laughs or tonal consistency of Planet Terror. And after the dullness of Machete Kills, one has to wonder if Rodriguez’s will still have an audience for this story and character. What’s evident is that the director’s cinematic in-joke has run its course and has now entered overkill mode; it’s ceased to be fun and instead become a chore to sit through.