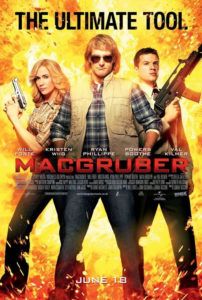 Based on the Saturday Night Live skit of the same name, MacGruber purports itself to be a no-holds-barred action-comedy that spoofs the popular show MacGyver—enough even to risk an R-rating, despite its target audience being of the teen demographic. Its title star, Will Forte, sports a blond mullet, plaid flannel, tan vest, and shades, not unlike the show’s original star, Richard Dean Anderson. The original skit featured our witless hero attempting to diffuse a bomb with only seconds to go, but then he’s sidetracked by some inconsequential conversation with his lady sidekick, Vicki St. Elmo (Kristen Wiig), and boom—no more MacGruber. And yet, each week he returned to be blown up again.

Producer Lorne Michaels has had a lousy track record bringing short skits from SNL to the big screen. Remember The Ladies Man, Stuart Saves His Family, or Superstar? Amid movies derived from sketches that barely remain funny for 5-minutes, much less 90, Michaels finds his most memorable efforts when he’s simply backing one of his show’s alumni in an autonomous venture, unrelated to any property from his late-night sketch comedy program. Titles like Three Amigos and Tommy Boy hold up better than any based-on-a-skit concept could. And MacGruber is no exception, although it certainly had the potential of being something better than average.

MacGruber is The Best, having an absurd amount of military accomplishments and medal acquisitions: He’s an ex-Ranger, ex-Navy Seal, earned 3 Congressional Medals of Honor and 16 Purple Hearts, and played as the tight end for the University of Texas-El Paso. We learn all this because the rookie soldier-cum-partner, straight man Lt. Piper (Ryan Phillippe), recounts it to MacGruber (and the audience) in typical action movie exposition. Piper and his commanding officer, Col. Faith (Powers Boothe), enlist MacGruber in a save-the-world scenario to stop supervillain Dieter Von Cunth (Val Kilmer) from detonating the biggest bomb ever on American soil. MacGuber breaks out his sassy red Miata, with its detachable Blaupunkt tape player, and enlists a team to stop Cunth (say it aloud to get the beaten-to-death joke).

Laughs are frequent but not particularly memorable. The script by Forte, director Jorma Taccone, and Will Solomon attempts to build on MacGruber’s claims of awesomeness. For example, while driving his Miata, he’s cut off by another driver, and so MacGruber obsessively remembers the license plate. He whispers it to himself repeatedly, and then Piper later finds a notebook with the plate number eerily written over and over like a serial killer’s journal. We know something horrible and hilarious will eventually happen. But when it does happen, the script underplays the moment. The same can be said for the visual effects in MacGruber’s “main move”, throat-ripping. Or MacGruber’s promise of how he’ll finish off Cunth. When we eventually see his signature move acted out, or Cunth finally confronted, these moments feels like they could and should have been gorier, if only to appropriately exaggerate the already exaggerated humor.

Much of the comedy is based in awkwardness and stupidity and shock value, rendering it instantly dated. There’s a funny but predictable pair of scenes involving a pantless Forte and Phillipe with a celery stalk. Two sex scenes are hilariously explicit and loud, complete with MacGruber’s profane pillow talk and incessant moaning. And when MacGruber tries to get the upper hand on Cunth by announcing his exact whereabouts during a covert operation, the audience can’t help but chuckle. But just like your average Will Ferrell comedy, the audience can take only so much “Isn’t he stupid!” humor before the result grows tiring, and eventually annoying.

Imagine a version of MacGruber that follows the model of Robert Rodriguez’s Grindhouse film Planet Terror, acting as an intentionally cheesy, but otherwise straight presentation of bad filmmaking. The comedy would be there, but it would be no more outrageous than the impressive action scenes, allowing the movie to work on more than just one level. If we’re laughing and awed by elaborate stunts and unbelievable effects at the same time, then the movie is something more than just a punishingly long version of forgettable sketch. But this is an action-comedy that forgot the action part of its equation, leaving only the base comedy to entertain us. Unfortunately, that isn’t enough.