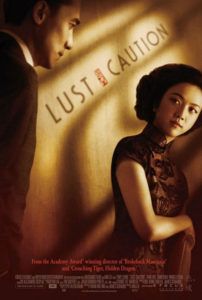 In 1942, four women in Hong Kong play Mahjong, in a very comfortable room given the state of occupancy in their city. Mr. Yee (Tony Leung) enters, finely dressed; he greets his wife (Joan Chen) and her three friends. Mrs. Mak (Tang Wei) glimpses at him from her peripheral; as Mr. Yee leaves the room, he returns the glance. Clearly, something sordid has occurred between the two and no one is the wiser. In the next scene we see Mrs. Mak talking in spy code in a restaurant phone; we cut to a group of shabby looking ruffians cocking guns in preparation for a hit. Four years prior to that, Mrs. Mak wasn’t known by that name. She was Wong Chia Chi, a young student whose father had moved away to England to make a new family; he says he’ll send for her when he has enough money, but never does. She agrees to be the lead in a politically rousing play, despite wanting to perform in melodrama; her mind is changed by the play’s attractive student director Kuang (Lee Hom-Wang). Hopes are that they’ll raise funds to help the Chinese resistance, and that can’t be accomplished with melodrama.

When their play succeeds, Kuang and his idealistic young troupe decide to take further measures. Rather than join the resistance themselves, they plan to assassinate a known traitor, torturer, and interrogator: Mr. Yee. To do so, someone must get close to him. Who better than their star actress Wong Chia Chi? Wong Chia Chi assumes the false identity Mrs. Mak, the wife of a black marketeer; she makes sure she gets involved in a love affair with political target Mr. Yee. Their first sexual encounter takes place years after she first goes undercover. By then, the sexual tension between the two has boiled over, and their first session enters into rough, sadomasochistic territory—Mr. Yee’s reputation as a violent interrogator does not precede him. It’s a difficult scene to watch, but Ang Lee’s sex scenes are more than mere adages onto an espionage thriller. Here they serve as insight to how Mr. Yee and Mrs. Mak eventually fall in love. As they do, the sex calms, becomes passionate, the most tender moments finally arising when the two can’t help but kiss or hold their heads close.

Ang Lee’s persistent theme throughout his career has been people struggling with claiming themselves, despite societal, political, or social constraints, with sexual identity being one of his primary concerns. In Lee’s movie The Ice Storm, several middle-class families in the 1970s arrive at disaster chiefly from sexual confusion through their rampant flirtation. In 2005’s Brokeback Mountain, Lee explores the unwavering desire to pursue love no matter the cost. Often, a lover in his films is the conduit through which his main character understands themselves; here is no exception. Eventually, Lust, Caution’s explicit scenes mature into ballads of passion and love. We are no longer struggling to watch, but held by their complexity. They’re like bodily conversations, emoting with movement and physical expression; they’re the most truthful moments in the movie. Ang Lee and Focus Features agreed not to make any cuts after the MPAA damned the film with a dreaded NC-17 rating. The result limited the picture’s release to art house theaters, meaning less money but artistic satisfaction for Lee, who instead of filming tasteless sex, films sex as metaphor.

This is the first film for twenty-eight-year-old actress Tang Wei, but she plays it like a pro. She evokes several characters in one: she is the innocent Wong Chia Chi, the proud Mrs. Mak, and then the torn victim inside both personas. Her cover dives deeper and deeper as she and Mr. Yee sink into each other, until her heart’s torture becomes worse than anything Mr. Yee might carry out behind closed doors. She wants so desperately to remain loyal to her side, praying that one day the resistance will shoot Mr. Yee so it can all end. Another part of her loves him like nothing else.

Both Black Book and Lust, Caution examine similar themes. I won’t suggest that the latter picture steals from the former; I don’t believe that, despite what some critics imply. Rather, they compliment each other, serving as cultural and wartime signifiers, and also as markers for how two strong filmmakers approach relatively the same subject. Each film’s main character sacrifices pieces of herself. Wong Chia Chi serves up her heart and everything she knows of herself onto a platter, while Black Book’s Rachel Stein gives that too, only much more outwardly. Lee broods over his subject with a slow pace that, against the thrills of Black Book, seems tiring. In a way, that’s also the best part of his picture—Lee’s focused contemplation of the affair juxtaposes the rival barriers preventing their love. Lee seeks deeper emotionalism than Verhoeven’s film, but without the grandiose entertainment value in addition to severe emotional thrills.