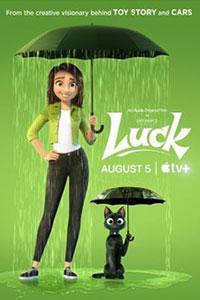 Luck marks a few firsts. It’s the debut feature from Skydance Animation—a new animation house formed when Skydance Media acquired Ilion Animation Studios, the makers of Wonder Park (2019). After inking a deal to produce computer-animated movies and television shows for Apple TV+, the studio bows their first of two releases slated to appear on the streaming platform (and in limited theatrical release) in 2022. It’s also the first film with John Lasseter’s name attached since he stepped down from Pixar in 2017 following accusations of sexual misconduct. Lasseter was made head of Skydance Animation and serves as executive producer here, and his fingerprints are all over Luck’s premise. The story explores the notion of good and bad luck as elemental forces controlled by an elaborate system of machines and functionaries in a hidden dimension, similar to the raveled concepts in Pixar’s Inside Out (2015) and Soul (2020). Except, something’s lacking here. Despite the shimmering animation and intriguing setup, the film doesn’t crackle or astonish. On the surface, everything’s in place for an inspired work of animation, but the result is unremarkable.

How surprising, since Luck boasts some impressive talent, starting with director Peggy Holmes, who worked as a dance choreographer before helming several direct-to-video Disney sequels. The screenplay comes from Cars (2006) co-writer Kiel Murray, as well as Jonathan Aibel and Glenn Berger, who penned the Kung Fu Panda trilogy. The voice cast consists of recognizable names, while Lasseter’s oversight should have raised the standards of everyone involved. But the film feels less like a breakthrough than a work of reverse engineering, as though the filmmakers at Skydance watched the entire catalogs of Pixar and Studio Ghibli and tried to replicate their formulas. Bits and pieces from other, superior animated movies have been sewn together here to make a fine-looking garment. However, pull on its loose threads, and the entire thing reveals itself as a knock-off, albeit well-tailored. With the conceptual framework of a Pixar movie and a sprinkling of cute Minion-like bunnies over the proceedings, Luck is familiar stuff—even its poster resembles a famous image from My Neighbor Totoro (1988).

The story opens with the world’s unluckiest person, Sam Greenfield (voiced by Eva Noblezada), who has just turned 18 and aged out of her orphanage. Sam has been constantly overlooked by potential families, a condition of her chronic bad luck that causes klutzy mishaps and everything in her life to go wrong. If there were a loose banana peel, she would slip on it. But Sam wants her young roommate at the orphanage, Hazel (Adelynn Spoon), to have a better childhood. Being superstitious, Hazel collects lucky charms that she believes will help get her adopted. So after moving into an apartment and getting her first job, Sam picks up a lucky penny for Hazel but quickly discovers the universe works in her favor when she possesses the coin, which isn’t actually a penny after all, given its curious shamrock insignia. With the coin in hand, she’s graceful, successful, and fortuitous—until she accidentally flushes it down the toilet. It turns out the lucky coin belonged to a talking black cat named Bob (Simon Pegg), who needs his coin back. Hoping to ensure Hazel finds a “forever family” with the coin’s help, Sam pursues Bob into the Luck World to acquire another like it. 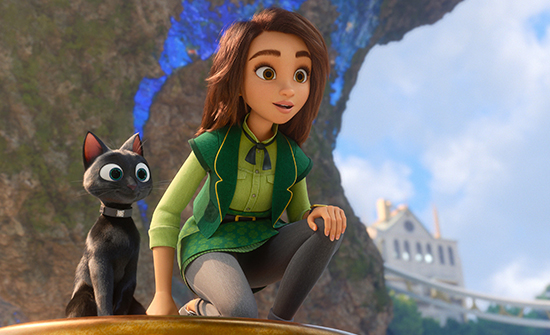 From this promising start, Sam finds herself introduced to an endless procession of rules and world-building in exposition-heavy dialogue, delivered by Bob in a Scottish accent. Bob tells her about the leprechauns and bunnies (as in rabbit-footed) that work to distribute good luck to humans. Departments such as “Happy Accidents,” “Right Place, Right Time,” and “Lucky in Love” engineer felicitous events, all overseen by a luck dragon CEO (Jane Fonda). There’s also a Bad Luck World populated by trolls and root vegetable people, and they seem preoccupied with finding new ways of getting dog poop onto your shoe. Together, the two worlds use a randomizer, overseen by an amusingly Swedish unicorn named Jeff (Flula Borg), to distribute good and bad luck particles to the masses evenly. Sam and Bob must traverse these worlds to find the MacGuffin to help Hazel, all without alerting the captain of security (Whoopi Goldberg) or upsetting the balance of luck particles.

All this planning around the even distribution of luck raises questions about the main character. Sam’s bad luck, the source of countless accidents and setbacks in her life, seems to have been assigned randomly. But if these worlds are supposed to create an equilibrium between good and bad, why is Sam’s luck so awful? Another studio like Pixar may have found some degree of profound emotional reasoning or narrative conceit to explain this kink in the works. Maybe a villain has been targeting people with bad luck particles for some nefarious reason. But the screenplay never provides an adequate answer—it doesn’t even ask the question. Instead, it prompts more nagging plot holes than satisfying answers. When Luck ends with a message that good luck and bad are a matter of perspective—Sam’s bad luck wasn’t horrible after all; she just needed to adjust her outlook—it feels not only like a cop-out but causes the film’s entire concept to collapse. If Sam’s perspective is the answer, doesn’t that render the efforts of these two worlds that manage luck particles entirely pointless? And if the good luck particles are causing Sam bad luck and strain in the short term, maybe those in charge of the good luck need to reevaluate their approach.

With its shaky story logic and a rather bland protagonist who’s just along for the ride, Luck contains plenty of cracks in its glimmering veneer, even in the animation. Notice how the mouths don’t quite move with enough expressivity or accurate articulation when speaking, lending characters a generic doll-like appearance, especially Sam. Skydance struggles with something Pixar wrestled with for years: natural human movements and faces. However, they have lighting elements and the more fantastical characters down—I especially liked the look of Bob and Jeff. The animators put on a splendid light show with adorable creatures, rollercoaster-like buildings, and fantasy tech, all in a convincing atmosphere you can almost touch. Unfortunately, some of the designs appear generic, almost emoji-like, and most of the Luck Worlds’ characters would look at home on a cereal box. Yet, many of these minor visual quibbles could have been overlooked with a tighter script.

Overall, Luck is the type of G-rated fare that parents will load onto Apple TV+ for their children and soon realize that there’s not much here for adults, and they can leave the room. It has the quality of something manufactured to keep kids distracted—lots of moving parts, bright colors, cute talking animals, some obligatory dancing to Madonna’s “Lucky Star” (of course), and harmless potty humor. Whereas other animation studios attempt to mine deeper emotions, Luck is surface-level stuff, proving it takes more than Lasseter (and a minor role played by Pixar voice regular John Ratzenberger) to mimic the Pixar model. All of that said, Skydance demonstrates some impressive animation at times, suggesting that with the right script, they could be capable of something significantly better. We won’t have to wait long to find out, given that their sophomore feature, Spellbound, will arrive this fall, and their third feature comes from writer-director Brad Bird (The Incredibles). Here’s hoping that Luck allowed Skydance to learn some lessons and that what comes next is an improvement.